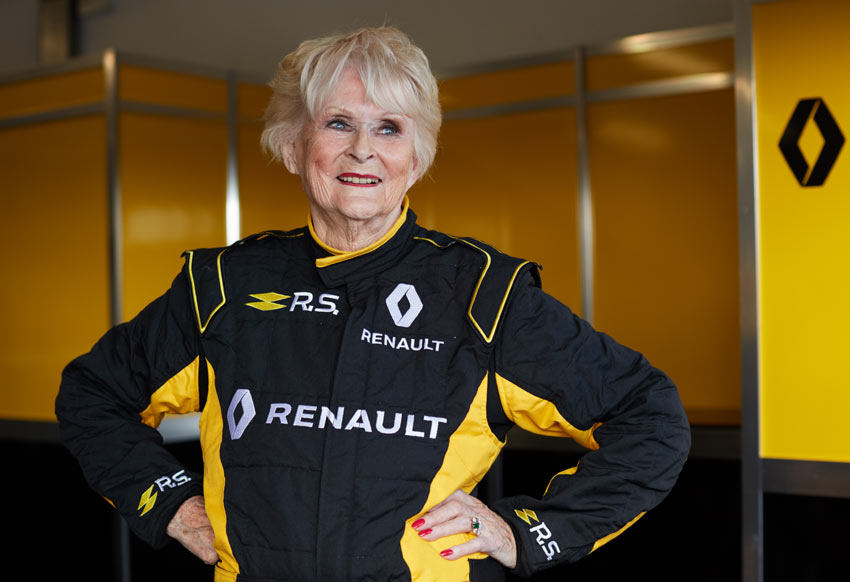 At 79 years old, rally driver Rosemary Smith is proving age is just a number as she fulfills her lifelong dream of driving a Renault Sport Formula One Team car!

Rosemary initially trained as a seamstress and opened her own dress shop, which unexpectedly became her route into the world of motorsport when one of her clients invited her to navigate in a rally. However, it wasn’t long before the Dublin-born craver of excitement switched to driving and the silverware soon followed.

The Irish racer competed in some of the most iconic rallies around the world, taking home many trophies despite disqualifications and people looking to hold her back in the notoriously male-dominated sport.  A particularly poignant victory was the famous Tulip Rally, which she won in 1965, an achievement which made not only the motorsport world take notice but also Hollywood, with Elizabeth Taylor and Richard Burton sending her a huge bouquet and congratulatory letter.

After years competing and winning at the highest level in world rallying, Rosemary set up her own driving school using Renault Clios and for the past two decades has campaigned for young driver education to be introduced in schools across the country.

Despite these achievements, Rosemary never got the chance to partake in arguably the greatest motorsport experience – driving a Renault Sport Formula One Team car – until now.

With encouragement from long-term friend and navigator, Pauline Gullick, in addition to Palmer, Rosemary soon got to grips with the single-seater, increasing her confidence with every lap of the renowned Circuit Paul Ricard in Le Castellet, southern France.

Speaking of the experience Rosemary said: “Driving an 800bhp car is something I, like many other racers, have always dreamt of but I didn’t think I’d ever have the opportunity to do it, so when the team at Renault UK contacted me I jumped at the chance. It was definitely very different to the rally cars I’m used to but was an amazing experience. I could feel myself getting more and more comfortable with the single-seater and being able to speak to Jolyon, driver to driver, also helped when the nerves did kick in.

“After racing and facing the challenges of competing in a male-dominated sport together for many years I was so happy that my friend Pauline was able to share this latest milestone and give me that extra boost. It just goes to show that anyone can fulfil their dreams at any age if they put their mind to it and always follow their passions.”

James Boyer, Marketing Director, Groupe Renault UK, said: “Rosemary is a truly inspirational racer and woman who so strongly embodies our guiding principle of passion for life, so it was a privilege to help her achieve her dream by driving a Renault Sport Formula One™ Team car as part of our 40th anniversary celebrations. It was great to see her out on track, pushing herself to get everything she could out of the experience.

Dave Monk, Executive Creative Director from Renault’s advertising agency, Publicis London, who created the campaign, said: “It’s not very often you unearth a story like Rosemary’s, she’s a remarkable woman, a tremendous athlete, and embodies the kind of passion for life we can all learn a lesson or two from. I think this piece of work will resonate with hearts and petrol heads alike.”

Five things to know about the new Renault Mégane RS