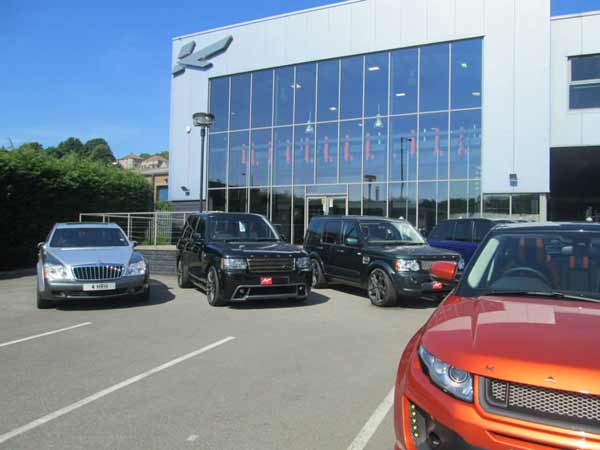 Kahn are a company dedicated to the creation of luxury vehicles. Geraldine and Suzanne recently visited their HQ in Bradford

I’m cosseted in the supremely comfortable driver’s seat, struck by the splash of red on the rev counter and clock. I haven’t yet turned the ignition, distracted by the opulent red seat belts. Everywhere luxury swathes you like a cashmere scarf. Harris Tweed graces the quilted front and rear bucket seats, roof lining and even the sun visors. From the quality of the red and silver contrast stitching to the machined aluminium pedals the detailing is exquisite. Backseat passengers get the same retrimmed bucket seats.

The most remarkable aspect of all is that I am not sitting in a Bentley or Rolls-Royce but a Land Rover Defender, a rugged go anywhere workhorse. But then this Defender is no ordinary one, this one has been given the Kahn treatment, a company dedicated to the creation of luxury vehicles.

By stripping cars to their core, Kahn Design, one of the world’s leading automotive fashion houses, has transformed some of the most desirable cars on the planet into unique creations.

The rich and famous have always craved to convey their power and inspire admiration through individuality.  This is not new; go back thousands of years to the Egyptians whose lavishly adored battle chariots were as much symbols of power as they were transportation.

Today most cars share a similar style, form and function and few car makers really manage to set their cars successfully apart from the crowd.

So while tuning houses such as Alpina or Brabus focus on making cars go faster for Afzal Kahn, the principal designer and owner of the company that bears his name, making them look and feel more special is what defines their approach. Kahn provide bespoke modifications that can essentially transform a vehicle in its entirety, from wheels, body kits to custom paint jobs, if you want it Kahn can make it happen.

Combining subtle automotive styling and a European fashion designer label philosophy he has a gained a worldwide following. Clients include stars such as Justin Bieber, Quentin Tarratino, Arnold Schwarzenegger and Daryl Hannah.

From a modest start selling alloy wheels, in 2004 Afzal Kahn moved to full car customisation and became known worldwide for his stunning personalised cars. His strength lies in unique wheel designs and state of the art accessories created by his automotive design company in Bradford. Today his showroom houses an envious collection of super cars from Lamborghinis, Ferraris to Bugatti Veyrons.

Over the course of the day we had the opportunity to drive not only the Defender but also its arch rival the Jeep Wrangler, a Range Rover Evoque and even Afzal Kahn’s own Range Rover.

On the road both of the Land Rovers feel much like standards cars and are thus beautiful to drive. In both the exterior has been enhanced but it inside that has been given the most focus and the interior has been lavishly transformed but the intrinsic Range Rover driving dynamic has been left intact. The Jeep Wrangler Sahara 2.8 diesel has been modified inside and out in a more extreme and menacing way and while it looks the part the Defender is better to drive.

“I wouldn’t call myself a car fanatic but more of a designer.” Says Afzal who has set his sights on building the Kahn name into a lifestyle brand synonymous with style.

Four new showrooms will open in London this summer and Kahn are actively looking for partnering opportunities in Europe and even Ireland. It seems cool is the same in every language. And if you ever wondered what happens to those Lamborghini wheels and seats carefully discarded in the pursuit of perfection, then check out Ebay, you may just bag yourself a bargain.

So what did we drive?  Suzanne Keane explains in detail some of the exquisite Kahn creations we sampled at first hand