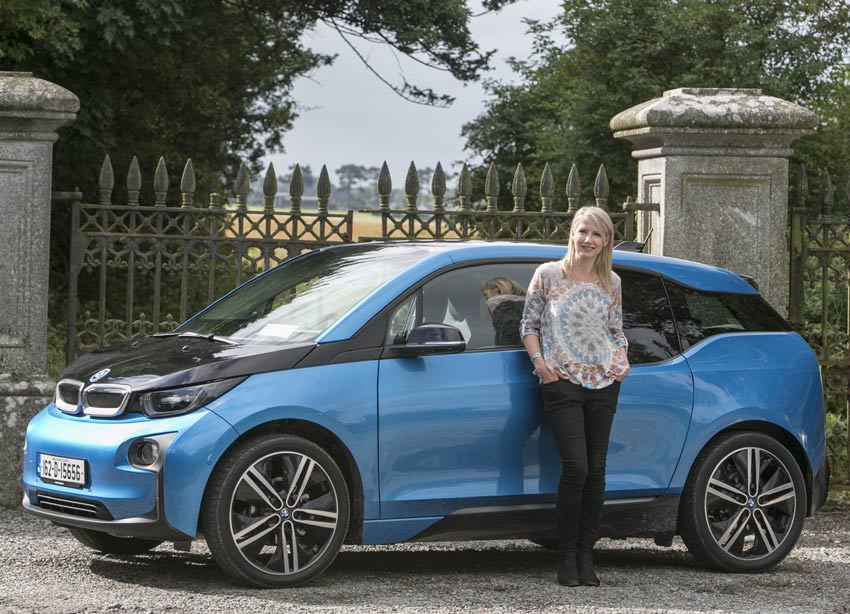 Geraldine Herbert with the BMW i3. Pic by Kyran O’Brien

Electric cars are considered by many to be too pricey, too impractical and too likely to run out of charge but is the  new BMW i3 about to change that perception asks Geraldine Herbert

What is it?  The i3 was launched as part of BMW’s ‘Project i’ or electric range of cars and is available as an electric only version or with a supplementary petrol engine that extends the range. When it launched two and a half years ago, one of the biggest criticisms was its limited range but this has now been addressed by a mid-life upgrade that increases battery capacity by 50%.

Who is it aimed at? If you have a short commute, a second car and a dedicated, fast, wall-mounted charger, then an electric anything might start to make sense.

Styling? Outside it’s funky but inside it’s futuristic and free from many of the design constraints of more conventional cars. It is also minimalist with Teutonic attention to detail.

Under the Bonnet? The electric motor, developed and produced specially for use in the BMW i3, generates an output of 170bhp and provides maximum torque or sheer pulling power of 250Nm from the moment the car pulls away.

What about inside? Space in the front is good but there is only room for two in the back, with quite restrictive legroom. There is however, plenty of headroom plus the rear-hinged doors and no B-pillar means it’s simple to get in and out of. Practicality is not one of the car’s strong points and with just 260 litres of boot space, you’ll find more room in the back of a Ford Fiesta or Renault Clio

On the Road? On the road, the i3 goes from 0 to 60 in 7.3 seconds with 170 hp and 250 Nms of torque but it feels much faster as it is light and aerodynamic, thanks to the extensive use of carbon fibre. The steering is well-weighted but the ride is firm and some may describe it as harsh. Each can be independently selected so there is a host of configurations depending on road surface or weather.

What about range and charging?  Charging the BMW i3 takes about four hours with a BMW i Wallbox but considerably longer if you are relying on a standard three-point plug. On paper, the i3 boasts a very impressive 313 km range but within a few days you quickly discover that the range depends on what mode you have it on and how you drive it. The weather also makes a difference. As with the previous version, there is a choice of three driving modes; Comfort, which allows the maximum 170 bhp and 250 Nms; Eco Pro that limits the maximum speed to 130 km/h and increases efficiency while Eco Pro+ restricts the top speed to 56 mph. Driving it exactly as I would any normal car, I found the range worked out at somewhere between 100 – 120 miles per charge.

Will it break the bank? It isn’t cheap; it’s certainly not cheap for a city car and starts at £32,330 on the road, while the one fitted with the reassuring petrol engine range extender has an on the road price of £35,690

Verdict?  When you weigh up the pros and cons of electric car ownership, the cons are most certainly diminishing but electric cars are still not a viable option for everyone.  Our test car came with an on the road price of £32,330. The new battery in the i3 means it is now much more flexible to use but you still have to forward-plan journeys so it doesn’t offer quite the convenience of a conventional car. Despite this the i3 is an incredibly clever and modern car that allows you to bask in green virtue as you get from A to B.

Why you won’t?  Pricey