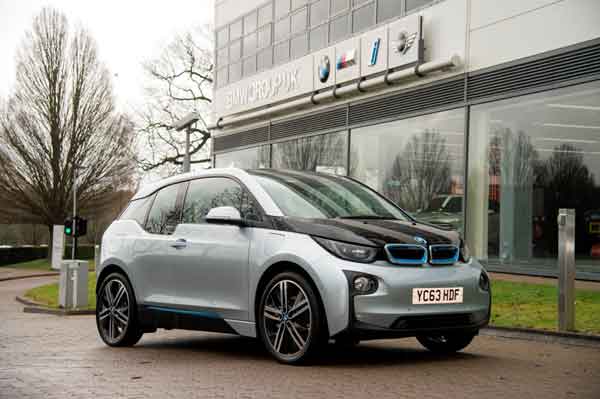 Is futuristic styling and a nifty drive enough to make the BMW i3 a game-changer in the electric car market, Geraldine Herbert finds out

What is it? The i3 is BMW’s first foray into the electric vehicle market and was designed from the ground up to be an electric vehicle. The “standard” i3 has  an electric motor which will allow you go about  80 –100 miles before you need to recharge. Recharging takes about 8 hours from a standard domestic three pin plug.  There is also a range-extended version (REX), the difference here is the addition of a 650cc petrol engine, what that does is it allows the battery to regenerate on the move so the range  you can drive  is increased to  about 180 miles.

Who is it aimed at? According to BMW this five door four seater i3 has been created primarily with the needs of the 21st century urbanite in mind.

Styling? With the traditional kidney grille it may be instantly recognisable as a BMW but the i3 is about as new as a car can be.

Under the Bonnet? Our  i3 Range Extender (REX) is powered by an electric motor plus a tiny 650cc petrol engine.

What about inside? Slide behind the wheel and instantly it feels roomy and really spacious particularly as there is no centre tunnel dividing the interior. In the middle of the dash sits a large touch screen unit and everything is distinctly clutter free and very futuristic. Space in the back is not great but there is certainly enough room for four passengers plus the rear hinged doors and no B-pillar means it’s simple to get in and out of.

On the Road? Press the start button and the first thing you’ll notice is just how eerily quiet it is, even at full speed the only noise is the sound of the tyres making contact with the road. And thanks to a host of weight saving devices it’s certainly not slow off the mark. It’ll get from standstill to 100 kph in 7.9 seconds, which is only slightly slower than the MINI Cooper S,  but push this car to the detriment of your battery power, the harder you drive this car the faster your resources diminish.

Electric cars don’t work like petrol powered ones and there is definitely a knack to driving one, this becomes more apparent the longer you spend behind the wheel  but once you get to grips with the difference the i3 proves itself a nifty little sporty car. On the road it handles surprisingly well, despite being high off the ground it corners well and is stable at motorway speeds. Disappointingly the gearshift  is at times  a little jerky and abrupt. 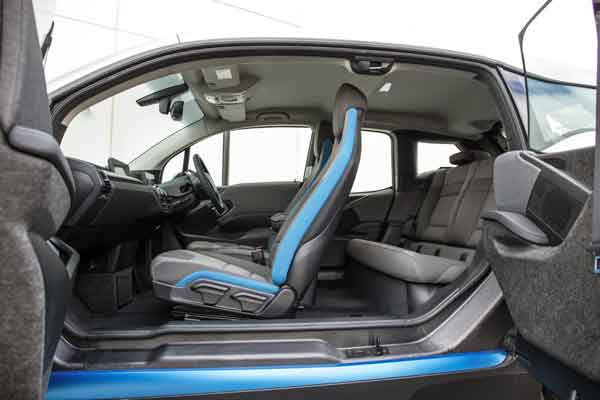 The i3 is available with four different interior worlds: Standard, Loft, Lodge and Suite.

And Safety? When crash tested by the EuroNCAP the i3 received only four of a possible five stars due to poor performance in the pedestrian impact test. It scored well on adult and child occupant protection and comes with all of the safety devices expected of a BMW. To read the full safety report click here

Options? Apart from the choice to extend or not to extend there are also four different interior trims: Standard, Loft, Lodge and Suite.  All feature sustainable materials such as sustainably sourced wood, natural fibres and naturally tanned leather.

Economy?  According to BMW the i3 can achieve a mindblowing 0.6 litre per 100 km which equates to about  471 mpg, and emits just 13g of CO2 per kilometre.

Verdict? When it comes to introducing new technologies, in most cases the companies that are first to market are those who enjoy the most success. BMW may be late to Team electric but the i3 is a groundbreaking addition. Electric Vehicles are still a niche market and while they are likely to remain that way for a while the arrival of a BMW electric car to the market is  a serious mark of confidence. It is fun to drive,quirky inside and out and with the range extended facility the BMW i3 is a really clever car but it’s not without its downsides. Our test car came with an on the road price of  £28,830. The key to making electric cars more popular is simple, sort out range anxiety and price them competitively. The i3 certainly address the former but still falls short on the latter.

Why you’ll buy one? Fun to drive; Super frugal; Futuristic