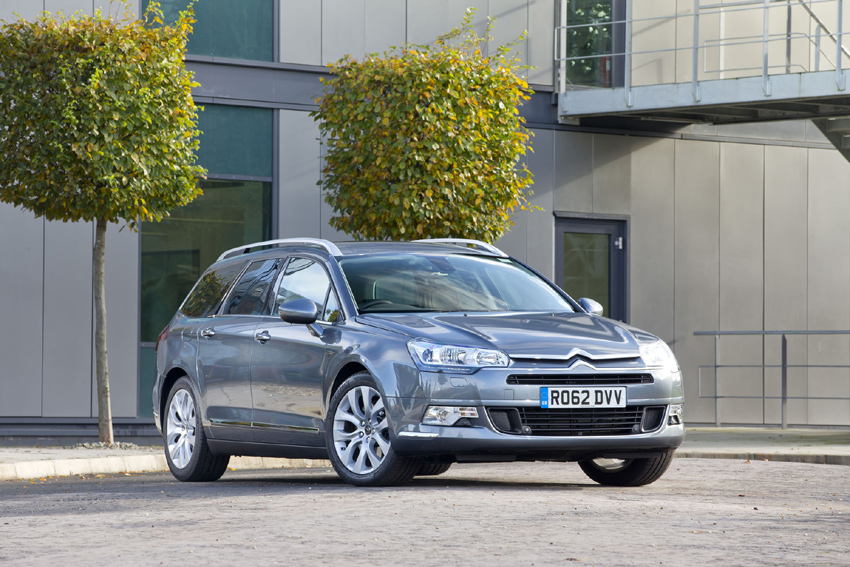 What is it? The C5 Tourer is Citroen’s latest luxury large car aiming to topple the German stronghold within the executive car market.

Who is it aimed at? The C5 Tourer is really only aimed at the business rep and family markets due to its size, engine options and equipment. Also available in a saloon guise, the Citroen C5 Tourer is a substantial creation that would easily haul the overzealous packing of a family just as well as an SUV.

Styling? Citroen haven’t always created the best looking cars, but the C5 has had to become a better looking beast if it wants to compete with the likes of Audi and BMW. The outside is sleek and elegant with lashings of chrome that contrasts nicely with the Haria Grey metallic. The test car came with 19 inch Adriatic alloys that gave the car a more sporty stance. Overall the C5 Tourer looks to be near enough on par with its German rivals in exterior styling.

Under the bonnet? The C5 is only available with a diesel engine ranging from a 1.6 litre to a 2.0 litre diesel, the latter available in both manual and automatic. The 2.0 litre diesel in the test car had a top speed of 130mph, 0-62mph in 9.3 seconds and was easy to get along with. The engine grumbled when asked to travel at low speeds in a high gear but became refined when cruising along the many miles of motorway.

What about inside? This for me is where the car lets itself down, the leather pack was an optional extra which included the electric heated seats and are the most comfortable seats I think Ive ever had the pleasure to sit in. But the the centre part of the steering wheel doesn’t move and my driving style meant that sometimes my hand became trapped, there is a never ending array of switches and buttons that can become confusing, the satellite navigation doesn’t allow a postcode to be entered and the dials can be difficult to read. Its all just rather busy and badly laid out which can lead to dangerous distractions when driving. Another major problem is storage, there is one cup holder in the front, and only if you are a skilled contortionist would you be able to reach it. The space within the cab is vast though and 5 adults can fit comfortable inside. 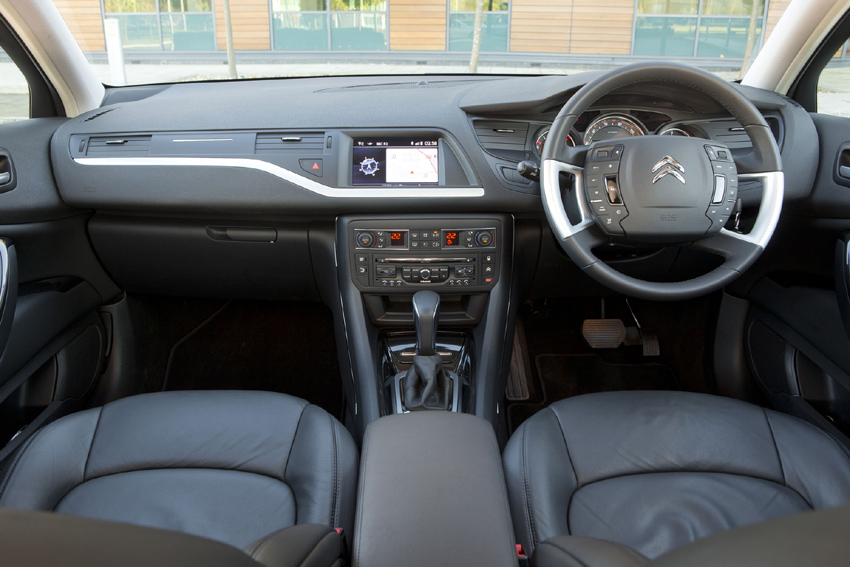 On the road? You could say the ride quality is the C5’s trump card, the Hydroactive 3+ suspension ensures a smooth and refined ride with self levelling and a function that lowers the car at 70mph to reduce drag and improve stability. This car is an exquisite ride for long motorway journeys, but give it some welly into the corners and it can become a lumbering walrus. The steering is too vague especially during mid corner, but given its size it is still an impressive package for driving enjoyment.  The optional 19 inch wheels do produce a bit of road noise noticeable within the cabin.

What about Safety? You can feel safe in the knowledge that the C5 is one of the safest cars on the road, 5 stars NCap safety record, Electronic Braking Distribution (EBD), Emergency Braking Assistance (EBA) and Isofix anchoring points as standard all ensure the passengers are protected as much as possible. There is also an SOS button located on the dash that can be pressed in case of an accident that alerts the emergency services.

And Options? The Citroen C5 Tourer Exclusive Techno has a monumental list of standard equipment that means that there are only 7 other options available. Options worth getting are the glass panoramic roof at £605, the leather pack at £975 and the upgraded 19 inch alloy wheels at £195. Other options include metallic paint, xenon dual function headlights, rear lateral airbags and an upgraded Hi-Fi system that to be honest wasn’t that much better at £550.

Will it break the bank? I drove the C5 a lot and for such a big vehicle the fuel economy seemed staggering, I’m sure the 71litre fuel tank helped with this but I barely visited the fuel station at all. Citroen’s figures state that the combined cycle is 55.4 mpg and the CO2 emissions are 133g/km putting it into Band E and a £130 per year tax bill.

So the Verdict? The C5 Tourer has a lot to live up to especially with Citroen being so open about its mission to match the German executives. Its also in competition with the likes of the Vauxhall Insignia and Ford Mondeo which are firm favourites of the business rep. But the C5 is one of the most comfortable drives available, it looks better than a lot of the competition and comes with a hugely impressive standard package. For me the interior is a little bit wacky and the lack of storage in the front is impractical. The boot space is on par with most in its class apart from the Volkswagon Passat that could fit a small country into its huge 650 litre boot space. Citroen’s of past also had reliability issues and the resale values can plummet especially on larger vehicles. But for Citroen this is a massive step in the right direction.

For more information on the Citroën C5 Tourer check out Citroen.co.uk  or the Citroen UK facebook page.