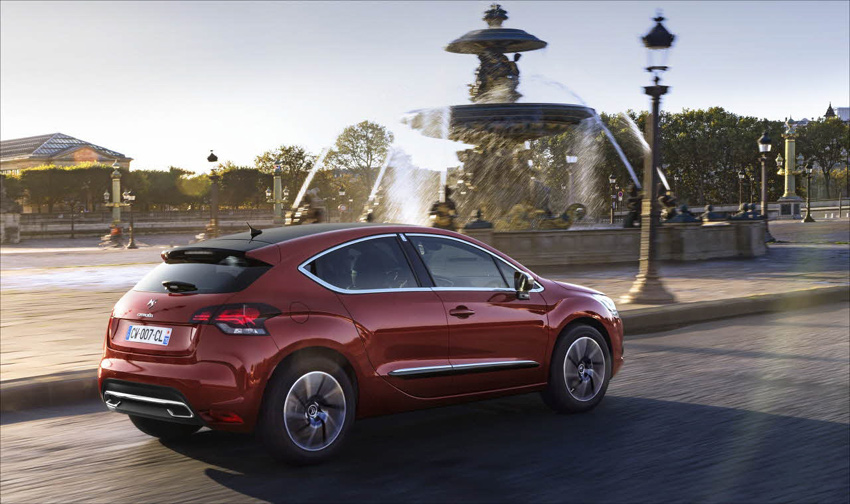 Part hatchback, part SUV can the DS4 be all things to all people asks Hannah Gordon

What is it? As described by DS, this is a high stance 5 door coupe and separates itself across many sectors including the hatchback and SUV markets.

Who is it aimed at? Due to the DS4’s coupe styling it really limits space inside so is not practical for a family. The DS badging and avant-garde design mean the DS4 could appeal to the young and trendy market, its an unusual concept that would appeal to people who want to stand out from the crowd.

Styling? The DS4 has a striking exterior impression and the curvaceous body style leads over the flanks and into a bulky rear end. The hidden rear door handles give the DS4 a more coupe look and add to the sporty design. Front LED running lights and a sculptured bonnet give the DS4 a meaningful poise. Its a great looking car, but due to the raised suspension it looks odd sitting so high.

Under the bonnet? There are 8 engine choices for the DS4, 4 petrol and 4 diesel so you are sure to find an engine that suits your driving needs. The test car had the 1.6 litre turbo diesel with 120bhp. The engine pulls well, but can feel sluggish when asked to produce extra power at high gears and so I would definitely try out the more powerful 150bhp diesel for driver enjoyment. When pushed the engine becomes frantic and when the automatic gearbox is put into sports mode this un-refinement becomes worse.

What about inside? The DS4 is a nice environment to be encapsulated in, the dash is well put together and the 7 inch touchscreen provides most of the controls which frees up the rest of the dash space. The seats are extremely comfortable and a suitable driving position is easily achieved. The cabin feels roomy in the front, primarily due to the elongated window screen. In the rear its a different story, seating in the back is cramped and being unable to put the rear windows down is a strange omission. Trying to even enter the rear seats is like an obstacle course due to the tiny gap of the rear door.

On the road? The unique styling of the DS4 means that it rides particularly high and this doesn’t help its road handling. The car crashes over bumps and the suspension is too harsh, the ride never really settles down and mid corner becomes agitated over undulations. Take the DS4 on a long cruise and its a perfect companion, its just a shame that windy country roads are not as fun as they should be.

What about Safety? The DS4 got a 5 star Euro NCAP rating and comes with ABS, Hill start assist and traction control all as standard. There are plenty of warning chimes to inform you when you have left your seat belt off or haven’t put the handbrake on. The DS4 also comes with an anti mis-fuelling device to stop you putting the wrong type fuel in your car.

And Options? There is a very generous list of standard features on the DS4 but options include Pearlescent paint (£730), Contrast pack that includes painted roof and wing mirrors (£375), Leather pack (£1390) and Security signature which has blind spot monitoring, front parking sensors and reverse tilting wing mirrors that is an extra of £320.

Will it break the bank? The 1.6 litre diesel engine has impressive economy figures and emissions of just 103 g/km of CO2 means that the road tax is free after the first year. A combined figure of 68.9 mpg puts it among the most frugal hatchbacks in the market. A 3 year/60,000 miles warranty puts it behind other manufacturers with their warranties though.

So the Verdict? The DS brand is aiming to become more separate from the Citroen branding but its going to be difficult, the DS4 sets out to be a car that covers many genres but its almost a ‘jack of all trades, master of none’. The styling is attractive and the interior is certainly a nice place to be but the ride quality and luck lustre engines dull the enjoyment. Its a confusing concept and should just be a hatchback or an SUV, but it is sitting in a market that no one else sits in, and it is easy to see why.

Why you’ll buy one? Competitively priced;

For more information on the DS Brand check out Citroen.co.uk , the Citroen UK facebook page