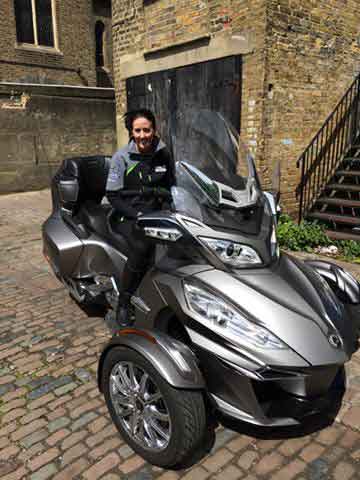 Sinéad Canny went to North East London to test drive  BRP’s new 2014 Can-Am Spyder RT.  Not what you call a glamorous setting, but with a machine as mystical as the Can-Am, scenery was the last thing on her mind.

What is it? Probably the most asked question according to the dealers when people first feast their eyes on it.

The Can-Am Spyder is a three-wheeled motorcycle manufactured by Bombardier Recreational Products (BRP). The vehicle has a single rear drive wheel and two wheels in front for steering, similar in layout to a modernsnowmobile.The manufacturer refers to it as a “roadster,” but in technical terms it is more of what has been traditionally called a trike. It’s a touring roadster and the ultimate in comfortable open-air riding.

First impressions of the New 2014 Can-Am Spyder RT:  Wow. An animal like front design makes you take this beast seriously, sporty alloy wheels, sleek lines and a slim rear that tames the animal that is viewed from the front.  The leather seating area is immediately enticing for either the driver or the passenger.

What about the interior? The two dial dashboard is slick but providing the right level of information without overly complicating things. As already mentioned, the leather seats are wonderfully comfortable and there are great rests for your feet whether you are driving or a passenger.  The control buttons are relatively basic but do the job they are intended – when quick decisions are needed when controlling this trike, you need to get to the button required without being confused.

And behind the wheel? I like alot people are new to the Cam-Am concept so it was back to school to learn how to drive one of these machines.  Mark at GS Jet Tech could not have been more patient as he gave me a detailed briefing of the semi-automatic transmission model before letting me explore the car park in which we initially tested (I did have fun weaving in and out of the Learner Drivers who were also using the car park to practice their hill starts and 3 point turns!).  Then I got to follow him on my own in the RT while following him on his Can Am around the roads of South Woodford.  The drive was smooth, the throttle was sensitive but easy to control once you got used to it and the breaking was very natural.  You simply lifted your right foot from the foot rest and pressed the brake pedal as naturally as you would in a car. We drove local roads in heavy Saturday traffic and It never felt difficult or tedious stopping, starting, speeding up or slowing down.  I then had the opportunity to take the Cam-Am out on the busy dual carriageway of the London South Circular.  This is where the Rotax 1330 in-line 3 cylinders engine came to life.  The drive was so smooth and the 115 horsepower was addictive.  Hitting 54 mph came as a surprise when I looked at the clock and I guess this was helped by the electric windscreen which you can raise well above the eye level meaning that you are protected from the wild wind that was blowing. Mark had shown me how to work the built in ipod which I cheekily turned on.  I actually forgot that I was on a three wheeler and could easily have been sitting tight in a very quick and comfortable car.

How Much? The RT price starts at £19,699 sterling  for the manual transmission model and £20,800 for the semi-automatic model.

How Safe? The RT comes with traction control, ABS brakes, Vehicle Stability System and Power Steering. There is a safety card in a pull out slot above the dash which you are reminded to read every time you switch on the engine.  You are also provided with a safefy DVD and encouraged to take a training course where available.

What about my options:  There is an RT, RTS and an RT Limited model available in the range.  All three have the same engine size; 1330cc Rotax Ace in line 3 cylinders, liquid cooled with electronic fuel injection and electronic throttle control. The model various where the finishing is concerned.  The RT model is available in manual transmission and semi-automatic but the RTS and Limited edition are only available as a semi-automatic transmission. Colour options include just black for the RT Standard, The RT-S is available in Pearl white or Cognac  while the RT Limited comes with a choice of Blackcurrant, Cognac and Silver Platinium.

Wife of Dickie and Mum to Annie, based in London. I try and keep out of trouble by looking after the marketing of a fantastic brand in the week but when the weekend hits, I'm busy rallying cars or co-driving for some of Ireland's best rally drivers. You can follow Sinead at @sineadcanny