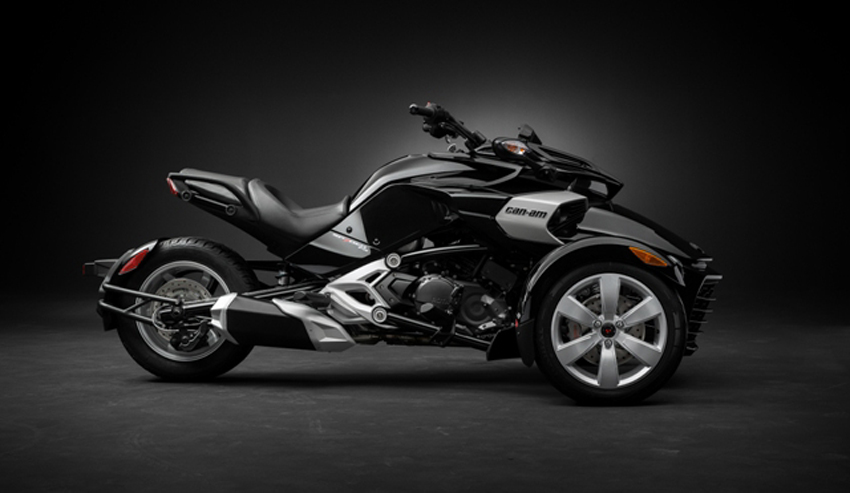 The Can-Am ‘trikes’ back! – We drive the  2015 Can-Am Spyder F3, the three wheeled trike that promises the thrills of a motorbike writes Hannah Gordon

We have all become a nation of miserable workaholics, unable to switch off our screens and social media devices and just go out into the open road and treat the rumbling tarmac as our playground. Looking at my diary I am very much guilty of this, as I turn each page its full of work, and believe me I’m not complaining but after spending the morning riding a Can-Am Spyder F3 I was left to think whether I had become one of life’s wandering souls in a robotic day to day scheduled jungle.

Many years I have had a nagging thought about taking my motorbike licence and feeling the freedom that owning a motorbike apparently gives. Many of my friends ride and it always felt like I was missing out, having broached the subject with family and loved ones I always felt like the look of horror I received was like I had just told them I was a serial murderer. Having now nearly reached my 30’s I know I am possibly old enough to make grown up decisions but still the ingrained memory of ‘the look’ has remained with me. What better way to feel the freedom and air rushing over me than on a trike. Like a motorbike just theoretically a bit safer.

Turning up at GS Jet Tech in North London in what can only be described as a typical summers day (lashing down with rain) and being very unsuitable dressed in a pair of jeans and what I would consider a suitable coat, but would later let through more water than it kept out. I was there to test the new Can-Am Spyder F3, a massive positive with the Can-Am range is that they can be driven on an ordinary car licence. Around a Y frame design the Spyder F3 is a handsome looking machine and has an innovative Ufit system that allows the rider to customise the seating position making it an optimum fit. The overall riding position is extremely comfortable and pedal operations are within easy reach. Sitting in between your legs is a Rotax 1330cc, 3 cylinder engine that produces 115 hp and weighs just 386kg. This set up enables the Sypder F3 to hit 60mph in less than 5 seconds and to seriously rearrange your facial extremities if you’re not wearing a suitable helmet. But the fun is not just in the speed, yes the Spyder F3 is extremely fast but it also has plenty of electronic aids to help the rider out if the right hand gets a tad excited, there is stability and traction control, anti lock brakes and dynamic power steering that give you that piece of mind when pushing the F3.

The Spyder F3 comes with either a manual or semi automatic 6 speed gearbox with a reverse gear. The gear changes are a lot smoother than previous models and there is less of a delay on change up. The exhaust has a gruff sporty note which sounds great on acceleration, the suspension is kept stable by aluminium shocks to the front and a monoshock to the rear. If the technical jargon hasn’t interested you then the next bit will definitely have you signing on the dotted line, the Spyder F3 has storage, 24.4 litres of it, not massive but certainly enough to fit a bit of shopping in.

Having not ridden a motorbike before the whole experience of being on a machine with limited protection and heightened vulnerability was a daunting prospect, and has to be said took me a while to get used to. The added benefit of buying from the guys at GS Jet Tech is that you are given a comprehensive walk around including what all the controls are, I was then taken to a car park where i was able to test out acceleration and braking without being on the open roads and putting myself or others in danger. And its this customer service and expertise that really helps put your mind at ease if you haven’t ever ridden a motorbike or a trike.

The Can-Am Spyder F3 is such a fun piece of kit, and it surprised me how much I enjoyed my morning riding these trikes. To gauge my enjoyment was that even though I had torrential rain for the whole test I returned back to the shop with a huge smile on my face and a wet pair of trousers. The Spyder F3 felt safe and due to the huge amounts of safety systems in place I could enjoy being out on the slippery roads, the seating position is comfortable and you could easily ride the F3 for long distances, something the designers have obviously taken into account. There’s something about being out in the open air, the exhilarating nature of bike riding and the sense of freedom that prevails, its addictive and it brings across a child like happiness. As I left GS Jet Tech I wasn’t bothered about the uncomfortable wet trousers I had, I was just disappointed that up the road was my everyday car when really all I wanted was my helmet back on and a road trip with the Can-Am Spyder F3.

Check out the video below