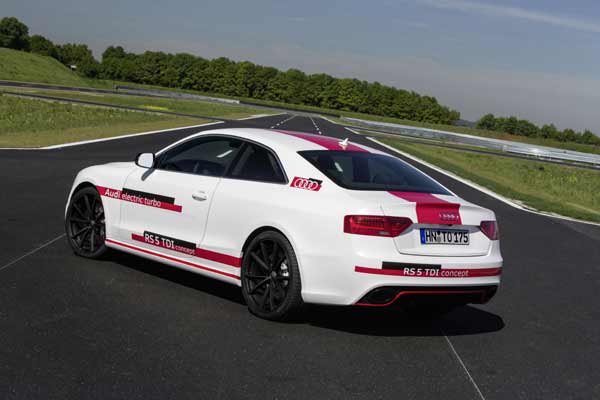 Can two turbos and an electric supercharger make the Audi RS5 TDI Concept a high performance diesel? We put it through its paces on a Swedish track to find out writes Geraldine Herbert

What is it? Purists may baulk at the idea of a high performance turbodiesel model but not Audi. In 2006 they became the first car manufacturer to enter a TDI engine in an endurance race when they competed in Le Mans and with eight wins in nine years Audi clearly know a thing or two about making fast diesels. Now Audi are seriously showcasing the idea of a diesel engine in a performance car with their new RS5 TDi concept car, the first time that a diesel engine has powered a high-performance RS model. Dubbed a “technology study” there is as yet no date as to when something like this is likely to make it into full production.

What about power?   At the heart of the RS5 TDI concept is a 3-litre twin-turbo V6 diesel engine with 240 kW (326 bhp) and 650 Nm of torque. However what is unusual about this concept is the use also of an electric-powered turbocharger, the purpose of this is to compensate for the turbo lag normally associated with diesels.  By removing this lag, Audi are essentially removing the “dieselness” from the car.

Audi RS5 TDi Concept on the track? On the track it is blisteringly fast and kept pace behind a RS6 with ease.  The electric compressor gives the car enormous power instantly when starting off. Audi reckon that the car sprints from rest to 60 in roughly four seconds and its certainly not a figure we can argue with. 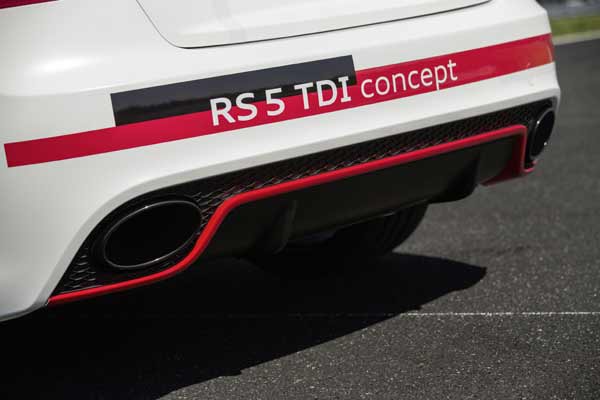 How thirsty? According to Audi the fuel economy is likely to be around  53.2 mpg.

What’s next?  A  diesel-powered performance car may not be in Audi showrooms just yet but the RS 5 TDI Concept proves that a diesel RS can’t be too far away.

For more information check out the Audi UK website  or the Facebook page or the video below.

6 things to know about the new BMW Concept M4 GTS