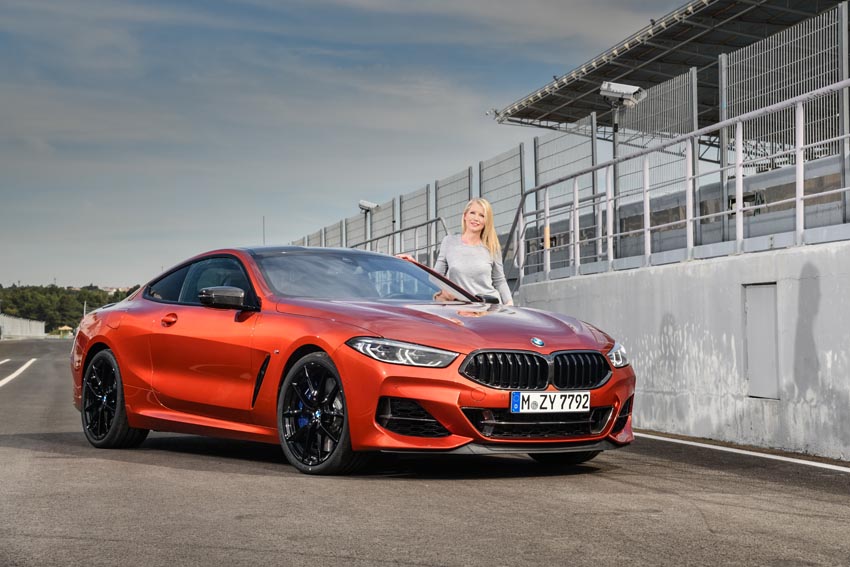 What is it? It’s been almost 20 years since the last BMW 8 Series; the two-door coupe traces its history to the Frankfurt Motor show in 1989 and was BMW’s technology showpiece of its time. Dubbed the ‘E31’, it was powered by 5.0-litre V-12 that produced 300 horsepower. Over its lifetime it sold just over 30,000 and more than two-thirds were fitted with the V12. Today the 8 Series, which ended production in 1999, is considered one of the boldest ‘Beamers’ ever produced and its pop-up lights are one of its most enduring features.

Is it a looker? On first sight, it is a real head-turner with a low slung design, 20-inch alloy wheels, slim, shallow LED headlights and a roofline flowing so elegantly there is no driveway or kerbside which would not be enhanced by its presence.

Who will it compete with? The number 8 has always been special to BMW – think Z8 and i8 – and its latest 8 Series incarnation promises luxury and performance enough to tempt buyers away from the Porsche 911, Bentley Continental GT, Lexus LC and Mercedes S Class Coupe

What about the interior? Inside, it is much like every other high-end coupe BMW makes: luxurious and understated. The BMW  Professional iDrive, the latest version of the manufacturer’s infotainment system, comes as standard and comprises a fully digital instrument cluster with a 12.3-inch display. The aim of the revised system is to simplify it and now most functions can be controlled by touching and swiping the smaller of the two screens – and overall it is more responsive and intuitive to use. 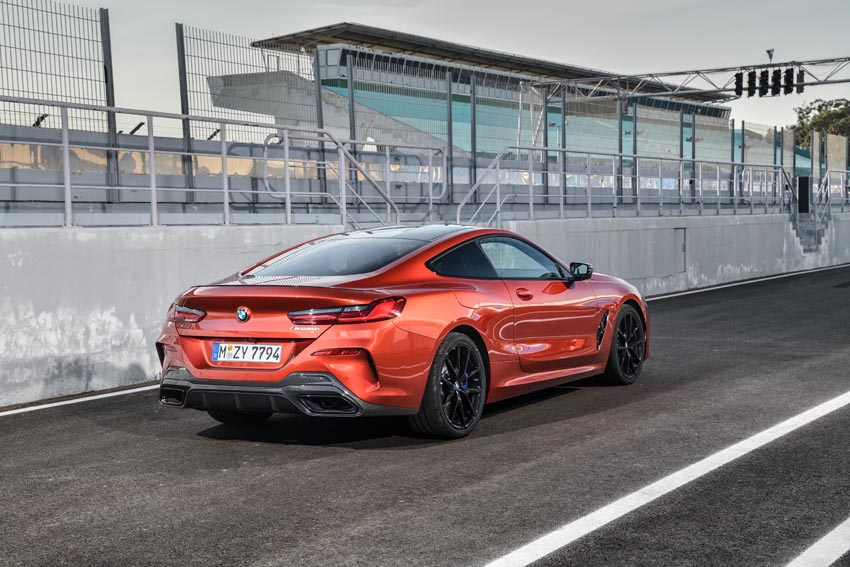 BMW Digital Key permits access to the car and engine start by smartphone.

Under the bonnet? Two models are on offer, one petrol and one diesel engine from launch. The 320hp 3.0-litre diesel 840d delivers an impressive  0-60 in 4.9sec, 46.3 mpg and emits C02 at a rate of 160g/km. The flagship M850i model is powered by a 4.4-litre twin-turbo V8 that produces 530hp and results in a 0-60 time of just 3.7 seconds. Both versions feature BMW’s xDrive four-wheel drive system.
The eight-speed automatic transmission comes with shift paddles on the steering wheel for manual gear selection, along with a number of drive modes including Eco, Comfort, Sport and Sports-plus.

And on the road? At 4.8 metres long and weighing in at 1905kg, the 8 Series would appear to be more grand tourer than a luxury sports car, but looks can be deceiving.

Press the start button and the V8 engine, with 750 Nm torque, explodes delightfully into life and its rumble will lift your spirits.

Behind the wheel, it’s breathtakingly powerful and shockingly fast. Off the motorway, flicked into Sport-plus mode, it handles with the agility of an Olympic athlete. BMW has even thrown in the odd crackle and pop to enhance the experience, but, trust me, the novelty wears thin very quickly.

The narrow, old roads of Lisbon and the surrounding area gave us plenty of opportunities to really test this 8; that said, whizzing around Portugal in 26-degree heat at the end of October is almost certainly guaranteed to produce positive feedback.

The bad news is that the sheer mass of the car is impossible to disguise and while numerous technological features within the car conspire to minimise the impact, you cannot deny physics, plus the steering feels a little lifeless.

What is it like to drive on a track? On the track, however, it is blisteringly loud and after just one lap at the old Portuguese Grand Prix circuit at Estoril, near Lisbon, it becomes apparent just how capable this car is.

The 4.18km-long track is relatively twisty but lap after lap, the car’s handling, power and suspension are truly impressive, yet staggeringly easy to handle. In fact, the faster you go, the happier it gets.

How Much? Arriving here next month, the flagship model will be priced from £100,045OTR for the petrol, while the diesel will start from £76,270. As expected you pay at the pumps for performance of this calibre, the M850i returning 28/3 mpg and 228g/km of CO2.

Why you will want one? The 8 costs a lot, yes, but is it worth it?  This is a sports car, a performance car, a car to truly enjoy driving. It sits in a niche of a niche in the luxury sports coupe segment, somewhere between Gran Coupe and full-blown sports car.

It also hints at the design direction of future BMWs and will be followed by a convertible, Gran Coupe and an M8, establishing the 8 Series nameplate for future generations.

The M850i is an insight into what BMW can offer in the coming years, so it seems the future is bright, for those with deep pockets anyway.

8 things to know about the BMW 5-Series