Ford is adding yet another MPV to its range, the Tourneo Courier but  will it be sold here?  After a preview in  Frankfurt we think it would be a pity if it wasn’t writes Geraldine Herbert

What is it? Ford have taken what is essentially a van and equipped it with some necessary luxury to turn into a very spacious family car. Designed with growing families in mind Ford’s new Tourneo Courier promises to be practical, safe and economical to run

First impressions of the new Tourneo Courier?  Despite its “boxy” appearance it’s actually quite appealing and looks like a more purposeful B-Max

What about the interior?   Inside it is all about space and practicality. 780 litres of luggage space is available which is more than twice the space in a Ford Focus and the boot is very usefully split into upper and lower compartments. Kids will love the large windows and this only adds to the feeling of space while the sliding doors make for easy access to the rear seats. The dash is clean and all very familiar Ford territory. 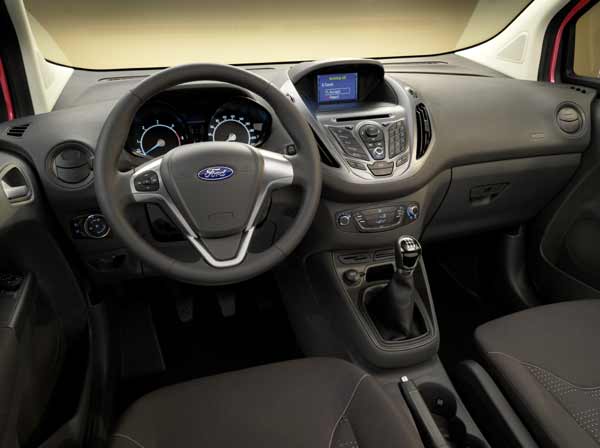 And behind the wheel? At the launch we had an opportunity to drive the 1.6-litre diesel and a 1-litre EcoBoost petrol

Ford Tourneo Courier in the city Despite the enormous cabin space, on the road the Courier feels a lot smaller and more compact that its dimensions would suggest. It is light and easy to manoeuvre and while the van-like large window and mirrors may be less appealing aesthetically they certainly make for great visibility.

Ford Tourneo Courier on the motorway; It is on the open road that you really feel the difference between both engines, the EcoBoost struggles at higher speeds while the diesel just has that extra oomph needed. Overall the diesel one makes more sense and is better suited to the Courier.

How Much? As it is not confirmed whether the Tourneo Courier will be launched in the UK there is as yet no indication of prices but we would expect it to be priced slightly lower than the B-Max

How Safe?  The new Courier comes equipped with all of the usual safety features designed to keep you and yours safely cocooned. In addition it promises first-in-segment safety aids such as a comprehensive standard restraint system including knee and curtain airbags, and advanced technologies such as Tyre Pressure Monitoring.

What about my options:  Two trims are likely to be offered on the Courier, an entry level and the premium spec Titanium.

For more information check out Ford.co.uk or the Ford UK facebook page