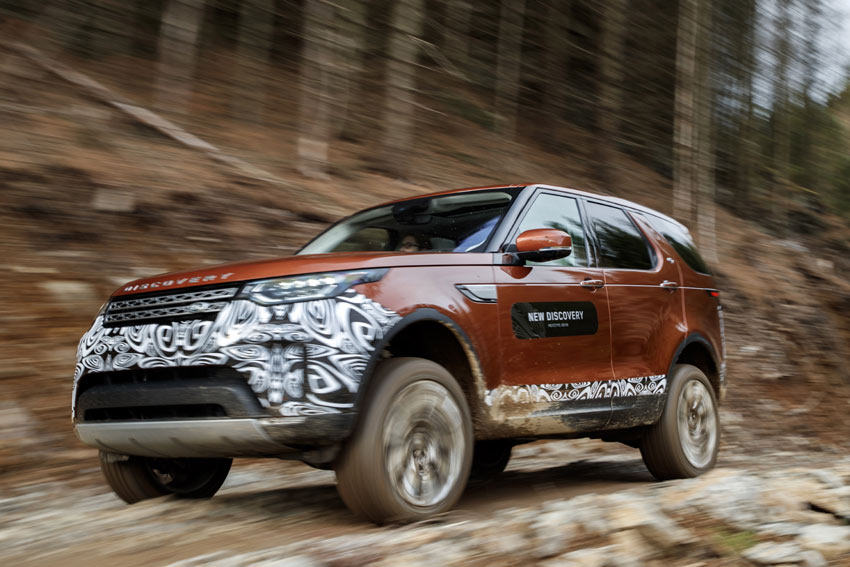 What is it? Deep in the Scottish highlands the tough terrain surrounding Blair Castle, a landscape of thick forests and rugged mountains that sprawl across 145,000 acres, is where the all-new Land Rover Discovery is being put through its paces. The cars being tested are not quite yet the version that will be sold here next February, but rather a “pre-production prototype” of only 150, built from the current production line, but not yet of saleable quality.

What is new? Originally conceived as a more luxurious Land Rover Defender, the last two incarnations have made the Land Rover Discovery more than a match for the Range Rover in terms of luxury and styling. The Discovery Model 3 in 2004 was the truly groundbreaking version with an evolutionary patented technology in the form of Terrain Response and Integrated Body-Frame, futuristic design and yet at its very core the legendary Land Rover DNA. The Discovery 4 was launched in 2009 and given a face-lift in 2014. Now for 2017, the fifth generation has been completely overhauled, shaving off 480kg and being moved even more upmarket.

And the styling? The squared-off boxy design of its predecessors has given way to a curvier and softer shape heavily influenced by the Range Rover and the smaller Discovery Sport. All three cars share the same Premium Lightweight Architecture (PLA) platform. While the styling of the new Discovery lacks some of the charm of the previous version, it is longer, more ergonomic and practical.

What about the interior?  Inside, it feels more substantial and resilient. The uncluttered cabin, new infotainment system and high-quality materials make this the most luxurious Discovery yet. Crucially, there is also enough space to carry seven adults and even with that many on board, there still is 258 litres of boot space. There is also plenty of space and storage throughout. Using the Discovery as a five-seater allows you a substantial 1,137 litres, but with all the passenger seats down, there’s a huge 2,406 litres available.

Under the bonnet? We had an opportunity to drive both the 3.0-litre TDV6 and 3.0-litre Si6 petrol. New to the range is the four-cylinder Ingenium diesel engine with 132kw and 180kW and CO2 figures from 159g/km.

The Land Rover Discovery off road?  Our test drive was strictly limited to off-roading and as our Discovery navigated with ease the slippery forest tracks, waded through water, descended along rutted mud-lined tracks at a steady speed and clambered precariously over rocks on a steep incline, it proved, even on a wet Scottish day, to be still as invincible as ever. It also feels much lighter and agile thanks to the aluminium architecture.

The ground clearance and wading depth have been increased significantly; ground clearance to 283 millimetres and wading depth to 900 millimetres. As with previous versions, the Discovery is equipped with Land Rover’s All Terrain Progress Control system – with a simple turn of a dial in the centre console you can summon a range of off-road configurations. A new feature is the All-Terrain Progress Control (ATPC) function that is essentially an off-road cruise control; all the driver has to do is steer.

How much? The new model is available to order now with deliveries commencing in the spring  priced from £43,495 on the road. In the UK, 600 ‘First Editions’ will be available from the start of sales priced at £68,295 on the road.

So first impressions? Part luxury family vehicle, part functional hauler, part off-road marvel, there is much demanded of this new car and even on this limited first drive, the new Discovery feels much closer to the Range Rover than the car it replaces. We will have to wait for on-road testing to give a definitive verdict about how it handles on regular roads but it certainly feels plusher, more comfortable and more refined. Off-roading prowess is only a component of a premium SUV and the new Discovery needs to be refined, car-like and economical on the road to be a match for rivals, but first impressions bode well.

In the video below we take the  New Discovery rock climbing