The Renault Twizy is a real head turner, but what’s it like to drive? Caroline Kidd finds out

What is it? Renault’s new compact electric vehicle aimed at urban dwellers. The tiny two-seater can be charged using a standard powerpoint in your home or office, or at any roadside 3 pin charging point. A full charge takes three and a half hours and provides a range of 60miles but in normal use owners can expect a range of around 80km depending on factors like driving style and outside temperature.

First impressions of the new Renault Twizy. It wouldn’t look out of place in the film WALL-E. The Twizy is an odd-looking machine from whatever angle you look at it and up close you soon realise that it is not really a car at all – more like a scooter with a roof. The semi-open design, curvy body and wheel-at-each-corner design combine to give a quirky look that will elicit a lot of smiles from pedestrians and other road-users.

What about the interior? The driver’s seat is comfortable and can be adjusted back and forth. There is plenty of room up front but the rear passenger does not fare so well and will find themselves with legs splayed uncomfortably in the tiny space behind the driver’s seat. The “cabin” is very basic and there are no car-like comforts (not even a sunvisor!). The driver’s display shows the battery level, range and an eco-score for each journey. There is limited storage – 2 small storage compartments on either side of the steering wheel and a larger 31 litre space underneath the rear seat which is awkward to access.

And on the road?
Renault Twizy and the city: With an overall length of 2.34m and width of 1.24m, combined with a tight turning circle, the Twizy is perfectly proportioned for parking and nipping around urban environments. The Twizy is very easy to drive and the automatic transmission makes it great around the city. While the electric motor only produces 17bhp, the Twizy is light and takes off quickly. There is no issue keeping pace with other road-users. The Twizy doesn’t fare quite so well over ramps and rough surfaces and there is a lot of intrusion from road and wind noise due to the open design of the vehicle.
Renault Twizy and the open road: We had limited opportunities to take the Twizy up to its  maximum speed. While the Twizy is legally allowed on motorways this is not the environment Renault designed it for and based on our short test drive, travelling at any great speed in the Twizy is exhilarating but requires a high tolerance level for discomfort.

How Much? Prices for the Twizy start at  £6,690. Battery rental is from £40 a month depending on customer mileage and contract term. 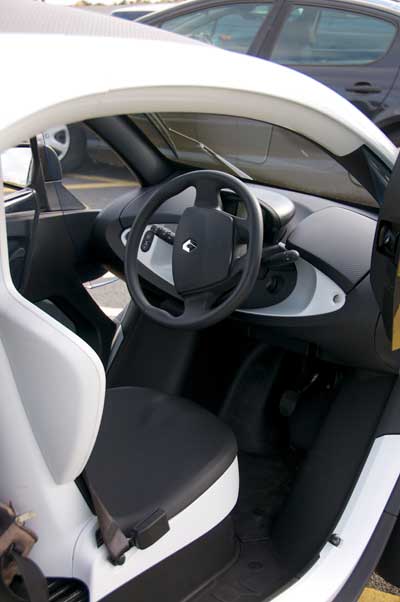 Colour-coordinated half-scissor doors will be available for £455

How Safe? The Twizy is classed as a quadricycle so will not be crash-tested by Euro NCAP.  At the front there is a deformable structure that provides protection in a collision, while the outboard wheels and lateral beams to either side of the chassis provide driver and passenger with side protection. The Twizy is fitted with a driver’s airbag and disc brakes  front and rear.

What about my options: To provide a little more shelter from the elements, plastic windows and scissor doors can be added to the Twizy.  Standard equipment on Twizy includes 13-inch wheels, two gloveboxes, one of which is lockable, 3 metre long charging cable, heated tinted windscreen, Z.E. onboard computer and dashboard with econometer and battery consumption display. Safety and security have also been paramount throughout the project, as is evident from the three-point seatbelt in the front with additional lateral restraint, three-point seatbelt in the rear, front airbag and immobiliser and steering lockColour comes with a choice of three bodywork base colours: black, grey or white, which can be combined with one of Urban Blue, Ivy Green or Flame Orange, for the roof and side panels.

For more information about the Twizy   check out  Renault.co.uk