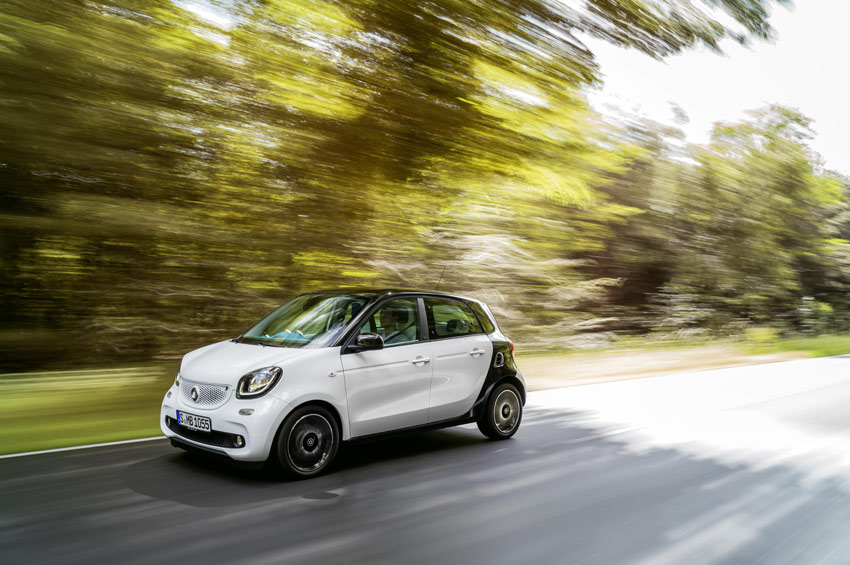 Ginny Weeks gets behind the wheel of the new smart forfour

What is it? The smart forfour is a compact four seater aimed at city dwellers who need a little more space. After the slow sales of the first smart forfour, launched back in 2004 and eventually axed from the brands range, smart has introduced a shiny new version, which it hopes will prove more popular.

First impressions of the smart forfour? This new-look smart has gone down the MINI styling route with exaggerated features, but it certainly is eye catching with its dual tone colour options and urban design influences. The honeycomb grill and chunky bonnet lend the car a ‘big car’ feel.

What about the interior? With its uncluttered dash and playful colours the smart interior is appealing to the eye. Despite some cheap plastics in parts the overall feel is stylish, well thought out and fun. Our car featured every available option including a rearview parking camera, LED head and tail lights and a touch screen infotainment and sat nav system which we’d highly recommend as it was one of the easiest we’ve used.

The front of the car has a great sense of space and light thanks to the engine being at the rear, but what lets the car down is the lack of headroom and leg space in the back. The 185 litre boot is a little on the small side, but thankfully the rear seats do fold flat if needed. 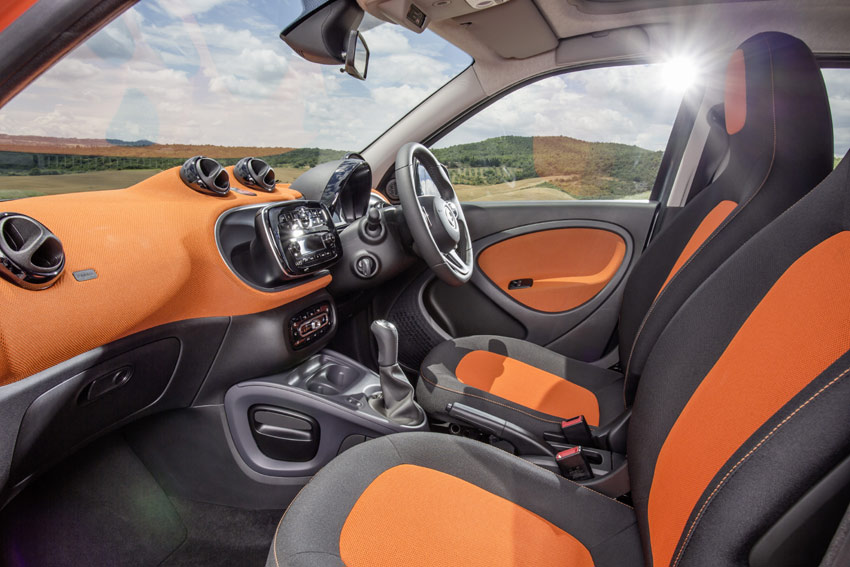 For the first time, smart is offering the JBL sound system, which produces an impressively full sound

Smart forfour on the road? The smart forfour is everything a little car should be; nimble, nippy and easy to park. The steering is a joy to use around town, aided by the car’s brilliant turning circle, which rivals that of a London black cab. However, at the same time this light steering lets the car down on the motorway as it gives an unconfident feel at high speeds. There is also a distinct lack of power above 50mph, putting it at a disadvantage against similar hatchbacks such as the VW up!.

Long journeys may not be the forfour’s strong point, but the car is cheap to run. Our 71hp model was impressively fuel efficient with hardly any movement on the petrol gage in seven days despite a driving distance of over 300 miles. With its low 97g/km CO2 emissions rating you won’t need to pay any vehicle tax either.

What about my options? There are three main equipment lines as well as plenty of colour and optional feature choices: the entry level Passion which comes with standard features plus styling updates; Prime which features a panoramic roof; and leather heated front seats and Proxy which includes the sports package and larger alloy wheels.

Home is where the Smart is