Girl Racers – the Daring, Dashing women who blazed a trail on the early motor racing circuits… 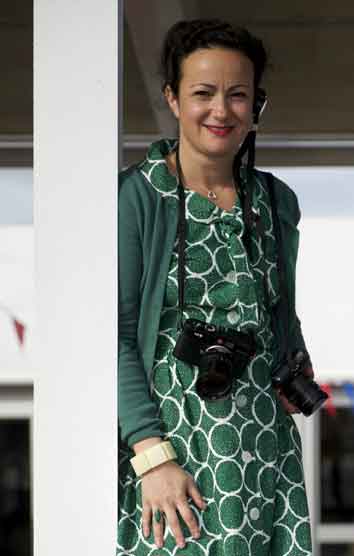 We catch up with Lara Platman, author of a new book entitled “Girl Racers” a celebration in words and photographs of an intrepid new breed of liberated women who lived for speed.

One of my first strong childhood memories was helping to sew on sequins to costumes, surrounded by Italian women working on fine ‘couture’ wedding dresses mixed with London fashion students working on theatrical costumes in my parents’ workshop up above their wedding dress and theatrical costume shop, everyone paying attention to the smallest detail with enormous patience and skill.

Although there were many memories I have before this, (such as screaming like crazy in Benidorm because I refused to wear the sandals my mother was insisting I wear and dragging around an almost life size toy dog around with me on a lead and watching other real life dogs sniff at it), I think this vision is something that has carried through to my adult life – the skill and time involved with making a bespoke item. Another distinct memory is of the house I used to live in as a child – a white almost ‘Bauhaus’ 1930s Suburban detached house, complete with Crittle windows and a curved side window that could look right down the hill.

My teenage years were spent by going up on the London Underground on my own to my parents shop behind Bond Street with an en-route stop off at Debenhams department store, to secure that I had every piece of Mary Quant make-up available on my face along with blue hair spray on my frizzy 1980’s hair. Often a shop assistant would call ahead to my parents to forewarn them of the creature that would appear before them – or they would send a sufficiently colourful fashion student to collect me. I would sometimes do my homework in a dressing room or their workshop. Have I told you about my parents ‘placing’ me in theatrical costumes on a Saturday when I was in single figures, to drum up trade – parade me up and down the high street? Yes I thought I had carefully misplaced that part of my memory for some reason.

It was about this time in my young teenage years, that I first saw a film about ‘The Bright Young Things’ called ‘Vile Bodies’ by Evelyn Waugh based on stories with Steven Tenant, Cecil Beaton, the Mitford sisters and lots of other high society ladies and gents all running around London in Super charged Bentleys, Aston Martin Lagonda’s and Bugatti’s looking for clues that Lord Beaverbrook had placed in his newspaper, to the treasure and upon finding it would all flurry back to one or other’s estate and party like there was not tomorrow. The First World War had affected people in different ways and for some lucky few parties and driving fast cars was a way of life. Some of those ‘Bright Young Things’ flew planes, raced cars and these are the characters that I have carried through with me to my adult life.

It is no wonder that I chose my profession to be contained with the creative industries with such a ‘charmed’ childhood. Obtaining a Fine Art degree majoring in photography, welding and sound engineering, there was indeed to be a future of an eclectic mix of delights ahead of me.

First working as a dance and theatre photographer, loving the thrill of being able to capture a moment in time that was, in effect something from nothing, I slowly began to take portraits where the subject would be still and within their working environment. This lead me onto my first book ‘Art Workers Guild 125 Years’ and then my second, ‘Harris Tweed from land to street’ and my third of which I am currently working on, ‘Distilleries a portrait’.

So what of the motor racing interest and in particular what about the women?

Well about 16 years ago when I was a photographer for Country Life magazine (and a photographic archivist for them too) I was sent to Goodwood Revival to document the weekend’s events. A superb collision of theatre and motor racing in the grounds of one of Britain’s oldest landed family, (Charles, 7th Duke of Richmond, Lennox, Gordon and Aubigny, 1845-1928)

I mentioned I majored in welding during my fine art degree earlier – well that was purely because I had a Morris Minor, which at some point (almost all of the time) required patching up. I was also asked to change my tyres when I was learning to drive and around about the same time I took a car mechanics course with my father’s philosophy of ‘I am not picking you up at some god forsaken time of the morning because you have broken down in that thing’. (I actually remember driving to Cambridge from our family home in Essex, the same day as passing my driving test – how far could I drive in that one day?) Therefore my cement for historic motorcars was planted in my soul. Joined with my indigenous theatrical habitat, Goodwood Revival was some sort of mecca. (I have missed only one revival since its launch -because of my darling friend Sarah’s wedding – and I understood it rained almost incessantly all weekend).

I discovered some amazing women at Goodwood Revival, driving really old cars, far older than my Morris Minor. In fact my Morris Minor was positively new compared to those racing at Revival of course. And I think it is here where my first understanding of the past becoming a present reality.

Each year at Revival I would photograph (amongst all the cars and drivers) more and more women and get invited to more motor racing events. Slowly this was becoming my theatre albeit outdoors. I went to a Spa 6 hours historical race meeting, coming away with some of my signature photographs and an energy of thought that was simply “what car can I drive this race in and how long will this take me to get here?”

I think one my favourite moments of the past few years has to be when I was photographing at the Spa 24 hour modern endurance race where, the teams are seem to be so confident that they can get their car to finish the race, even with a two hour garage fix up, they have a desire to keep the car on the circuit. To me it was just like being back in the theatre and the workshops above my parent’s shop, with everyone working towards one thing: ‘the show must go on’.  An empty stage, the sound and lighting crew arrive then, the props and costumes and then the actors/ dancers turn up and expect it all to be ready so that they can perform. The garage the wheels, the petrol crew, the mechanics, the stewards, marshalls and the eventually the drivers.

One special motor racing event I absolutely adore is the Historic Grand Prix de Monaco, a bi-yearly race meeting. On my first visit I found Julia de Baldanza racing her Bugatti and a Maserati and, doing really well against cars much newer (probably by a whole ten years) than hers. I met other ‘Pre-war’ racing car drivers who told me enough to get me hooked on the subject. I am privileged as a press photographer to stand just the other side of the metal safety railings when the races are happening. So utterly close, so close it makes your hairs stand on edge when you hear the Maserati’s, BRM’s, ERA’s whizz and I mean completely whizz passed you at La Rascasse corner.

It is here that I learnt of who I consider to be one of my favourite female lady racing drivers from history. A woman who had driven from John e Groats to Monte – Mrs Victor Bruce – who, at the age of 15 had got caught speeding on her brothers motorbike then went on to drive the Monte Carlo Rally in 1927, drove for 70 hours nonstop, came 6th overall and came 1st in the coup de dames, then about 6 weeks later drove 200 miles north of the Arctic circle, and to cut her story short, then went off and bought a fold up plane and flew solo round the world – amongst her many other achievements!  This I must tell you is before Amy Johnson or Amelia Earhart took to our newspapers, so the Honourable Mrs Victor Mildred Bruce for me, is the main inspiration for this book along with women such as Julia de Baldanza, who I had decided was born way after the era she ought to have been born and other racing women; Camille du Ghast and Helle Nice – the Bugatti Queen…. And hearing about the ATA women some of which flew planes during the day and danced in the café de Paris by night.

Reding that brilliant quote by Dorothy Levitt, made in 1912 “one must always carry a mirror in the car. The mirror should be fairly large and one with a stick – not only to put ones lipstick on  – but it is jolly useful to see what is behind you” Ms Levitt has a hound of quotes all of which I love…. I think the wing mirror came onto the cars in 1914.

I became fascinated by all of these women in different ways, who simple didn’t know they couldn’t – who all knew they could! This gap, this very little gap of time when the men had not come back from the 1st world war and the woman had gotten used to working the machinery and heavy labouring – just continued to drive, drive fast cars and fly planes, it was simply part of life.

Slowly and surely my love for theatre has turned into an outdoor theatre of sorts that of motor racing and in particular these sensational women.

I went off and took my motor racing license exam last summer and this spring I will be racing a 1971 MG Midget, but that’s another story and it will be part of this book, something my car mechanics course is going to be very handy for…