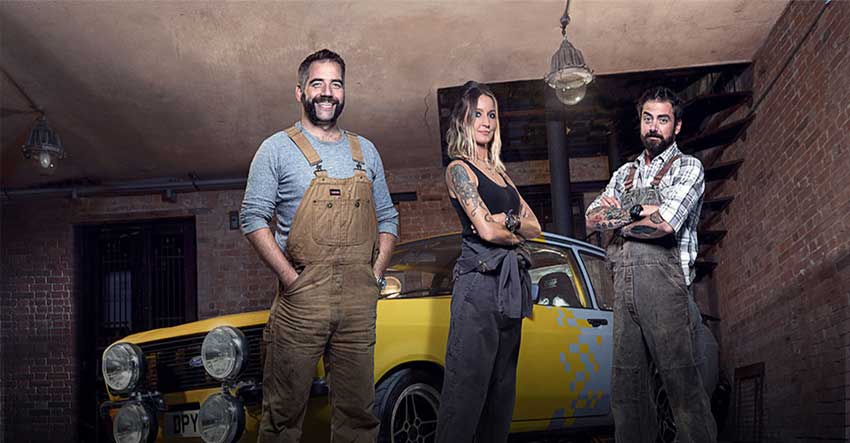 Three eccentric mechanics, Jimmy de Ville, Ant Partridge and Helen Stanley, are on a mission to bring the once Great British engineering company, Goblin, back to life

A new TV series has begun on Quest that aims to push the boundaries of what is possible with engineering and classic machinery. Goblin Works Garage has been re-imagined by well known extreme adventurer and petrol head Jimmy de Ville as he aims to bring back the name that was featured over 30 years ago by a British engineering company. Jimmy is joined by fellow dungaree wearing co hosts Ant Partridge who is known for custom motorcycles and Helen Stanley a custom car designer and builder.

The first episode featured an iconic mk2 Ford Escort found in South Africa and which housed a non standard Mazda engine that was swiftly removed and discarded. The Escort was put through its paces in a local quarry which ended with Helen stacking it into a boulder after Ant had urinated on the windscreen due to lack of washer water. So you can get the idea of what this madcap tv show may contain in the next few episodes. The Escort was stripped of its crash damaged panels and Helen designed a rally inspired drawing taking the mk2 back to its roots but that also included a modern twist by adding a 2.0-litre modern Zetec Ford engine. The end result was a vibrant yellow and grey classic car rebuilt with modern reliability.

With all the car shows popping up on our screens its nice to see a British show, using local businesses and engineering. Speaking with Helen I asked her how she became such a massive petrol head.

“I love style and design and I‘m obsessed with classic cars so I’ve pretty much combined those two things. My Dad is a big petrol head and I’ve loved cars as long as I can remember but it wasn’t until 2013/2014 that I co-founded Skull & Pistons Garage and took it from a hobby to a day job.”

I was also interested to know what Helen’s favourite part of the Escort build was;

“My favourite part of the first show was grafting on that MK2 Escort to put right my little smashing session. Because I’m a huge Ford fan I couldn’t sleep at night until that wonderful little car was brought back to a good standard. I also love the paint so seeing the painted shell come back from Greg’s was epic. It’s a controversial paint scheme but as team we loved it and it’s really different.

The show also featured a one off bespoke Norton cafe racer motorcycle designed and built by Ant. The show in the coming weeks will feature some blasts from the past including a Series 2a Landrover, Ford Capri and a Datsun 280z. The programme won’t appeal to the purists amongst petrol head society but if you’re after individuality, craziness and bespoke modding then Goblin Works Garage is certainly worth a look.

Goblin Works Garage is on at 9pm on Quest TV

Opening day at the Classic and Sports Car Show