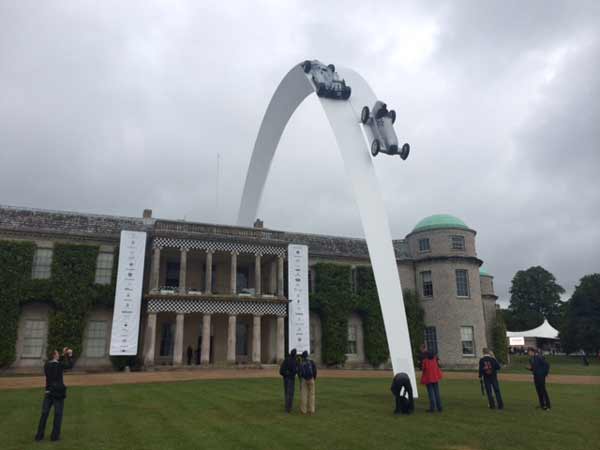 Goodwood Festival of Speed is the showcase motoring event in the UK, and this year it ran from 26th to the 29th of June in the stunning grounds of Lord March’s sprawling West Sussex estate writes Hannah Gordon

Each year crowds flock in from all over the world to get close to a huge array of cars and motorbikes. The opening day involves a Moving Motor Show that allows manufacturers to showcase the many new models they hope will catch prospective buyers eye.

The famous Goodwood FOS sculpture was this year provided by Mercedes-Benz to celebrate its 120 years in Motorsport, the masterpiece stretched over the stately home and included a replica of the 1934 W 25 Silver Arrow and a 2013 Lewis Hamilton F1 car. The Goodwood FOS is a great opportunity to get close to some of the most exclusive cars ever built, the great attraction of this motor show is that you could be a millionaire or have saved up for your ticket from your last pay packet; everyone who visits has one commonality; they all have a passion for cars that stretches across all classes of society.

This years Motor show included the congregation of the Mclaren P1, Porsche 918 and the Ferrari La Ferrari, these hypercars are an insight into the next generation of part hybrid and are the current wall adorning poster must haves for all teenagers. The Michelin Supercar paddock proved popular as it showcased Ferraris, Mclarens, Porsche, Mercedes and the impressive Koenigsegg One:1.

The 2014 Festival was all about the three M’s, Mazda celebrated 25 years of the Mazda MX5 with a stand comprising of the models through the years. Maserati was also celebrating its centenary with a exhibition showing off some of its finest italian masterpieces as well as the Maserati Alfieri concept. And Mercedes celebrating its 120 years in Motorsport as well as sponsoring the event.

Following on from the enthralling Le Mans 24 hour event earlier this month Audi, Toyota and Porsche all showed off there P1 creations, and were ran up the famous hill climb.

The allure of this show has to be the monumental array of classic motor cars, in Cathedral paddock you are greeted by the sound of some very special cars, the pit crews are working hard on these very old and rare racing vehicles, not a computer in sight and with the smell of these engines as they roar up provides an instant smile inducing reaction. This atmosphere is addictive, to be so close to these masterpieces really does put the hairs on the back of your neck up.

Theres plenty of British manufacturing on show to, its an exciting time for the car and motorsport industry in this country. Jaguar and its Special Operation department have been hard at work producing the Project 7 that shows just what bespoke intentions Jaguar have. McLaren have also been busy unveiling the McLaren 650S GT3 which will compete in the 2015 GT3 competition. Land Rover provided a concept Discovery to gauge the thought of the crowd, and the production vehicle looks sure to strike a very close resemblance to the concept on show.

The electronic and Hybrid motor vehicle is always a huge talking point in current manufacturer offerings. Every stand included a creation, with BMW’s I8 proving a real crowd pleaser.

Following on from the huge success of Gran Turismo and the digital explosion there was a couple of unveilings of concepts inspired by the video game, these included the Nissan’s Concept 2020 Vision Grand Turismo and the Aston Martin DP100.

Its not just cars and motorbikes on show, with an aviation section, helicopter rides and various displays including the acrobatic Red Arrows and the Vulcan bomber there is plenty of action above your head.

Goodwood FOS is well known for the hill climb event, a nerve racking drive up the hill just millimetres from the solid walls and with only straw bales protecting the crowd and driver. Its a chance for spectators to witness some of the greatest drivers piloting the worlds rarest race winning cars. its certainly a sight to behold, one minute you see a La Ferrari owned and driven by Jay Kay from Jamiroquai hurtling up the hill closely followed by the monster six wheel Mercedes G63 Brabus.

With all the best cars attending the show its only fitting that the worlds best drivers are there to drive them, this year didn’t disappoint with Lewis Hamilton, Jensen Button, Damon Hill, Sebastien Loeb, Mark Webber and John Surtees among the many high profile legends. Its a great chance for people to see there idols up close and to admire the talent on show. Its refreshing to be allowed so close to both the cars and drivers in an equally stunning location. There is no other motorsport show like this, where the average Joe can get so close and personal with cars they can only ever dream of being next to, the interaction and passion is so evident to see on everyones faces, the noise and smell arouse memories of past events and the eagerness of owners to interact about their pride possession results in an addictive concoction that keeps the crowds returning each year.