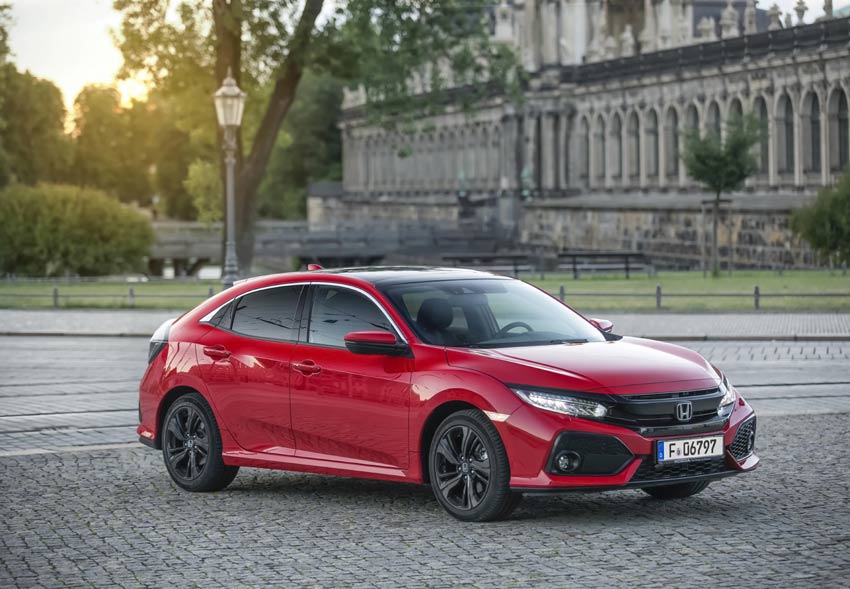 What is it? Honda have been busy producing a better Civic, one that will appeal to a larger market both in design and drivability.

Who is it aimed at? The styling of the new Civic surely points to a car aimed at the younger market with more aggressive exterior. Improvements such as interior space would also help it to appeal to small families.

Styling? Love it or hate it the Honda Civic styling is a little OTT! There are an abundance of plastic grill panels which can seem cheap but not one part of the bodywork is flat, there are creases and scoops wherever you look and it all just seems rather fussy. But the styling certainly gets a few looks and as I went out every morning and looked at it the unconventional look actually started to grow on me. But gone are the hidden rear door handles which I would have liked to have seen kept from the previous Honda Civic.

Under the bonnet? The test car had the 1.5-litre turbo petrol that makes an impressive 180 bhp and seems plenty quick enough whilst being quiet on acceleration. There is also a 1.0-litre 3-cylinder turbo petrol that will appeal to the majority but the 1.5 definitely shouldn’t be overlooked as its quick and its sporty nature fits perfectly with the sporty looks. There is also a choice of gearboxes between the superb 6-speed manual which would be my first choice and the 7-speed automatic CVT gearbox. 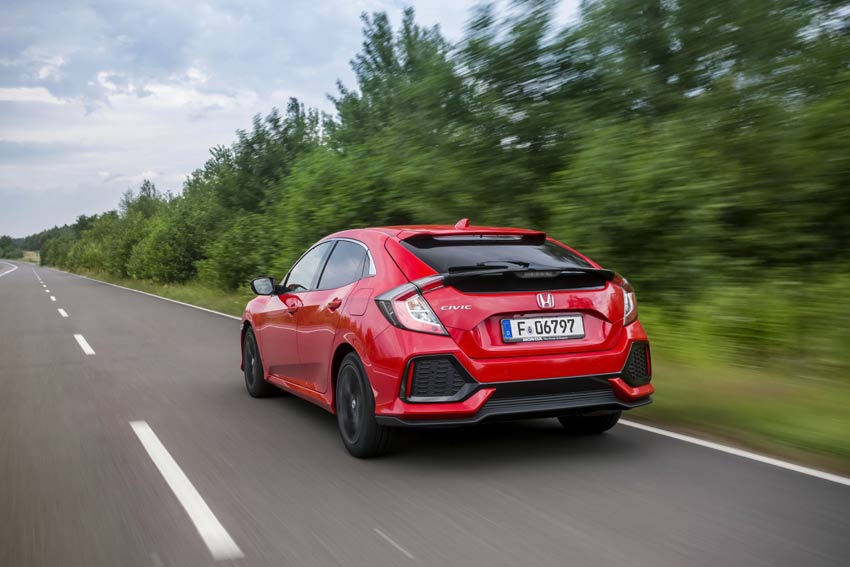 What about inside? The interior feels spacious and well put together, typically the cabin is a bit dull and dark but it feels good quality and should stand up to any heavy handed-ness. The touch screen infotainment system is easy to use and features DAB and Bluetooth as standard. The new Civic is 20mm lower and sitting in the drivers seat you do feel well encapsulated in the cabin, the driving position is good with plenty of adjustments and the all round visibility isn’t bad, but the split rear screen does remain.

The boot has a decent capacity of 478 litres which easily beats the Ford Focus and Vauxhall Astra, and the boot has an innovative parcel shelf design that saves space.

On the road? This 10th generation Honda Civic is lower, wider and longer which aids the car in every way, it also has a new suspension set up and a lighter, stiffer chassis. On the road the suspension soaks up many a pothole and the steering is light but does lack feedback when pushed along. The CVT gearbox is perfect in towns but can be slow to react, the manual box is a lot better and provides short and decisive changes. The Sport Plus and Prestige range get an Adaptive Damper system that can be made stiffer at a touch of a button.

What about safety? Honda have included plenty of standard safety features in the new Civic such as automatic emergency braking, lane departure warning, lane keep assist, adaptive cruise control, traffic sign recognition and intelligent speed assist. However, blind spot-monitoring comes as standard on EX, Sport Plus and Prestige models. The Civic only managed to get a Euro NCap score of 4 stars unlike most of its rivals that scored 5 stars.

What are my options? In Prestige trim the standard list is comprehensive but you will still need to fork out £525 for a metallic paint job. With 6 trim levels there are plenty of options to choose from, the SR would be the pick of the bunch giving you plenty of standard equipment such as parking camera, dual zone climate control and automatic wipers without having the expensive panoramic roof and adaptive suspension options found on the higher specs.

Will it break the bank? Figures for the 1.5-litre turbo petrol aren’t as good on paper as the 1.0-litre but you should still 48.7 mpg with the manual and 46.3 with the automatic. Emissions show 133 CO2 g/km for manual and 139 g/km for the automatic, compare these figures with the 1.0-litre which has a combined figure of 60.1 mpg and 106 g/km of CO2. As yet there is no diesel engine available until the end of 2017, but the punchy petrol turbo engines should suit most people.

So the verdict? The new 10th generation Honda Civic is better in every way than its predecessor with a more enjoyable driving experience and improved interior space. The petrol engines give decent performance and economy whilst being refined and the interior is well set out. The rear ‘magic seats’ have disappeared which is a huge shame and the exterior styling certainly splits opinion. With the large range of trim options it will be easy to find a combination that suits both the heart and bank balance.

If a diesel is needed then wait until the end of 2017 when a 1.6 diesel engine should be added to the line up and if you fancy something a lot quicker than the Civic Type R is already available.

Why you will buy one? Economical, Spacious, Refined

Why you won’t? Styling, Not as practical as before

For more information check out Honda.co.uk or the Honda UK Facebook page