How I crossed the world’s largest lake…by car 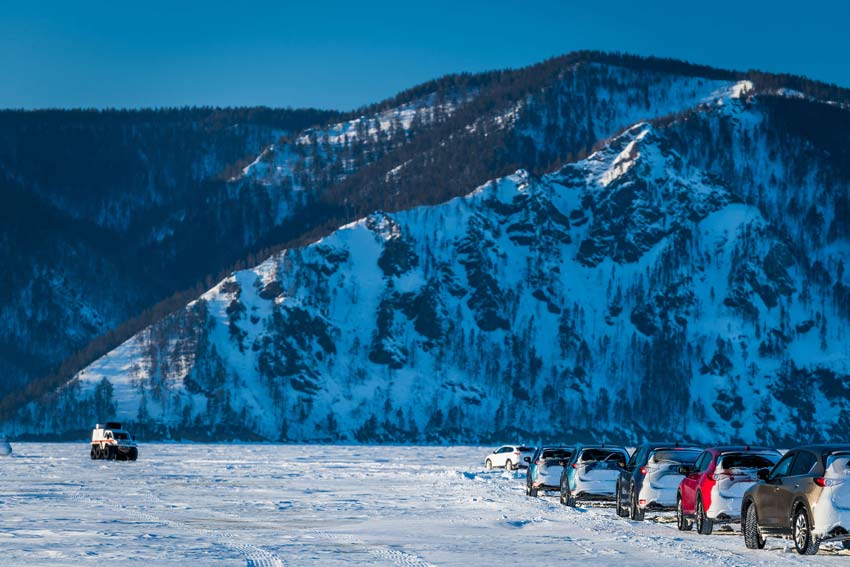 From Irkutsk we drive to Listvyanka, a small town on the shores of Lake Baikal. The 60 kilometre road runs through a white forest frozen under thick snow and was laid in just two months in preparation for what should have been a landmark state visit to Russia by the US President Dwight D Eisenhower in 1960. Constructed at the height of the Cold War, the ‘Eisenhower Road’ as it became known is our first introduction to Siberia and, like the American president, our destination is Lake Baikal – the world’s oldest, deepest and biggest lake, famed for its unique and complex ecosystem.

The construction of the road proved premature and Eisenhower never made it to Lake Baikal; just before the planned visit the Russians shot a spy plane down and captured the American pilot Gary Powers and the trip was abandoned. Thanks to the renowned visitor who never came, Listvyanka became Lake Baikal’s most popular tourist destination and the road remains today. 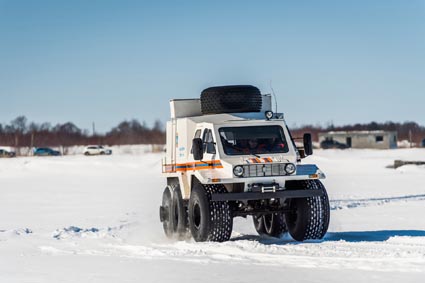 The six-wheel vehicle manned by Emercom

On reaching Listvyanka the plan is to embark on a rare ice-driving excursion and drive an AWD Mazda CX-5 powered by a 2.5-litre petrol engine and fitted with studded tyres across a 70km stretch over a frozen Lake Baikal. From there we will head east through the frozen Siberian forest before finishing in Ulan-Ude.

Over the winter, consistently cold temperatures freeze the surface of Lake Baikal to a depth of a metre or so. However, driving on ice is not without its risks – every few years this part of Siberia registers a major earthquake. Despite the stunningly beautiful surroundings, the harsh realities of the risks involved require expert guidance.

To ease our concerns about falling through the ice, we are given some clear instructions from our Russian guide Alex Simakin. First and most important is to drive slowly; the faster you drive, the more stress the ice is under, so speed has to be controlled and the brakes used sparingly. A convoy of 12 cars is to make the journey, so a distance of 50 metres must be maintained between each. As a last warning we are reminded not to wear our seatbelts, if we do break through the ice we’ll have two minutes before the car sinks, for the same reason, it’s also a good idea to make sure doors and windows are unlocked. It seems the fact that I can’t swim matters little when dealing with the deepest lake on Earth.

A six-wheel vehicle manned by Emercom – the National Russian Safety Team – leads our convoy but it is not long before the difficulties of driving on ice become apparent. Fractured white with cracks, the texture of the ice is constantly changing and frozen ripples break through the ruffled surface. 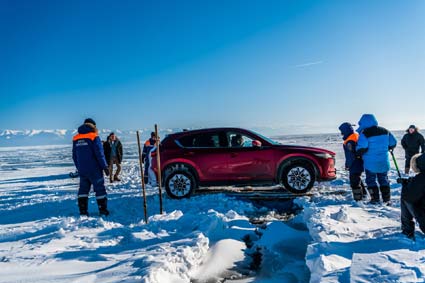 The light wind is not helping conditions either as it blows enough snow around to slow us down and reduce visibility. Melting sheets of ice are a constant concern and we cautiously proceed around slabs and shards of threatening ice. This edgy adventure takes a new twist; all progress is halted as we face a wide stretch of open water where the ice has completely cracked. The solution is provided by the safety team – the Russian crew build a makeshift wooden ramp across it with solid chunks of ice and random bits of wood. I try not to dwell too much on the laws of physics as I drive nervously to the other side.

Passing the halfway mark, we discover there are more immediate risks than going into the water. Successive cars to the front of the convoy are getting stuck in deep snow and the second part of the journey proves painstakingly slow as the entire group has to wait for each car to be towed from the snow. To get through requires speed but it is very easy to misjudge the depth, lose control and seconds later find yourself stuck.

The key is understanding the balance of the car to guide the CX-5 across. Thankfully the help of the two men in the tow truck is never called upon and the remainder of the crossing is more of the same – we slow to a crawl due to deep snow and menacing ice blocks.

And finally we emerge on land, the estimated four-hour crossing has taken close to eight hours but as we depart the ice for the last time I am reminded of the words of playwright Anton Chekhov in a letter he wrote to his mother after a visit to the lake in 1890: “It sent a shiver all over me . . . I shall never forget it as long as I live.”

A world first route crossing of Lake Baikal in a Mazda CX-5 has been achieved but there was still a three-hour journey ahead of us. The snow-covered road to Ulan-Ude – capital of Buriana – is one of Russia’s most dangerous and runs alongside the Trans-Siberian railway line that links Moscow to Vladivostok.

After 12 tense hours we arrive at Ulan-Ude just as the sun is going down and in the shadow of the largest head sculpture in the world, a 7.7 metre high bronze of Lenin’s head.

The harsh conditions endured by this urban crossover may never again be encountered but it’s reassuring to know just how unstoppable and capable it is.

And amid the thrill and terror of driving on ice we discover crossing a frozen lake demands, endurance, patience, faith, and a Mazda CX-5.