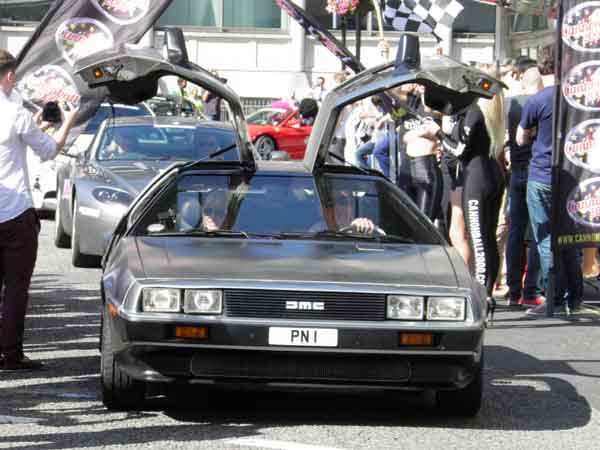 The De Lorean in the Cannonball 2000

The long road to cult success is stranger than fiction, the week Caroline Kidd looks at some memorable Cult Cars

In 1933, Adolf Hitler asked Dr Ferdinand Porsche to make a volkswagen, a “people’s car”. Porsche’s answer to this was the car we know today as the Volkswagen Beetle. With more than 21 million Beetles built between 1939 and 2003, in the longest production run of any one car design, the Beetle is one of the motoring industry’s greatest success stories.

How extraordinary it was that a car born in Nazi Germany would go on to become an icon of hippy culture in the 1960s. What was so special about the air-cooled Beetle with the engine in the back not the front that made it a bestseller and gained it such a dedicated following of fans?

There are cars; and then there are cult cars. Just like cult brands like IKEA, Harley-Davidson and Apple, cult cars have a dedicated legion of fans and name recognition that transcends the consumer world.

The Volkswagen Beetle is possibly the ultimate cult car. Small, reliable, affordable and with a unique curved body it was like no other when it began to reach the rest of the world after the end of World War II. More importantly, it had a unique character of its own and a personality that sold it to millions. Now there are owners clubs and websites popping up all over the world playing homage to the car. It’s no surprise that Volkswagen have reincarnated the Beetle with a cool new body to capture some of the magic of the original and sell the car to a whole new generation of car buyers.

Charm and charisma are crucial qualities for the cult car. The Mini, like the Beetle, was another 1960s icon with a strong design identity and bucket loads of character. When it was launched in 1959 it was fresh and different, with a space saving front wheel drive layout which would in turn influence a generation of carmakers.

Cementing its cult car status, the Mini was the only car for the job in the 1969 bank heist flick The Italian Job. The use of the tiny Minis in the film to zip around the streets of Turin was the perfect way to capture the spirit of the Mini.

A cult car does not need a large following; just a following. And a starring role in a hit film is a plus too. Fewer than 10,000 DeLorean DMC-12s were made and some of the earlier cars were very poorly put together. But part of the DeLorean’s enduring appeal is the starring role the car played as the time machine in the 1985 film Back to the Future. With its avant-garde looks that scream Eighties excess, and the romantic back story of John DeLorean’s ambition to build his own supercar, the DeLorean is an Eighties icon with its own dedicated legion of fans.

If you can’t star in a cult film, a motorsport pedigree can also be a passport to cult car status. The Subaru Impreza would just be another dull saloon had it not been for the car’s stellar success in motorsport. Now it’s a cult car and you can see traces of this cult on forecourts and in supermarket car parks on a Saturday night, or at grassroots rally events. You’re bound to find a Scooby parked up there in all its world rally blue and gold alloys glory. Sales of road-going super-fast versions of the Impreza, which married world rally style performance, grip and handling with the practicality of a saloon, exploded in the 1990s when the car was proving its prowess on the world rallying stage.

Cult cars have a unique blend of pedigree, history, individuality and a place in popular culture. But like a successful reality show contestant they have something else. You could call it the x factor, that special something that separates them from other similarly gifted contenders.

The Mini, Beetle, Impreza and DeLorean are just a drop in the ocean when it comes to cars that have developed a religious like following over the years. Everyone has an opinion on which cars have made that leap to cult car status but is it possible to spot potential cult status?

Like the Mini or Beetle, a cult car does not need to be an exotic or glamourous machine. This is good news for the Toyota Prius. As the world’s first hybrid car, the Prius has a special quality about it. The car already has something of a cult following in Hollywood where a host of stars like Cameron Diaz and Leonardo DiCaprio only too happy to be snapped in theirs.

If oddball styling is all you need to become a cult car classic then the Chrysler PT Cruiser with its 1950s hot rod styling, the frog-eyed Nissan Juke or even the ahead of its time Audi A2 could be in luck. Appreciation sites have already popped up on the Internet for these cars.

There are a whole host of hot hatches and performance cars out there like the DeLorean or Impreza but what sets one apart from the next? The absolutely bonkers 2001 Renault Clio V6 could be enough of an oddity to ensure cult car status in years to come. The incongruity of a supermini with a ferocious looking widened bodyshell and a 227bhp 3.0-litre V6 nestled where the rear seats should be makes it enough of an oddity to generate cult car status amongst a small following of equally bonkers petrolheads.

If all you need is a TV or film appearance to obtain entry to the cult car club then things are looking promising for the KIA Cee’d which features in Top Gear in the “Star in a Reasonably Priced Car” segment. If any more proof was needed that KIA have raised their game and undergone a massive image overhaul over the last few years, cult car status for the Cee’d would be it.