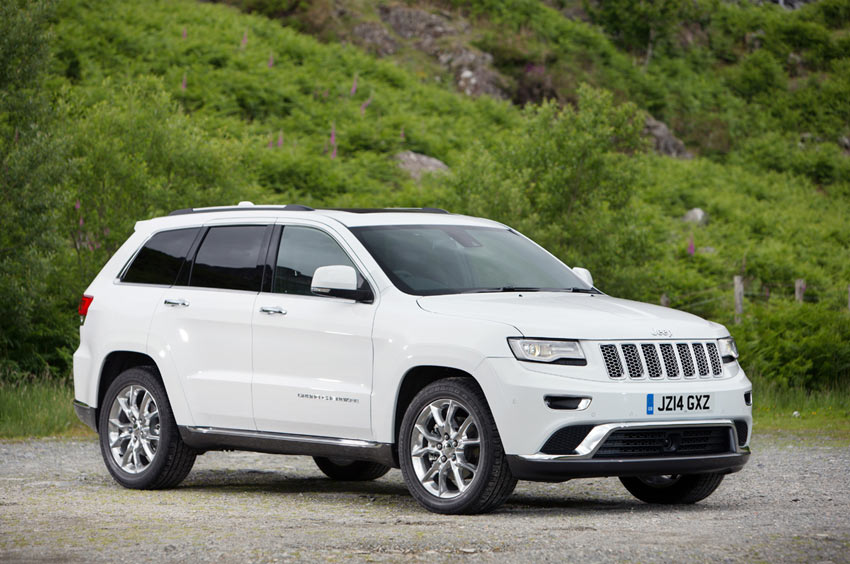 What is it? This is the largest vehicle in Jeeps range and the long running Cherokee name has been synonymous with the brand since 1993. The revised fourth generation model released in 2012 locks horns with the more prestige and expensive Land Rover Discovery, BMW X5 and VW Touareg.

Who is it aimed at? The Jeep Grand Cherokee is a huge vehicle and space is an obvious draw to consumers, the off-road ability that has given Jeep a suitable reputation in this field lends itself to the higher spec models which have adjustable suspension and better 4×4 qualities. The Cherokee is a superb car for families, general off roading or towing.

Styling ? For me the Jeep Grand Cherokee is the best looking 4×4 on the market at the moment. The styling has been greatly improved by the welcomed addition of smaller Bi-xenon headlights to the front which sit either side of the well know Jeep grille. There are also LED lights at the rear and chrome detailing around the fog lights, windows and door handles. The Cherokee is a bulky looking vehicle and has a stance that commands a bit of respect on the road.

Under the bonnet? For such a large vehicle a suitably large engine is needed and this comes in the form of a 3.0 V6 diesel, there are petrol options available but the majority of sales will be for the diesel. The engine feels refined and has enough poke to get this monster to 62mph in 8.2 seconds. The V6 hum on tick over is always a great sound and under heavy load the engine remains fairly quiet. A recent addition has been the 8 speed automatic, the gear change is smooth and progress is made without any trouble. Within the diesel range there is a choice of 188bhp or 247bhp, I would definitely recommend the higher output.

What about inside? This for me is what Jeep let themselves down on, for a car that retails well over £40k the interior feel and finish is too cheap. The buttons are large and plastic detailing is rife, the champagne colour inserts feel dated and its a shame for a car that looks so good on the outside. But having said that there is plenty of technology inside thanks to its 8.4 inch infotainment screen, the Overland model comes with heated front and rear seats while the seating position is excellent. If you like your music then the Jeep has 9 amplified speakers and a subwoofer as standard.

On the road? The problem with previous Jeeps has been the on-the-road drivability, with the new Grand Cherokee the chassis has been improved thanks to a certain German car manufacturers help. With a stiffer chassis the suspension can work better and the whole feel is more composed and refined for the driver. The large 20” inch wheels did make driving less comfortable but do look better than smaller wheels, and motorway driving is smooth and comfortable. The engine and gearbox never seem troubled and although there is some body roll it isn’t surprising when you consider size and weight.

Safety? Automatically when driving the Grand Cherokee you feel safe just due to its shear size and road presence. There are plenty of airbags around the vehicle, Advanced Brake Assist, Hill Start Assist and Blind Spot Monitoring System.

What about Options? The Overland range is one of the top specs for the Grand Cherokee and the standard list is already very comprehensive. Options available on top include Metallic paint at £720, Seat mounted rear DVD/Blue-ray system £1425 and an Advanced Safety Group (Adaptive Cruise Control and Blind Spot Monitoring) at £2400.

Will it break the bank? With a 3.0 V6 powertrain and 2.3 tonne weight the Jeep Grand Cherokee is never going to be very economical, the new 8 speed automatic transmission definitely helps though. With a combined mpg of 37.7 its not too bad, expect this to lower if off-roading though. The Grand Cherokee emits 198 g/km of CO2 which puts it in band J and an annual tax fee of £265.

So the Verdict? Like all Jeeps the Grand Cherokee has a lot to live up to regarding its heritage. Its predecessor was easily forgettable and possibly ranked as one of the worst 4×4’s on the market but the new Cherokee is in a different league. The engine, transmission and ride quality are bang up to date and make this a very drivable vehicle. The styling is distinctive and pleasing to the eye while its off road capabilities are still good. The price reflects how much technology has gone into the Grand Cherokee and it is still cheaper than most of its rivals. The only drawbacks are the dreary interior and fuel economy, which isn’t as good as some of its competitors. Residual values aren’t as good either but the new Jeep Grand Cherokee is one of the best value large 4x4s on the market.

For more information check out Jeep.co. uk or the Jeep UK  facebook page