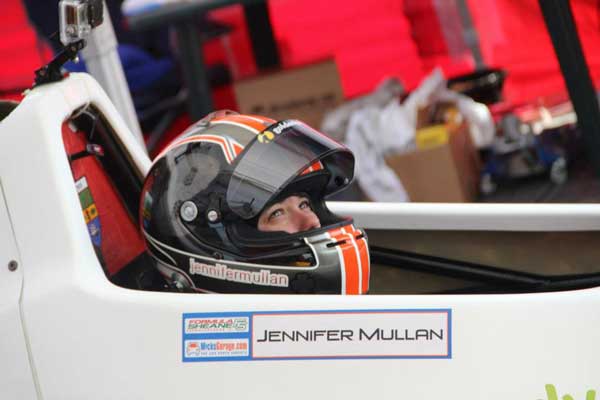 It’s been a long Winter but finally the 2013 Racing Season has kicked off. We catch up with Jennifer Mullan as she starts this year’s season.

After a long winter the 2013 Racing Season is now here and with the first event of the year under my belt I have lots to tell you all about. As everything in Motorsport usually is, sponsorship announcements and the final preparation of the car was all last minute so I didn’t get to put a blog together for you before Round 1 of the Formula Sheane Championship at Kirkistown last weekend.

I am now delighted to tell anyone who may not already know that this year I will be racing for a new team, FCR Media Racing in a white Formula Sheane with the support of SaySo.ie and MobileReady.ie. However my teammate Barry Rabbitt will be flying the flag for goldenpages.ie along side me as all these brands are managed by FCR Media.  It is very exciting to be promoting these new additions to the racing scene in 2013 and hopefully we can have plenty of fun and success together.

With pretty much no testing apart from a few shake down laps in Mondello Park after the winter rebuild we loaded up and headed off to Kirkistown for Round 1 of the Formula Sheane Championship last Thursday night. We were very excited to get going despite the lack of sleep from all the late nights that week but when you arrive at the track and roll the car off the trailer you remember then why you do it. It was soon time to hit the track and get some testing done at around 11am. It was going to be a busy day with a packed timetable for the weekend as this was the first meeting of the year. The busy timetable meant we only got 3 sessions in testing but this was enough to iron out plenty of the minor issues we were having.

As is traditional on a Friday evening in Kirkistown we headed to the bar/restaurant for dinner in our shiny new team clothing all looking the part. The circuit put on a great spread with a 3-course menu available. It was great to sit down and relax for a while and take stock of where we were. This included me feeding Barry the majority of my dinner in the hope he might give me a few of his tips that had him going so quickly earlier in the day. With the important business taken care of the guys on the team Nathan, Keith and Paul got back to the hard work through out the rest of the evening and had both of our cars looking great for Qualifying on Saturday morning.  I on the other hand went to bed and as for Barry, the story goes that he was too full after eating my dinner to leave the bar and stayed there a little while longer.

Saturday morning greeted us with nice weather and things were looking positive for the day ahead. We headed out together on track for our 15 minute qualifying session and it was clear after 3 or 4 laps that all was not well in my car with the brakes. I did the best I could to put a competitive time in but the brakes got worse and I was forced to retire to the pit lane just before the chequered flag. The guys diagnosed the problem to be a seized front master cylinder causing me to have no front brakes at all and they got to work on getting it fixed for the afternoon’s race.

Come the afternoon it was race time. I was starting from the back due to the earlier problems but I was focused on getting a good start and quickly moving forward. I used the warm up lap to try and get a feel for the brakes now they were fixed and set them up as best I could for the rest of the race. As I had planned I got a great start and passed two cars before the first left hand kink known as Debtors. Not being confident on the brakes though one of the guys got back past me at the first main corner, Colonial but I was still on the tail of the guys in front. I set about defending into the third corner Fishermans but something was not right with the car’s handling but I couldn’t quite figure out what it was. I dropped to the back again and set about chasing the guys down. It wasn’t until the next lap at Colonial I ran really wide and heard that awful noise from the back of the car that you hear when you have a puncture and there I had it, I figured out my problem. I was pretty much at the furthest part of the track from the pits at the time but I had no choice but to limp back around and try to not do any damage and see could the guys in the pits change it and at least register a finish. So with that said I made it back, Nathan and Paul did a fantastic job getting the wheel changed despite having to run back into the paddock for the necessary equipment as thankfully punctures are not something that happens a lot so we weren’t really prepared for it. They got the wheel changed and had me back on track in no time at all. I decided then all I could do was bring the car home and hope that I’d still register some points. When I got back out on track the leaders were approaching me so I just stayed out of their way as best I could and let them get on with their race. After a few laps the red flag came out and I was over the moon as generally when this happens the race gets restarted as a new grid and I would have got my laps back and stood a great chance of making up a few positions. Unfortunately this wasn’t to be and the organisers called the race a result and I was classified 13th overall and 5th in the scholarship class scoring valuable points.

Its fair to say that if it wasn’t for bad luck we would have had no luck on this occasion but all in all it was a good weekend, we got a lot of issues ironed out and are in good shape heading into the next event in Bishopscourt Co.Down on 11/12 May.

I would like to thank my sponsors www.SaySo.ie, www.MobileReady.ie, www.goldenpages.ie, www.motorsport.ie, and www.wheelsforwomen.co.uk   and Thomas J. Graham Sand & Gravel for their continued support as with out them and the hard work of my team FCR Media Racing none of this would be possible!

Jennifer competes as a racing driver in both the UK and Ireland and joined the Formula Sheane Championship, in 2012 with Sheane Cars and is the first woman to race in this super competitive championship. Look out for regular updates in Jennifer’s Driving Diary. You can follow Jennifer on Twitter at @Jennifercmullan