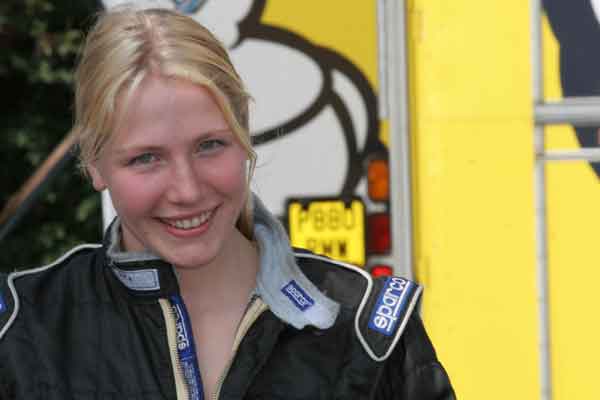 The 28-year-old mother of two from Burton-on-Trent took time out from racing to start a family with husband Richard, after successfully racing single-seaters including a 680bhp Jordan Formula One car in the EuroBOSS category.

Jodie now aims to begin a new chapter in her career, beginning with her Michelin Clio Cup Road Series debut next weekend in a 200bhp race-converted Clio Renaultsport 197 car, as she sets her sights on a future in the ranks of GT racing.

“I want to show that mums can be racing drivers and having children does not have to spell the end to your career”, said Jodie, “I am probably physically fitter than when I was competing [in single-seaters] and can’t wait to get back into racing again as I feel I want to race now more than ever.”

Cheering her on trackside will be Jodie’s biggest fans, daughters Emily and Jessica plus husband Richard who will be enjoying a weekend away from his job working for the Brackley-based Mercedes AMG Petronas F1 team.

Oulton Park, near Chester, is well known as one of the UK’s toughest tracks but Jodie is relishing the prospect, adding: “Oulton is one of my favourite circuits as it is so technical and a true driver’s track where there is no time to relax as your adrenaline pumps at maximum all the way around. I’m going there to win and make the most of this fantastic opportunity.”

Team manager at SWB Motorsport, Simon Baldry, commented: “Jodie was one of Britain’s best female racing prospects when she was racing in single-seaters and I can see a whole new world opening up for her starting with racing our Clio.”

Notably, next weekend’s race meeting will mark the first stand-alone races for the new Michelin Clio Cup Road Series which, up until now, has been a class within sister championship the Michelin Clio Cup Race Series – the latter featuring the thoroughbred third generation racing Clio Cup car.

In addition to Jodie’s arrival in the ‘Road Series’, another new driver joining the grid will be car racing debutant Jonathan Creasey (Lincoln) with his new team Paint Perfect Motorsport. Creasey officially launched his 2014 campaign this week in-front of gathered guests and sponsors at Blyton Park near Gainsborough.

Along with headline sponsors Michelin and Protyre, the Clio Cup Road Series is additionally supported by DNA Tuning, Ferodo and Safety Devices.