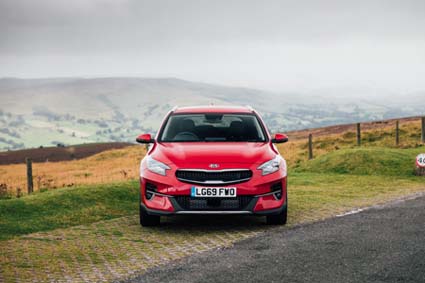 The XCeed is the fourth member of the Ceed family,

What is it? Imagine the current Kia Ceed with high heeled welly boots and a trekking rucksack. The XCeed is higher from the ground whilst it still retains hatchback dimensions, it is part of a small crossover market.

Who is it aimed at? The sporty compact crossover is aimed at small families or couples, the heightened ride would be an advantage over rough terrain but this is certainly not an off-roader and it has no four-wheel-drive system.

Styling? The XCeed takes its styling from the rest of the Kia range with sharp lines at the front ending with a smoother outline to the rear. The top range ‘First Edition’ comes with 18” wheels and privacy glass to the rear windows and tailgate as standard. The extra black plastic cladding you get around the wheel arches are merely aesthetic and are for styling purposes rather than usability. The XCeed sits 42mm higher than the regular Ceed, but Kia are keen for the consumer to view this as a sporty crossover and this is aided with the low roofline.

Under the bonnet? The Kia XCeed comes with a choice of two petrol engines, the 1.0-litre turbo making 118bhp and the 1.4-litre turbo making 138 bhp. There is also one diesel option, the 1.6-litre turbo that has two power outputs of 114bhp and 134bhp. As tested the 1.4-litre petrol with a seven-speed automatic gearbox was refined without being particularly exciting. A plug-in hybrid model is planned for 2020 to complete the engine range.

What about inside? The interior is well designed and put together with everything to the driver’s disposal, this also includes the heater controls that are actually physical buttons rather than done through the infotainment touchscreen like other cars. The 10” infotainment system is easy to use and the test car came with Apple Car Play and Android which is a necessity in this day and age. 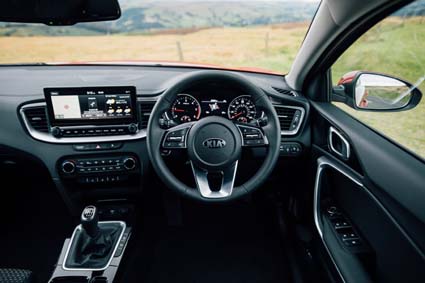 The interior for front-seat passengers boasts plenty of room, the rear with its raking roof lines means it isn’t really big enough to transport adults comfortably in the back. The boot is slightly bigger than the regular Ceed which is one of its saving graces.

I found visibility particularly difficult, the large and thick C post makes it impossible to see when reversing around a corner.

On the road? The XCeed handles well, the increased ride height doesn’t seem to have made a huge different when cornering or driving at pace, and to be honest once behind the wheel I completely forgot it was a crossover. Its a sure footed car, and if you are transporting important little family members around you want to feel that a car will stick to the road, thats the feeing I get with the XCeed. There is a driving function button which enables you to put it in a sport like mode, with the auto gearbox it just became annoying so I never used it.

Safety? Safety options as include Blind-Spot Collision Warning, Lane Keep Assist, Driver Attention Warning, Forward Collision Avoidance, High Beam Assist and Hill Start Assist all as standard throughout the range. As yet the XCeed hasn’t been tested for its Euro NCAP rating.

What are my options? The Kia XCeed across all trim levels comes with a huge range of equipment as standard, top of the range ‘First Edition’ has plenty to offer but that comes at a price. Metallic paint works out as a £570 extra, the middle trim level 3 offers plenty of extras and equipment and a more respectable price.

Will it break the bank? As tested the 1.4 T-GDi engine claims figures of around 47 mpg, with an automatic gearbox and every day driving conditions I worked out fuel consumption to be in the 30’s. The most economical is the 1.6-litre turbo diesel which claims 64mpg, but with the demonisation of diesels I don’t think this will be a popular choice. The 1.0-litre petrol engine on paper seems fairly economical but could be gutless and less fun to drive than the bigger engines. With every Kia though you can be safe in the knowledge that they all come with a 7-year/100,000 mile warranty which is undoubtedly its best selling point. 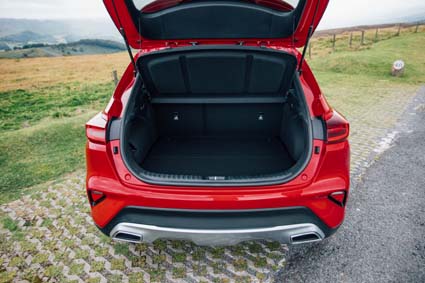 So the verdict After a week with the XCeed I couldn’t really work out where it fitted within the Kia range, they already have the Stonic, Niro and Sportage which offer a heightened ride and crossover looks. There is nothing wrong with the XCeed as such but its just another crossover model in an already cramped market and its price tag isn’t hugely welcoming. But in its favour the options and extras it gets as standard are hugely impressive and the warranty will provide the piece of mind everyone wants when buying a car.

Why you won’t? Pricey, not very practical

Eight things to know about the Kia Niro