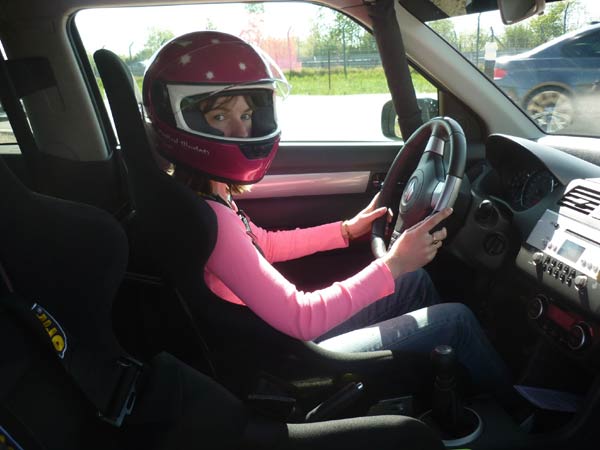 Nicknamed ”Grüne Hölle”or “The Green Hell” by Jackie Stewart, sooner or later any serious car enthusiast will be drawn to the Nürburgring, Laura Keane remembers her first time

Where to begin…We arrived in Frankfurt at a reasonable hour, feeling sorry for the folks driving over, but not regretting our mode of transport either. Asked where we were going when picking up the rental – it was enough for my friend and I to hold in the laughter while we ‘made up’ some direction.

There are some serious roads on the way to Adenau, with crazy hairpins. We were so excited we didn’t even check in to our apartment beside Ex Muhle, and we headed straight to The Ring. Met another arrival and had a chat while we waited for the track to open after an accident. Wandered around the car park for a while,  some serious metal parked up  – a GT3 RS in green gleaming in the sun to mention but a few…  At the end of your trip though you tend to get a bit blasé about all the supercar metal there.

I had ‘The Fear’ something serious at this stage, to the point where I was thinking of packing it in. The following morning I bit the bullet and headed down to collect the fully track prepped Suzuki Swift. The guys at Rent4Ring are really nice, I would definitely recommend them. I had never driven LHD before, so I drove to Adenau and back so I could get the swing of it. Thankfully I had it in no time, it wasn’t as bad as I thought; getting used to the correct sides of the road was worse!

So I went out for two passenger laps to get used to the track, I couldn’t get over the pace, it was unreal!

Some of the Megane R26R’s were absolutely flat out. Then it was my turn, and serious fear set in. Pulled out of the car park and headed toward the first bridge with a bike overtaking me at about 100mph while doing a full on wheelie mid changing gears. After a short time I was flying it too. The little Swift can handle so well, and the Toyo 888s really help with traction. The brakes take awful abuse, as do the gears, but it was very forgiving and I would recommend it as a first time car for The Ring. Got around twice without trauma, then from what I had heard from seasoned goers was to get lunch, a nap and come back for an evening session. BIG MISTAKE. A fatal accident closed The Ring for the rest of the evening which meant I had hired a car for a full day and only got two laps in. 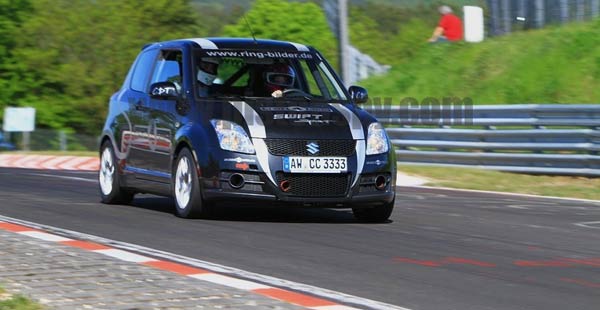 I was absolutely distraught; I came to The Ring and only did two laps!! I was itching to get out again. So I decided to see if I could hire the car again for the following afternoon, so with some puppy dog eyes and the guy there calling in favours, I managed to get the car again. One thing I learned, if the going is good – keep going. I headed out this time for four laps, seriously picking up the pace. Lines, bends and braking points were becoming familiar. Some special moments I recall was having The Ring taxi drift around the outside of me while doing 150mph into a bend, hearing my friends screaming my name so loud in Adeneaur Forst as I passed, and panicking at cars behind me, missing gear and going into neutral coming out of Kesselchen were there are always big crowds, realising loss of power and throwing it into second – bohp! and a round of applause from the crowd!!  I also asked a passenger to show me how best to approach ‘Miss Hit Miss’, the first time I did it perfect, second time I hit it with the two left tyres – nearly launched the thing into the air! From then on in it became affectionately known as ‘Miss, Annihilate’ Miss’.

The thoughts of the Karusell frightened me at first, but by the end it was one of my favourite bends, going so fast around it you’d need a sports bra and you get shot out of it like a pin ball machine! The car got a bit twitchy at times, but nothing that couldn’t be handled. After several laps the tyres felt like they were getting a bit too hot to grip 100% anymore, in retrospect I should have let it cool down, but I was so afraid the track would close again.

I found the general attitude on track to be (while fast paced) quite civilised. They give you a chance to get out of their way or vice versa – all in all very little dodgy moves. I’ve seen worse behaviour at open Irish track days.

Let me tell you this now – The Nordschleife is not for heroes. It’s not someplace you go with all guns blazing – and a stop watch in your hand. It’s the most dangerous track in the world for a reason – it has claimed countless lives. And crashing is something that just can’t happen, unless you have about 10 grand or more lying handy in the bank. No insurance you can purchase covers track closures, the amount you are charged per meter of Armco you damage, for helicopter lifts or clean up. It is a public road – the local police will be called and it will be treated like any other accident – if you bring your car and someone is injured or dies due to fluid from your car leaking onto the track, you will be held responsible. Take it handy, go there for the experience and fun, and end it on a positive note. Respect The Ring and it will respect you.

So that’s it, I think the best I got was somewhere a little over the 10 min mark, but that was at 80%. It is simply something you have to do, nowhere in the world is like it, and while it is a long track, there is not a second where you are not challenged or preparing for the next bend.

P.S. The best alarm clock in the world is the sound of CSL’s approaching Ex Muhle at 7.30 in the morning.

Equine science graduate, loves all animals, has two Siamese cats, fish and a snake. Also loves music, fashion, driving, cars and track days. If there is a dance floor – she'll be on it!. You can follow Laura on Twitter at @optical_laura

Old Reliable – Keeping an Old Car on the road