Life with a Jaguar F-Type Convertible 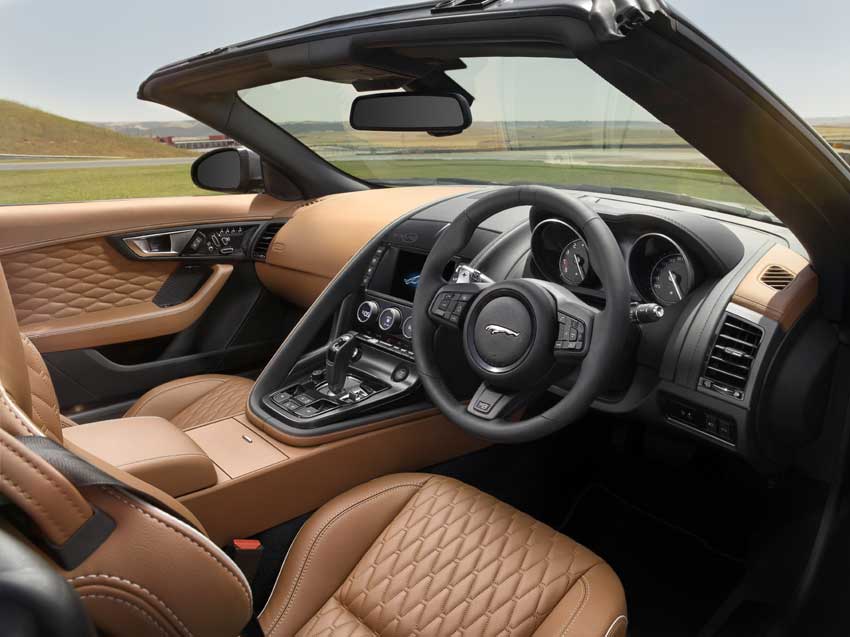 Ginny Weeks tries a week with the F-Type Convertible

Day one
The Jaguar is delivered and parked a little down the road from my house. I’m surprised how understated it is; for such a ‘statement car’ it fits in pretty well on a suburban street in South East London. This particular car, an all-wheel-drive S convertible, is painted in a steely silver colour. It has over £11k’s worth of options, but strip that all away and the basics are gorgeous. I mean, just look at it. It’s beautiful. That design! Inside is just as special. Sit in the driving seat and your eyes jump from one detail to another, from the orange start button and paddle shifts on the steering wheel to the lux feel of the leather and metal trim. It’s classic Jaguar elegance blended with 21st century sports car.

Day two
Finally out of the office and time to take the Jaaag out for a much needed spin. Sadly that just involves a Sainsbury’s trip today as I’m late back. I press unlock on the key and the pop-out door handles slide out to let me in. Press the start button and the 3.0 V6 supercharged engine roars to life with a ferociously over the top exhaust note. Neighbours suitably alarmed, I pull off for a little blast around South London. It’s straightforward and wonderful and the boot managed to fit in a large shop with ease (even if on first glance it looks pretty tiny).

Day three
Up early and my boyfriend is running late for the train (again) so I give him a lift to the station. Reversing out of a driveway on to a busy street is a bit of a struggle with the convertible roof up (even with the reversing cameras) so I pop it down, feeling a bit of a show off as school children walk by. Safely out – people let you out in sports cars, I discover – I put the sports exhaust on for the ten-minute journey and the burbling, popping sound is pure delight.

Day four
After what feels like an eternity the weekend arrives and I can finally get out of London with my boyfriend and dog Fly. With two suitcases and a couple of bags, plus small dog in the front, it’s full up. We wait until the traffic has died down and head South West to Devon, testing the car on motorways and those classic British A-roads it’s built for.  As we past Stonehenge, the autumn sun starts to set. The convertible roof couldn’t be easier or quicker to operate, but we found it a bit noisy for chatting. A wind deflector would definitely be a good investment.

Day five
My mum notices I have a ‘new silver car’ in her driveway, but that’s about all the excitement I get so I decide to drive to pick my brother up as a surprise. It’s always fun sharing beautiful cars with other people and seeing their reactions too. Safe to say the F-type goes down very well with him and his friends. And everywhere else, this car really turns heads.

I head to the coast on a road I know very well and it’s one of the best drives I’ve ever had. The engine is pure joy; just the right amount of power, confident and thrilling, but forgiving with the sort of handling that puts its rivals to shame. And that noise! I’m getting back-to-normal-car dread already.

Day six
Still on a quarter of a tank of fuel I take my mum to my grandma’s house over in Totnes. The problem is that with the low front bumper we can’t get up the steep driveway so we leave the car on the street below. My grandma, who loves her cars too, has an excited peek at the interior. I actually can’t wait for the journey back to London later.

Day seven
Over 600 miles later the F-Type is waiting patiently to be collected. Parked in the driveway it’s barely wider than my regular car – a VW Up! – and I realise again how streamline it is for a car that feels so like a big sports car. Ah I will miss this one. Jaguar, what a triumph.

Freelance lifestyle writer, trend forecaster and digital consultant Ginny Weeks has contributed to a range of titles (both online and in print) including Psychologies, Coast, MSN Food, MSN Her, MSN Cars, MSN Travel, Harpers Bazaar, Top Gear and 1883 magazine. You can folllow Ginny on twitter @GinnyWeeks

Nine things to know about the Jaguar I-Pace concept car