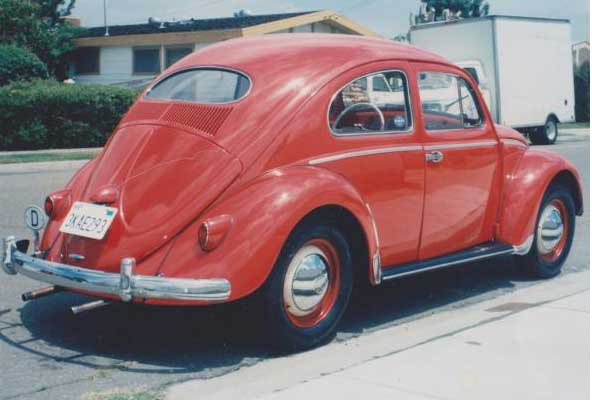 This is just what my first looked like – the color, style, and everything else is spot on – right down to the orange rims

What was your first car and why did you buy it? My first car was a 1955 VW Bug. The year was 1969. I didn’t choose it – it chose me. It was a ‘hand-me-down’ from my big brother who had taken it over from our mom. It had done a few miles at that point but still ran like a dream – partly because my big brother was a serious engine buff and loved tinkering with it. He even (built and) dropped a Porsche engine into it at one point and raced around – revving the engine like mad. He replaced it with the original engine when I took it over though. Good thing, because it had so much kick with the Porsche engine in it that it would have been a snap to roll it if you cornered too fast.

What did you pay for it? Just the gas and upkeep – and that wasn’t even bad at that point in time. I could fill up the tank for less than 5 dollars back then. Ha! that was a lifetime ago.

How did it change your life? Freedom! Being independently mobile as a teenager is an exhilarating experience!

What was the longest trip you ever took in the car? Can’t remember. The car was in our family for years and we drove everywhere in it – even long trips.

What was your best memory or most memorable moment in the car? Once, the car battery died while I was at college. I was alone and my only option to start it was by pushing. Luckily, I was parked at the top of a small hill, so I only had to push it a short distance before I could jump in and start it with the clutch. I was proud as a peacock when I got it right first try.

What was your worst memory associated with the car? There was no gas meter. When the car started ‘hacking’ and ‘chopping’ because it was running out of gas, you flipped a lever on the floor with your foot to open the reserve tank. Every time that happened I couldn’t find a gas station fast enough. I hated not knowing how much gas was left in the car.

How long did you keep your first car? Three years. It stayed in the family though. My younger brother took it over. And a few years later, when he was finished with it, he sold it to a ‘Bug Collector’ who souped it up and kept it running for ages. Wouldn’t surprise me if it’s still puttering around somewhere.

A “Bright” Guide To Car Bulbs