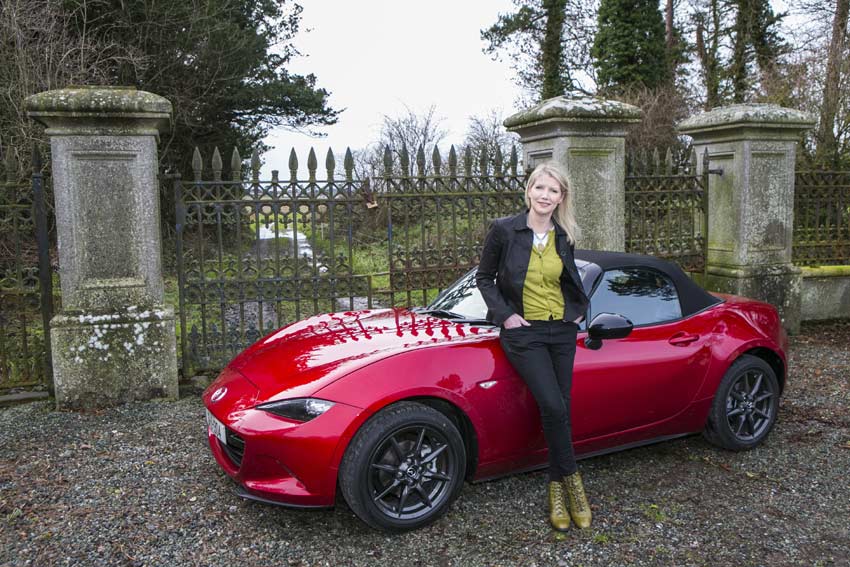 Roadsters always conjure up visions of freedom and fresh air and the Mazda MX-5 is no exception, writes Geraldine Herbert

What is it?  Deemed the most popular two-seat sports car in the world, it’s hard to disagree.

Who is it aimed at? It’s now more than 25 years since the original Mazda MX-5 went on sale and the appeal is simple -it has always been eye-catching, a blast to drive and comes in at an affordable cost. So can the fourth generation really improve on such a winning formula

Styling? It may not look it but the new MX-5 is actually smaller and lighter than the previous version. In fact, the new fourth generation is the lightest version since the iconic original, weighing nearly 100kg lighter.

Under the Bonnet? It gets a brand new rear-wheel drive chassis and a very impressive 1.5 non-turbo petrol engine. With 129bhp, a 0-62 time of 8.3 seconds and a top speed of 127, it feels so much faster than the figures suggest, but then the MX-5  has never been about power or speed, but rather, that smile it puts on your face when driving so low down makes it feel so much quicker. There is also a more  powerful 2.0-litre engine with 160ps available.

What about inside? Mazda has maintained a classic sports car feel inside but has also added up-market features, including a new seven-inch touch screen.

On the Road? On the road, it handles beautifully and is perfectly balanced with sharply honed steering. A really nice feature is the new, short-throw sporty manual gearbox that is fantastically slick. On the twisty back roads the weight loss is obvious and it now turns in even sharper than before, giving an almost-unmatched agility. It is, however, noisy, even with the roof up, and the seats are not the most supportive – similar to the previous version – and would prove unforgiving on a long journey. Operating the roof is simplicity itself. There is one single latch in the centre, all you need do is simply unclip it and throw it back. Press down to click it in place and it all takes about three seconds, without even moving from the driver’s seat. But it does feel a little tight with the roof up, a feature probably more noticeable at this time of the year, and at 110 litres, the boot is tiny.

And Safety?  The new Mazda MX-5 offers improved levels of safety, including Mazda’s i-ACTIVSENSE active safety technology. There is also good news for pedestrians, as new sensor technology compensates for the MX-5’s 28mm lower bonnet by raising it higher during an impact. This is designed to protect a person’s head by expanding the space between the bonnet and the engine.

Verdict?  The new Mazda MX-5 does not disappoint. At a time when cars are getting bigger, heavier and are crammed with technology, the new MX-5 is so refreshing – it is back-to-basics motoring at its very best. Despite having a minuscule boot and feeling a little cramped with the roof up, for the money, it’s still the best roadster around. And if the price doesn’t put a smile on your face, the driving experience will.

Why you won’t? Space

For more information check out Mazda UK or the Mazda  Facebook page.