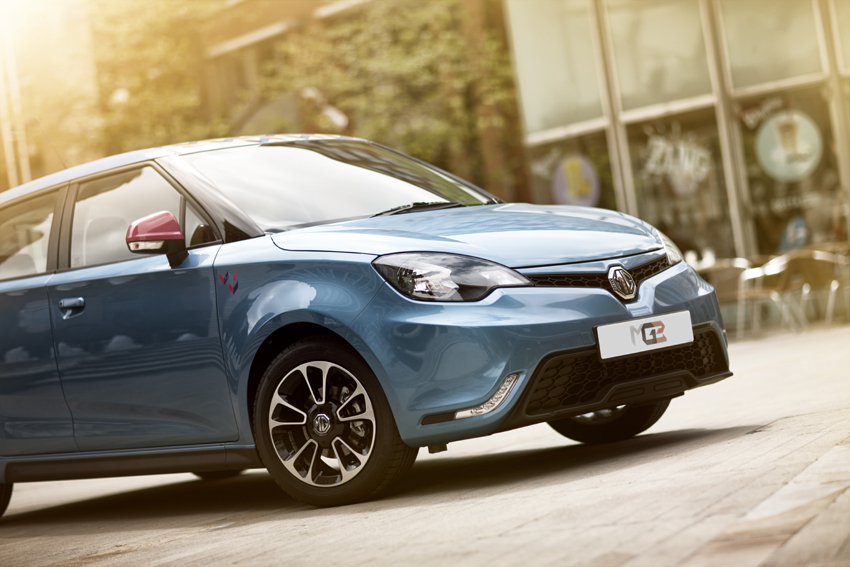 What is it? This small sporty looking hatchback is MG’s representation and is looking to enter the seriously competitive market of the supermini. Available with only one engine choice, can it be versatile enough to capture the hearts of the public.

Who is it aimed at? From the exterior styling and the options available it looks set to be aimed at the younger end of the market as a first car. But equally the history of the make may make it desirable to the older age bracket of drivers.

What about Styling? The MG3’s styling really makes it stand out, the five door configuration fits nicely and the car is well proportioned. The bumper and running lights give it a sporty looking front end, the 3Style model comes with 16” alloys, sport design grill and valances that give the exterior that extra bit of kerb appeal.

Under the bonnet? All MG3’s come with the same 1.5 litre petrol engine that gives out 106 BHP. Its a shame that MG don’t offer a smaller turbocharged petrol engine as an option, or even a diesel as the engine is very sluggish. It requires a lot of revs to get anything to happen quickly and in turn the engine has to almost have its neck rung for any kind of acceleration.

What about inside?The interior seems well put together, the test vehicle had over 10,000 miles on the clock and there were no shakes or rattles from the interior at all. The basic layout and abundance of plastic let it down, but the seating position was good for me and the controls were easy to use. The splashes of red plastic aim to enhance the sporty nature of the car but in essence this car is cheap to buy so don’t expect brushed alloys or superior materials. The MG3 3Style does come with DAB, Bluetooth and Aux-in as standard.

On the road? The MG3 seems most comfortable driving through town, the gearbox is smooth but the lack of acceleration means overtaking or making any kind of progress has to be planned in advance. The steering is good in the corners and feels direct, which in turns gives confidence to the driver. The suspension is too hard, and feels like every imminent bump could land you in bed for a couple of days.

Safety? There are six airbags, stability control, hill hold and brake assist as standard on the MG3. But the Euro NCap rating of three stars puts it well behind other cars in its class.

What are my options? The option list is pretty small but you can customise the look of the MG3 by having metallic paint (£395) exterior graphics (£199) and painted wing mirrors (£39). Part leather trim is an added £500 but with the 3Style trim level there is plenty of standard equipment available.

Will it break the bank? The engine used on the MG3 isn’t the most economical in its class, it has emissions of 136g of CO2 per 100km which equates to a yearly bill of £130 in car tax. In a class where most of the cars are £30 per year or under for car tax, this puts the MG3 at a major disadvantage. Combined economy for the MG3 is 48.7mpg and an insurance group of 4E makes it fairly cheap to insure. The MG3 has a low start price so residual values may not drop too drastically, but a small dealership network may mean its hard to get servicing and repairs done locally.

So the Verdict? So close, but yet so far away springs to mind with the MG3. The car looks good but is severely let down with the engine and it feels like MG are years behind other manufacturers with engine design, output and emissions. A new improved engine and a better suspension set up would make the MG3 a better car and surely help it in what is a very competitive market. On paper it looks great value and the price is extremely tempting, but for me there isn’t enough driver enjoyability.

Why you’ll buy one? Competitively priced;