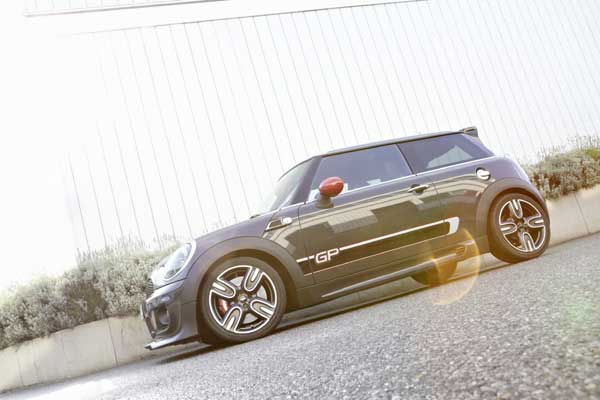 We get behind the wheel of the raucous MINI JCW GP, the fastest production Mini ever made and one of only 2,000 in the world!

What is it? Essentially the same car as the Cooper S with its turbocharged 1.6-litre engine, this version has been treated to a host of modifications that boost its power output from 184bhp  to 218bhp making it the fastest road Mini ever made. Only 2,000 of these super fast minis have been produced.

Who is it aimed at? Priced at £29K this hard-core GP model will be too hard core for most tastes and way too pricey for most pockets.

Styling?  Masculine and aggressively styled, the Thunder Grey paint job and  “GP”-badged side stripes running between the front and rear wheel arches hints at the menacing power lurking beneath the bonnet.

What about Inside? Inside there is room only for driver and “co-driver”, both snug and held firmly in place in their Recaro bucket seats. In the back there are no rear seats, instead there’s a red strut brace across the width of the body. There’s more bracing under the bonnet to stiffen it up. Elsewhere it’s all recognisable and miniesque and everything inside is in keeping with the racing theme. It is finished in Piano Black with an Anthracite roof lining and a leather sports steering wheel. 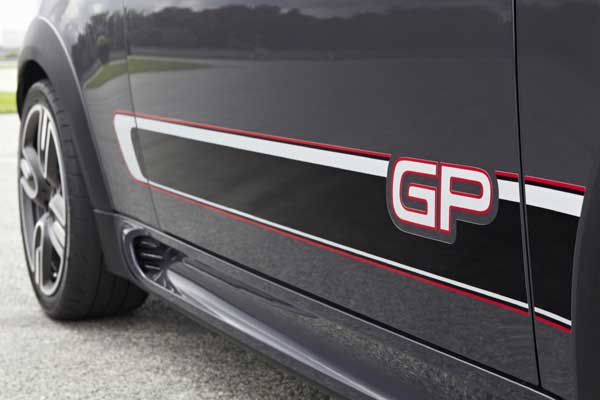 On the Road? Mini engineers know a thing or two about extracting every last bit of power from a car and this Mini sports a beefed up the engine and stiffened suspension. On smooth surfaces the ride is not nearly as bone-rattling as you may expect but take it on a back road and it becomes a little jarring. Regardless though it is sure footed, planted and a hoot to drive on any road. There are masses of power and the brakes are monsters with incredible force but while they may well be perfect for a race track around town they need careful use. That said it most certainly stops when you want it to. The handling is pin-sharp, the steering superb and if all that is not enough there is also the option to fine tune the suspension set-up  for even more hardcore handling.

And Safety? The Mini comes all the usual safety features found on the Cooper model  but since this is a car that focuses on the raw driving experience  some changes have been made so as to not impedes its sport progress, e,g, the DSC Dynamic Stability Control is not combined with DTC, as would normally be the case, but with a special GP racing mode.

What about fuel economy? On a combined cycle of motorway and city driving it returns a little under 40mpg, although put it on a race track and watch the fuel evaporate. CO2 emissions are 165 grams per kilometre.

Okay so the Verdict? With two seats, 218bhp and a top speed of 150mph this, the fastest Mini ever produced, is built for performance, pure and simple. While most of us will balk at the price tag of £29k for some, with both the money and the inclination, the lure of this fast and furiously fun Mini will prove too much.

Why you’ll buy one?
Handling and speed like nothing else, exclusive

Why you won’t?
Price