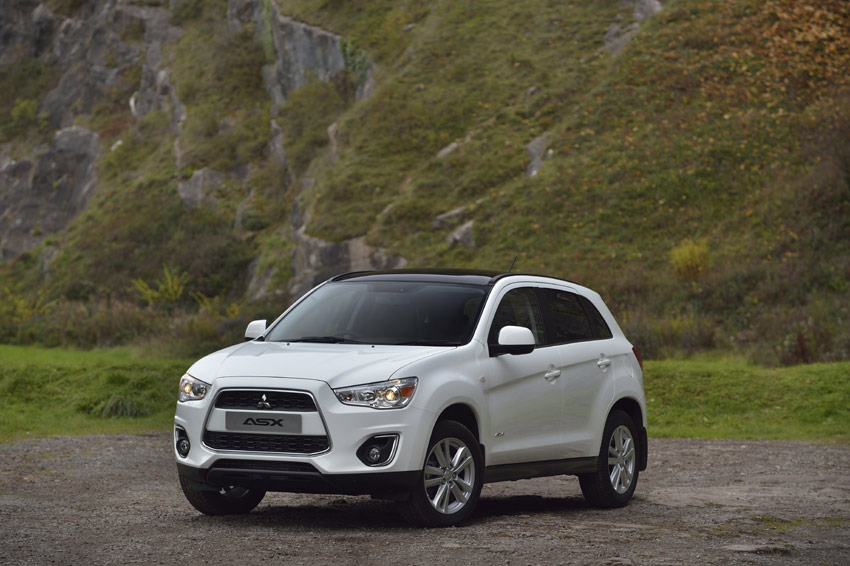 What is it? The name ‘ASX’ means Active Sports Crossover and Mitsubishi have developed a compact crossover with sporty underpinnings. Available in both two wheel and four wheel drive the ASX has a meagre starting price of just £15,249 which will surely tempt the tightest of budgets.

Who is it aimed at? The crossover market is huge, mainly due to its appeal and that it can fit so many people’s lifestyles. The Mitsubishi ASX is aimed at people who want the styling of a car but the space and ability of a crossover. The sporty chassis and the option of four wheel drive make it ideal at going off the beaten track or for towing.

And Styling? The ASX front end has the styling of the Mitsubishi Lancer and the compact exterior gives it decent kerb appeal. The top of the range spec features Xenon super white headlights that are extremely good, as did the numerous oncoming drivers who flashed me thinking I was on main beam. Mitsubishi have made the ASX less ‘boxy’ to keep it from looking like other SUV’s which makes the ASX look more like a hatchback on a heightened platform.

Under the bonnet?  There are three engine choices available for the ASX, one petrol and two diesel. If you require the four wheel drive system then you will need to go for the 2.2 diesel option which was fitted to the test car. The 2.2 diesel has 147 BHP and is a large engine for a relatively small crossover so acceleration is good. The engine noise vibrates through the cabin which does slightly ruin comfort and refinement, more sound deadening between engine compartment and cabin is definitely needed. The automatic 6 speed gearbox is good and changes are smooth. The 1.6 diesel would be the pick of the engines if four wheel drive is not needed, as its front wheel driven, lighter, more economical and quieter to drive. 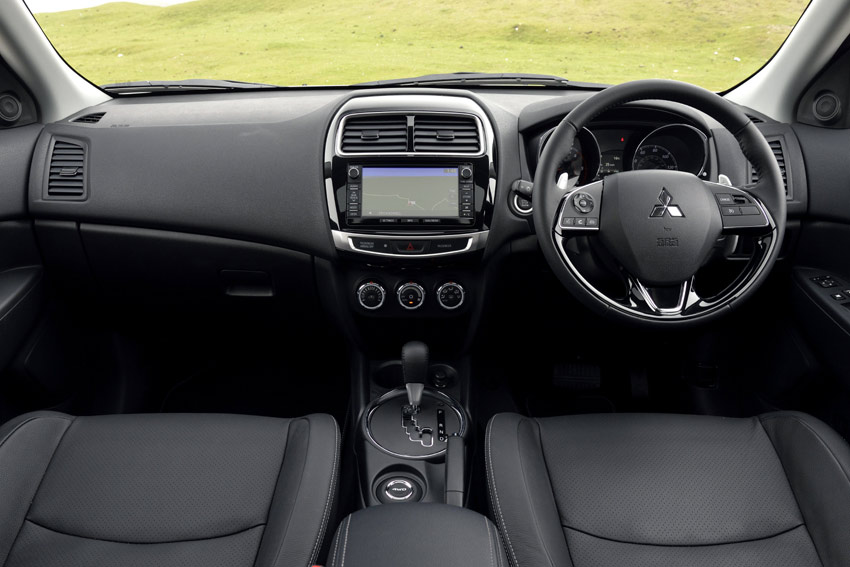 What about inside? The familiar 7 inch touch screen entertainment package comes as standard in the top spec model which includes DAB radio, CD player and a reversing camera. The dash is simply set out with gloss black trimmings and a suitable driving position can be mastered quickly through steering wheel and seat adjustments. The interior feels well put together, but don’t expect it to take your breath away, the interior is more functional than pretty. The boot space is a decent size at 442 litres and there is also a hidden 26 litres under the boot floor.

On the road? The Mitsubishi ASX is a sports crossover built on the Mitsubishi Lancer Evo platform, and there lies a bit of a problem, the ride is harsh and uncomfortable unless driving on smooth roads. The suspension is unforgiving and this means that the ASX doesn’t ride as well as its competitors, add to that larger option wheels and it can make a family journey into a bit of a roller coaster ride. Turn that on its head and if you are after a crossover with a bit of exuberance then the ASX excels, put it hard into a corner and it grabs onto the road superbly. The steering is precise and driven hard can be plenty of fun.

What about Safety? The ASX received top marks of five stars in its Euro NCAP score, it also comes with 7 airbags as standard. And the safety features don’t end there, there is also traction control, hill start assist, ABS and brake assist fitted to the ASX. The ASX also features the RISE (Reinforced Impact Safety Evolution) philosophy that helps protect the passenger department in an accident. The brake pedal is also designed not to impede on the driver and the seats are created to reduce whiplash injuries.

Will it break the bank? The test car with its 2.2 diesel gave respectable MPG, the official figure by Mitsubishi is 48.7 mpg combined, the automatic also gives CO2 readings of 152 g/km which equates to £180 per year on tax. By far the best value for money engine is the 1.6 diesel manual that emits just 119 g/km with a yearly tax bill of only £30 and a mpg figure of 56.5. Mitsubishi also offer a 5 year/62,500 miles warranty which is more than some other manufacturers.

Okay so the Verdict? The ASX has been developed to plug a gap in Mitsubishi’s range of cars and 4×4 trucks, and in part the ASX has all the credentials to make it a success. The 2.2 diesel is too loud and unrefined and the ride quality just isn’t up there with the best. The exterior styling and interior quality is good and the 1.6 diesel seems the obvious choice due to its lower road tax and value for money. Mitsubishi has excellent 4×4 capabilities and the ASX should definitely be considered if you are looking for a towing vehicle. Overall the ASX feels like it lacks the comfort and quality standard of other competitors such as the Nissan Qashqai and Hyundai ix35.