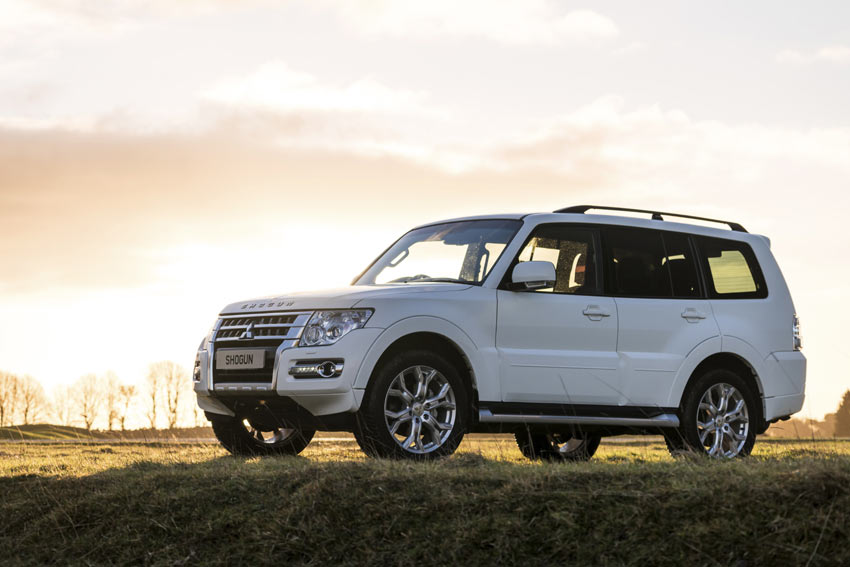 Hannah Gordon checks out the rough and rugged Mitsubishi Shogun

What is it? It’s amazing to think that the Mitsubishi Shogun has been around since 1982, but it has capitalised the off-road niche market. The latest Shogun comes in both short wheel base (SWB) and long wheel base (LWB) options.

Who is it aimed at? After getting behind the wheel you will realise what a capable off-roader it really is, although the drive is fairly dull on the road. The LWB model comes with 7 seats and plenty of boot space when these are not in use. It is an ideal farm vehicle or for families who need the space combined with 4×4 attributes.

And the Styling? The Shogun is a rugged vehicle with a bold front end and styling that matches its butch driving capabilities. The lowest trim level comes with plenty of gear including roof rails, side steps, fog lamps and HID headlights all as standard. The Shogun has a large amount of ground clearance essential for driving off the beaten track. Although not the prettiest of off-roaders available on the market it does seem well put together and able to withstand different driving terrains.

Under the bonnet? The engine used is a 3.2 litre diesel which provides just 187 bhp, this is very evident when driving on the roads just how much power this engine lacks, overtaking has to be judged correctly and when under strain the engine is incredibly loud. The 5-speed automatic doesn’t help either as it takes a lifetime to change up. The saving grace for the engine is the huge amounts of torque it produces which in turn make it a superb vehicle for towing, the LWB variant can tow up to 3.5 tonne.

What about inside? The inside of the Shogun looks dated now and the switch gear seems like its been carried along since 1982, but having said that it feels of decent quality and not something that will fall apart after the first year. All LWB models come with heated front seats, climate control and rear air conditioning as standard. The DAB and Sat Nav aren’t very easy to use and could do with an update. The inside is like the wardrobe from Narnia with plenty of space to throw literally anything inside, and the added attraction of the 7 seats, although the row of two at the back would only be suitable for children, or very small adults. 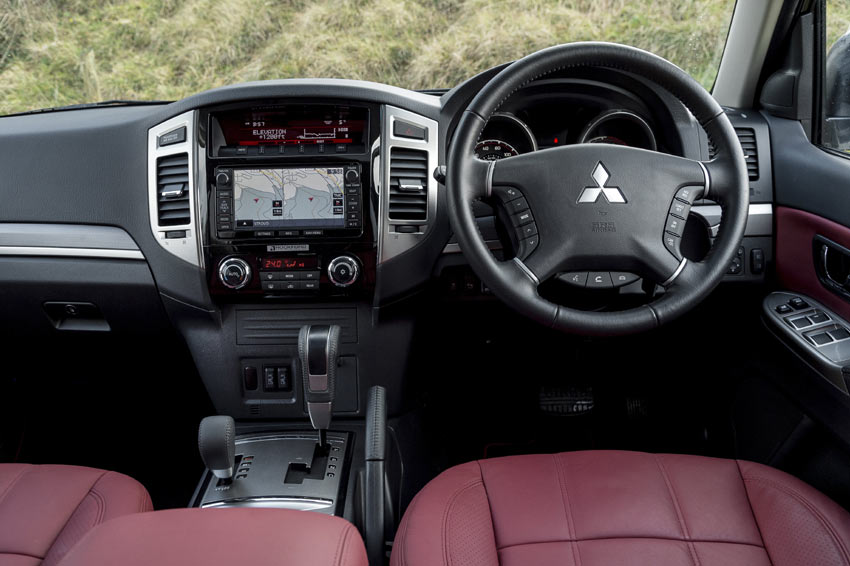 On the road? On the road it is not a very pleasurable drive, the engine noise is overpowering and intrudes into the cabin space making it difficult to hear phone calls or the radio. The lack of ratios on the gearbox means it doesn’t change up quickly enough and the high ride height results in a ‘wallowing’ effect around corners. Once settled on a nice flat, straight bit of motorway its fine, but really the Shogun is most at home climbing filthy mud paths and doing other terrains that only some vehicles can dream off. The Shogun comes with selective 4×4, this enables it to be driven in 2wd, 4wd and to lock the differential depending on what is required.

What about Safety? All Shogun’s come with Mitsubishi Active Stability and Traction Control (M-ASTC) which controls the brakes and engine output if it feels like the vehicle is becoming unstable or slipping. There are also 6 airbags throughout the vehicle that stretch all the way to the back to protect the passengers in the back row.

What are my Options? The Shogun is generously specced even at the basic of levels. With four different trim levels it is easier to go up a trim rather than specify individual extras. The SG3 trim tested came with the added bonus of a Rockford Fosgate sound system which was really good, especially when playing old school garage CD’s from the 90’s.

Will it break the bank? There is no such thing as economy with this vehicle, it has a combined MPG of just 30.4 and the CO2 output is mammoth at 245 g/km. This means that a yearly tax bill of £500 and a rather large fuel bill to boot. This car will cost a fortune to run but you do get a 5 year or 62,500 mile warranty and service intervals are 12,500 miles.

So the Verdict? I really wanted to like the Mitsubishi Shogun, having driven plenty of the old ones I do have a soft spot for them, I even used one to move house, but I’m not the Shogun’s target market. The Mitsubishi Shogun has plenty of space, superb off-road credentials, is a great towing car it just has zero character. Think of it as a workhorse going about its job without any frills, it may seem like I am being harsh on the Shogun but it really was lacklustre, the engine for me was the biggest let down. With the power outputs that many car manufacturers can get from smaller engines the brutish 3.2 litre diesel is loud, slow and very expensive to run.

Why you’ll buy one?  Spacious, Super Off road, Towing capability

Why you won’t?  Expensive to run, rough diesel engine