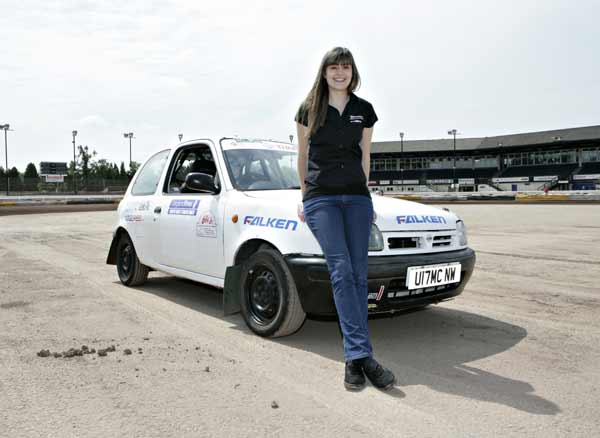 Raising the profile of women in motorsport is the number one task for 21 year old Hazel Johnson. The recent first class honours graduate, training to be a maths teacher and thanks to her family, has been involved in motorsport since an early age. Now Hazel is putting that experience to good use to get more women involved at all levels of the sport.

What age were you when you started?

I’ve been involved in some way all my life. As a child I used to go along to events with my Dad starting to Marshal by the age of nine. At 13, I began to help run events doing the results for Autotests and Autosolos. I began to compete on Autosolos and Production Car Autotests at 17 going on to do my first Stage Rally at 19. I have continued to organise and run events alongside competing becoming the Clerk of Course on five events at the age of 20. I also help to encourage other young people to get involved by being a Motorsport Instructor for the Under 17 Motor Club – North West as well as their Membership Secretary. I am currently competing in the ANWCC (Association of North Western Car Clubs) and SD34 championships including the Falken tyres supported K11 Micra Challenge. As a student, it is a fantastic way of continuing my driving as the focus is ‘rallying on a budget’ which allows driver talent to show as the cars are all equal.

Are you treated any different as a girl?

No. Motorsport is one of very few sports where men and women can compete on a completely equal level. Having grown up in the sport many of the older male competitors have been helpful and encouraging giving me advice and instruction when needed. I feel very supported by ANWCC with them starting new championships for youngsters to encourage their involvement and by fellow competitors who are always willing to help if something is going wrong.

What have you learnt in the sport so far?

From a driving perspective I’ve learnt so many tricks and skills, particularly doing Autotesting, which has helped in rallying. My dad and many of his friends have spent and continue to spend time in the car with me helping to improve my driving. Organising and running events has taught me how to deal with responsibility and confidently assess the risks of a potentially dangerous environment. This has helped in other aspects of my life.

How far would you like to go in the sport?

As far as I do. I love motorsport both organising and competing. My dad was runner up in the British Autotest Championship a few times but never won it so I’d like to win that to beat him but I’m happy with whatever I can do. I’m hoping to do a road rally in the future and would love to have a go at forest rallying at some point. I love the feeling of being behind the wheel and am just trying to get as much practice as possible.

Girl Racers – the Daring, Dashing women who blazed a trail on the early motor racing circuits…