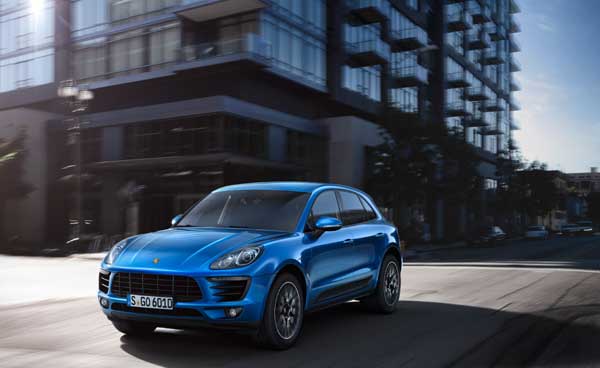 The sports car heritage of the Macan is evident in many details of its design.

What is it? The Macan is Porsche first venture into the compact SUV market, its the smaller sibling to the hugely successful Cayenne and Porsche hope that they can win buyers around in a market that continues to thrive. Based on the platform used for the Audi Q5, Porsche have taken this, stripped it and added there own thoughts and technology to provide themselves with a top notch base to begin with.

Who is it aimed at? As the name suggests its a Sports Utility Vehicle, which indicates it should be able to go off road. The Macan is all wheel drive but we all know that the vast majority of SUVs tyres rarely see a patch of off road terrain unless the driver has taken a wrong turn, instead Porsche have designed a vehicle thats going to delight the people who want a good ‘drivers’ car but who also like to sit higher than a sports car. The Macan is aimed at people who want a car that is able to go off road, drives well and isn’t as big as the Cayenne.

Styling? Porsche have developed an SUV that still retains the unmistakeable Porsche look such as the rounded headlights and the bulbous grills, an added feature not seen on any other Porsche is the clam bonnet that integrates the headlights and proved to be a problem for Porsche to get right. The Macan retains the sporty look thats synonymous with Porsche design, the sloping rear cuts into interior space but fits well with the Macan’s profiling. The car is well proportioned and has almost identical measurements to the Range Rover Evoque.

Under the Bonnet? The Macan comes with four engine choices, available is a 2.0 litre 4 cylinder petrol, 3.0 litre V6 turbo diesel, 3.0 litre V6 twin turbo petrol and the 3.6 litre twin turbo petrol. I drove both the 3.0 litre Diesel and the 3.0 litre petrol. I found the 3.0 litre petrol the best out of the two, it can get from 0-62mph in a hugely impressive 5.4 seconds, has 335 bhp and reaches a top speed of 158mph. The 3.0 petrol is refined, responsive and when teamed with the PDK 7 speed gearbox becomes the best drivable SUV on the market. The Diesel will undoubtable be the pick for most buyers as its more user friendly and returns 46 mpg compared to the petrols 31.4 mpg. The diesel itself is quiet and pulls well when asked to, the only indication you would have that its a diesel is the glow plug warning light lit up on a cold winters morning. One thing to be aware of is that with the diesel and the rules on emissions it includes an additive that lasts just 10,000 miles, this is replaced during a service but if it runs out the car is unable to be restarted.

What about  Inside? The cabin is laid out in such a manner that its a pleasure to sit within, some people may find the array of buttons slightly daunting to begin with but after just a few minutes and without even needing to read manual it all becomes second nature. Everything is within easy reach and the quality of finish is of a very high standard. The driving position is excellent and the range of adjustments would make even the pickiest of complainers comfortable. There’s plenty of room in the front of the Macan but that.s less true in the back, room is some what hampered by the sloping rear and even more if a Panoramic roof option is chosen. The boot space is fair with 500 litres available, certainly not the biggest but this car has never set out to be a carrier of the weekend recycling trip. Once inside and driving along road noise is kept to a minimum, the DBS radio and satelite navigation are easy to use and the sound quality from the Bose speakers is excellent. As standard the Macan comes with automatic rear boot, folding mirrors and a multifunctional steering wheel.

On the Road This is where the Porsche Macan really comes into its own, the tweaks that Porsche have made to the chassis and suspension ensure the Macan really does induce a beam from ear to ear. The Macan comes with a few suspension options, with the touch of a button you can go from comfort to sports mode, when going around the country routes the sports suspension setting is a must as it makes the handling sharper and more decisive. The test car came with 21 inch wheels, something that made the ride harder than normal but the quality of the handling and the smoothness of the ride is a class above anything else I’ve driven.

The Macan feels well balanced and holds the road superbly thanks to its all wheel drive system, the 7 speed auto changes are smooth and progress can be made quickly. Steering is direct and concise and the Macan feels like it always wants to go faster and dares you to push it harder into every corner.

Safety? As standard the Macan comes with front, side and curtain airbags, theres stability control that works on individual wheels by braking during sudden manoeuvres. Porsche have put a system in place that makes the vehicle brake after a having impact to prevent another impact from possibly occurring. Options on the Macan to aid safety include rear airbags and lane departure that recognises when the car might be switching lanes due to driver error. The Macan also achieved a five star rating when tested by the EuroNCAP.

Options? As standard the Macan comes with enough kit but some of the options available are well worth getting such as the Porsche Active Suspension Management (PASM) which helps to improve the ride, Bluetooth doesn’t come as standard and is essential for people who are always on the move, the reversing camera aids the driver into a reversing parking space. Options not really worth getting is the Air suspension at a pricey £1700 the PASM is a £1000 cheaper. And there really is no need for the large 21 inch wheels, true they do look good but do compromise ride quality and the 19 and 20 inch wheels are just as attractive. The panoramic roof is a costly extra and really does limit the already tight rear headroom.

Economy?The official fuel consumption figures are 31.4 miles to the gallon with carbon emissions of 209 g/km.

Verdict? The Porsche Macan simply put is the best SUV available on the market right now. The driving and handling are a class above rivals and the interior finish is superb, this car has pushed the boundaries of what an SUV should look and ride like. There is a good range of engines available but the pick of the bunch for me is the 3.0 litre petrol, its refined, fast, luxurious and will cause you less problems in the long run compared to the diesel. The Macan does have its bad points, its fairly pricey with a starting price of around £43,000 for the Macan S petrol and diesel models, there isn’t a lot of space if you’re thinking of lugging around people and luggage and the standard equipment list isn’t very generous when you consider how much the vehicle costs. All in all this is a superb package from a company on its maiden voyage into the compact SUV market.

Why you won’t?  Price

For more information check out  the Porsche.com /uk