Small in stature but big on space the Urban Crossover has been steadily gaining fans since Nissan launched the Juke in 2009.  We test drive two recent French arrivals, the Peugeot 2008 and Renault’s Captur

What is it? More hatchback and less SUV the urban crossover blends MPV like interior versatility with a high driving position. The Renault is based on the Clio while the 2008 is a beefier version of Peugeot’s 208.

Who is it aimed at? If you are after practical family transport with a go anywhere appearance outside and a bit more space inside then one of these urban crossovers just might be the car for you.

Styling? Pronounced ‘capture’ Renault’s new Captur is essentially a Clio on steroids, with chunkier SUV styling it shares styling features with its smaller sibling including a wide black grille and sharper  and more aggressive-looking headlights. Similarly conceived the Peugeot 2008 is based on the award winning 208 but is higher, longer and wider than its hatchback sibling. With smart styling and numerous personalisation options the Captur is a real head turner and makes the conservative styling of the 2008 almost dull by comparison. 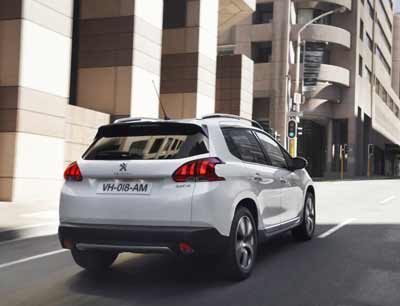 Under the Bonnet: Our Peugeot test car was powered by a 1.4-litre diesel. There is plenty of power for city driving but when overtaking it lacks some punch and its noisy with quite a bit of road and wind intrusion.  Other options include 1.2 and 1.6 petrol or a 1.4 diesel and two versions of the 1.6 diesel. Under the bonnet of the Captur lurks a 1.2 petrol, a 1.5-litre diesel or a tiny 898cc petrol engine. Our test car was the petrol version and on the road it’s surprisingly good.

What about Inside? Behind the wheel there is great view in both thank to the raised driving position. Inside the 2008 the chic styling from the 208 is carried over and it is spacious, comfortable and very plush. The boot is larger than the 208 with all seats in place but it can stretch to 1,193 litres with the seats folded. In the Captur funky is the buzzword and there are some really nice details and clever touches. Families with small children will love the zip off seat covers that you can remove and wash and features like the sliding rear seat will only add to the appeal of this car. The quality of the 2008 is better throughout but for sheer quirkiness we preferred the unique styling of the Captur.

On the Road?  The Captur is good around the city, while the spaciousness and high driving position gives the impression of a larger car its compact proportions make it perfect for zipping around town and you can park it just about anywhere. The light steering makes easy work of city manoeuvres. Negotiating the urban jungle it soon becomes apparent Peugeot’s 2008 is neat and nimble. It is good to drive, there is little body roll on corners and it’s very easy to manoeuvre. Both cars are set up for comfort rather than sport but they are engaging to drive.

And Safety? The Renault Captur scored a max of five stars when it was tested by the EuroNCAP and has a variety of adult, child and pedestrian safety options. There’s no Euro NCAP rating for the 2008 yet but there’s no reason to think it won’t achieve five stars. It  comes well equipped with ESP, 6 airbags, child safety locks and cruise control-speed limiter as standard. 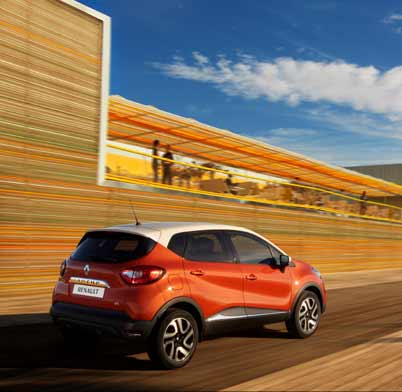 Options?  Four trims are available on the Captur,  Expression, Expression+, Dynamique MediaNav and Dynamique S MediaNav. There is also a long list of personalisation options including a contrasting roof. Similarly four versions of the 2008 are offered, Access+, Active, Allure and Feline.  Like the Renault Captur, the 2008 does not have four-wheel drive but it does however come with an optional grip control system that comes as standard on Allure and Feline models. This system gives you maximum on slippery or muddy conditions so it is a very credible alternative to traditional 4WD systems.

What about fuel economy?  The Peugeot 2008 delivers an excellent 70.6 mpg on combined driving of motorway and city while the tiny little petrol engine  in the Captur manages 56.5 mpg over the same roads. Co2 emissions are 104 and 115 g/km respectively.

Okay so the Verdict? Both cars combine space, style and practicality and you will not be disappointed with either. The Captur is a very tempting proposition if you’re looking for a stylish car with attitude that delivers economical driving on a budget while Peugeot’s 2008 has a very chic interior and good handling. The 2008 just nudges ahead in our opinion.   Overall it’s better to drive and with the option of grip control it’s the more practical of the two.

on the 2008 check out peugeot.co.uk or the Peugeot UK Facebook page.
on the Captur check out  Renault.co.uk