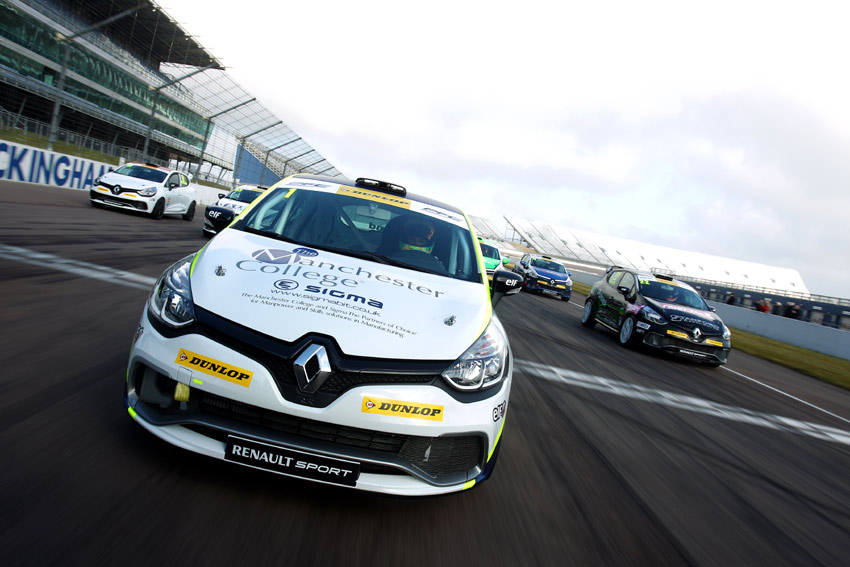 I arrived early on Wednesday morning at Rockingham Raceway in Corby and was greeted by fog and an arctic breeze enough to make me realise that my choice of wardrobe was probably wrong. But my reason to be at Rockingham was for the media day for the Renault Clio Cup series. Having seen first hand a championship last year at Donington I knew I was in for a memorable day. British Touring Cars has become one of the biggest motorsport events in the calendar and reaches an audience of millions thanks to its coverage on ITV4 and the internet. The Clio Cup has become a vital part of the BTCC weekend and is the stepping stone most drivers take into the BTCC. Last years Clio Cup winner and runner up Mike Bushell and Josh Cook are competing in this years BTCC.

The Renault Clio’s racing in the championship are based on the road going version of the Clio Renaultsport 200 Turbo EDC, a 1.6 litre turbo petrol engine that produces 220 bhp and a 6 speed sequential gearbox that is changed using paddle shift on the steering wheel. This years championship kicks off at the Brands Hatch Indy circuit. on the 4th of April, in all there are 18 races at 9 tracks.

In the morning media briefing there were a couple of driver unveilings, last years Ginetta Junior winner Jack Mitchell has joined racing outfit SVR and starts the championship as the youngest driver on the grid at just 16 years of age. and he won’t turn 17 years of age until after the first two races.

Another exciting addition to the grid for this year is Freddie Hunt, son of the late James Hunt who won the F1 championship in 1976. Freddie joins the Basildon based racing team Bubble and Kick Racing and looks to become a very popular driver with the fans. Having done a couple of passenger laps with him I am excited to see what battles ensue and hope he has a successful championship.

Having spent the day at Rockingham and seeing the commitment and skill the drivers have and the support the workshop crews give it promises to be one of the best seasons that the Renault Clio Cup has ever seen.