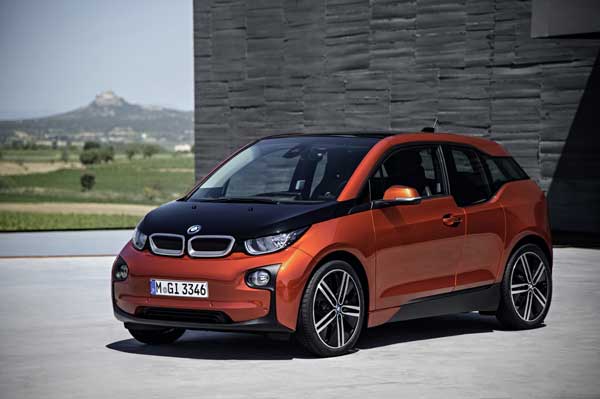 BMW has launched its first fully electric production car, the BMW i3. Geraldine Herbert was in London to take a closer looks at this all new car

With the traditional kidney grille it may be instantly recognisable as a BMW, but the i3 – which the luxury German car-maker unveiled to the world last week is about as new as a car can be.

From its carbon fibre and aluminium chassis to its recycled dashboard, BMW promises this “game changer” will overcome “range anxiety” yet still retain the same sporting DNA expected of a BMW.

The BMW i3 has a starting price of £25,680  (after the £5,000 Government Grant).  Due here in November 2013 there will be 46 sales agents across the UK who will offer the BMW i range. Each will have specialist technical capabilities allowing them to carry out repairs to the vehicles’ high voltage batteries.  A wider service network is planned to offer extended coverage for the general service, maintenance and repair of BMW i vehicles

BMW is offering two different versions of the i3, a pure electric model or one with a range extender. The pure electric version uses a 170bhp motor with 250Nm of torque to go from 0-62mph in 7.2 seconds.  Top speed is 150km/h and the range is between 80 – 100 miles

If “range anxiety” is a problem, the range extender i3 could be the better option. Using similar technology to that found in the Vauxhall Ampera the i3 Range Extender uses a tiny 34bhp 650cc two-cylinder engine which then keeps the battery topped up on the move. With a full tank of petrol, it extends the car’s range to approximately 100 miles. The added weight of the fuel tank does compromise speed by 0.7 of a second in a 0-62mph dash but more crucially its adds over £3,000 to the price tag. Leasing packages are available and start from £369 per month for a 36-month contract and a limit of 24,000 miles. 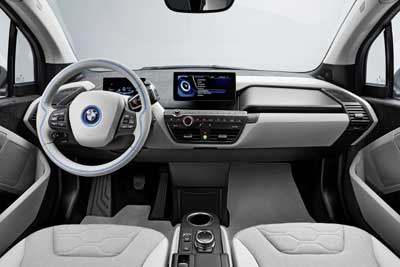 The instrument panel is made from a dried grass composite

Other efforts to ease “range anxiety” include roadside assistance and a navigation system that shows charging stations. Charging takes eight to 10 hours from a standard 240V socket, or you can have a BMW i Wallbox fitted at your home.

Inside the i3 is a strict four seater and despite its small proportions there is good space throughout and the capacity to carry four adults and luggage. BMW claim it has the same interior room as the 3-series saloon. In terms of dimensions it is slightly bigger all-round than an Audi A1. Similar to Ford’s B-Max there are no visible b-pillars in the i3 so when the doors are open there is wide empty space between the front and back seats, with no obstacles between them. The dash is a combination of plastic and hemp with a eucalyptus wood trim strip.

The BMW i3 also brings a number of unique features. Since weight is one of the key factors that limit an electric car’s range BMW used a carbon fibre reinforced passenger cell. Carbon fibre is 50% lighter than steel so the use of it allowed BMW to use a smaller and lighter lithium-ion battery that requires less charging time and increases range. The i3 weighs 1,200 kg, while the battery about 230 kg. 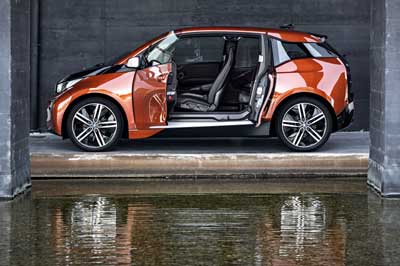 The plug-in hybrid BMW i8 sports car has also been confirmed for production and will be available in 2014.

When it comes to introducing new technologies, in most cases the companies that are first to market are those who enjoy the most success. BMW may be late to Team electric but the i3 is certainly one of the most eagerly anticipated. Electric Vehicles are still a niche market and while they are likely to remain that way for a while the arrival of a BMW electric car to the market is certainly a serious mark of confidence.

The all-electric BMW i3 Unveiling