The Celebrity and the Eco-Friendly Car

Home » Features » The Celebrity and the Eco-Friendly Car 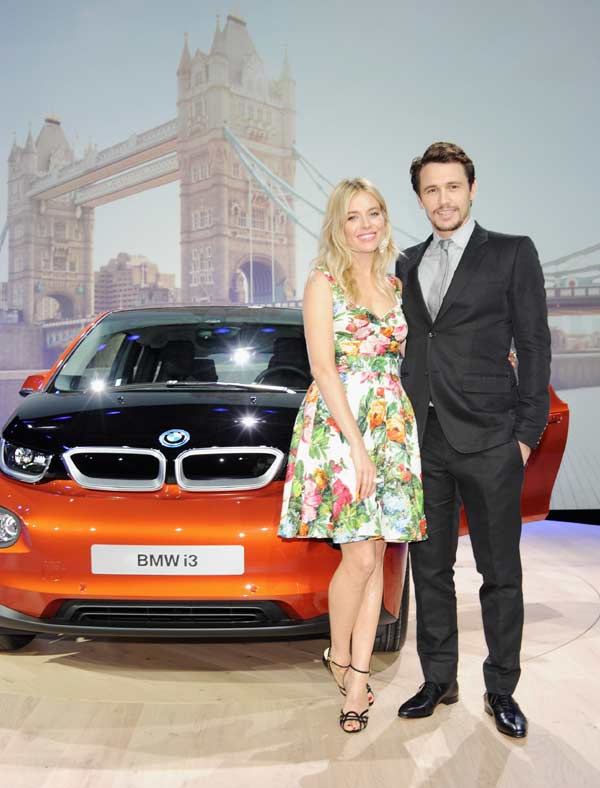 Sienna Miller and James Franco at the launch of the i3

BMW pulled out all the stops for the launch of the brand’s first electric car earlier this year. The BMW i3 was unveiled simultaneously in London, New York and Beijing and presented to the global public in a live broadcast from the three locations.

After the formal unveiling, BMW hosted a star-studded launch party in London where some 600 people joined star guests Sienna Miller and James Franco to celebrate the debut of the i3. Miller pouted prettily by the car and the Daily Mail gushed about how fabulous the star looked in a floral sundress.

At the launch Miller said, “Being a new mother I am very passionate about making green changes in my life to leave a better world for the next generation. 100% electric as well as stylish is something brand new which no one else offers making the BMW i3 the perfect city car for me”.

Praise for the car from the queen of boho-chic but what are the odds that Miller will actually take the i3 for a drive around town? The electric car and the celebrity seem like an unlikely combo. Surely electric or hybrid vehicles are only for vegan, sandal-wearing hippies?

Not so. Lots of celebrities like Cameron Diaz, Leonardo DiCaprio and George Clooney have been snapped driving eco-friendly cars. Just like Sienna Miller and James Franco, many stars are becoming brand ambassadors for electric and hybrid cars.

It’s tempting to say that high profile stars are endorsing electric cars to enhance their image and for the perks that go along with such a relationship with the carmaker. But some stars do genuinely care about the environment and campaign on green issues, so endorsing one is a good fit for them. For example singer Katie Melua is a strong advocate for social conscious and the environment and was appointed as a brand ambassador by Vauxhall in the UK for the zero emissions, electric Ampera. Sir Paul McCartney has spoken out on environmental issues and he drives a luxurious, but clean, Lexus LS600h. Driving and endorsing an eco-friendly car is a good way to show your fans that you practice what you preach.

When stars endorse electric cars or are spotted driving them it sends out a strong message to the public that green cars are ok to drive. Crucially, it’s “cool”. Over to James Franco who had this to say at the launch of the i3: “As a champion of art and design I love the way BMW has managed to combine style, functionality and technology. This car makes being green cool, which is really important”.

Of course the carmaker will benefit greatly from the relationship too. Sienna and James added a little razzmatazz to an event that would typically only been covered by the motoring press. Instead, the BMW i3 got a mention in the gossip columns and on the showbiz pages, (even if the audience was more interested in Ms Miller’s outfit than the technological intricacies of the new BMW i3!)

School Girl Beats Hundreds With Her Design For Eco-Friendly Mirage