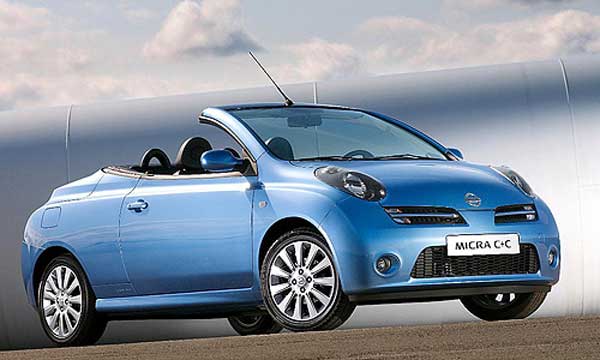 The Nissan Micra has carved out a loyal following thanks to its reliability and price, says Geraldine Herbert

Maggie was riding the crest of a wave following her landslide victory, Kajagoogoo were topping the charts and Return of the Jedi was the film everyone was talking about: the year was 1983.

It was also the year the NIssan Micra was launched in the UK. With its cute lines, curiously high-mounted headlights and cheeky face, it soon began to carve a loyal following among drivers.

Driven either by sentimentality or its pint-sized practicality, Micra drivers are particularly loyal and continue to swear by them.

For many of us, our first introduction to the Micra was as the car that we learned to drive in. Waterford native Danielle Barron, editor of the IMN, splashed out £200 on a 1997 Micra, her first car “I needed a small car to learn to drive in and it was perfect,” says Danielle.

“My dad bought it for me when I started learning to drive; he got it from a scrap yard and he and my brother painstakingly installed a clutch and gearbox as it came with neither.”

Beth Nunnington works in PR and social media, and learned to drive at the age of 17. “The Micra appealed because it had a feminine feel to it, plus it was small enough for me to feel comfortable and safe driving it.”

For others, the Micra has not only been a car to learn to drive in but has proved to be reliable and enduring family transport.

“Ever since that car,” says Marie, “I have only ever had Nissans – because they are just so reliable.

“My son drove a black 1999 Nissan Micra and my daughter now owns one.”

“It is all about reliability with Nissans; they are cheap as chips to run and never, ever let you down.”

Since the first car drove off the forecourts, the Micra has had somewhat of an image problem. Its looks didn’t win it fans everywhere, particularly in the fast lane of the M25.

And even when glamour was added with the launch of the Micra Coupe Cabriolet in 2005, this did little to change opinion.

Richard Hammond of Top Gear described it as “the most embarrassing car in the whole of human history”.

But despite his playing to the petrolhead gallery, the Micra has been popular with women drivers in all its varying guises.

“I’ve had it since new and I’ve never had a car that’s given me such value for money,” said Michelle McCormack, who is a retired driving instructor.

“I’m not concerned about how it looks or what people think about Micra drivers. It just goes on forever, although I do have it serviced regularly.”

A recent survey found that women are more likely to give their cars a name than men – and Micra owners confirm this trend.

“There is no love greater than your first car,” she says, “and when Lizzie had to go to the great scrap yard in the sky, I replaced her with another Micra.”

“I have nothing but good memories of that car,” says Linda. “One of the best was a journey from Glasgow to Letchworth, fully laden for a 600km journey with two kids and luggage, yet handling the motorway with great ease, and having used £40 worth of fuel to get there.”

While Val Robus, a photo-blogger , called her Micra ‘Bertie’, she has since traded it in for ‘Gilbert’, a Green Hyundai Getz.

So looks certainly haven’t put off anyone from buying the car.

The Micra has broad appeal, from learner drivers to young mums and families to more mature drivers seeking reliable wheels.

Throughout its four generations it has become an icon for Nissan and has remained reliable, practical and affordable. “I am not particularly car-proud,” says Siobhan Keogh, a university lecturer. “I just want it to go from A to B but it was so reliable I became a fan and when it came to replacing it I opted for a Nissan Almera.”

Love it or hate it, Nissan Micra styling leaves few sitting on the fence. But one thing that unites all Micra owners is the desire to buy a car that’s cheap to run, easy to drive and reliable.

Young people like its affordability, while older drivers love the fact that the Micra won’t leave them stranded by the side of the road.

With a restyled version in dealerships around the country, Nissan is convinced it will be able to seduce a whole new generation to the Micra.