Thinking of buying a hybrid? 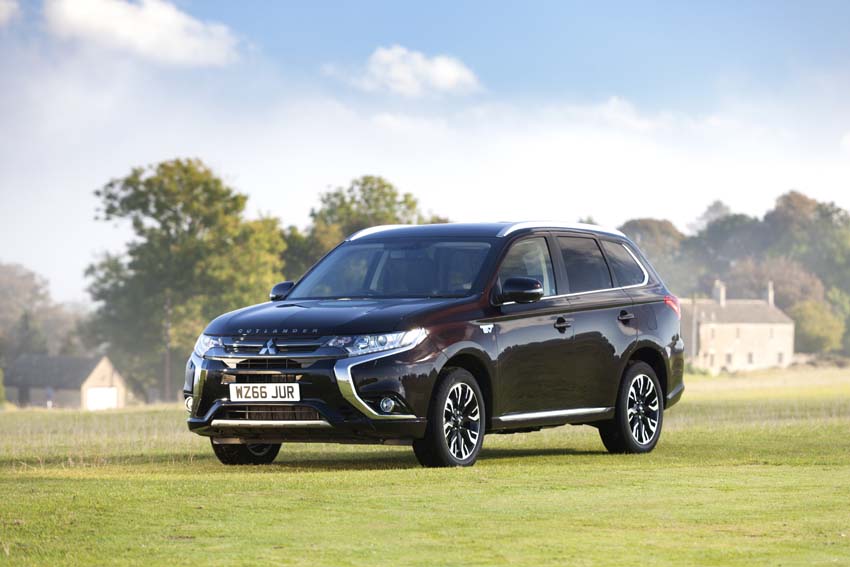 After months of deliberation working out whether a hybrid car will be cheaper, whether or not range anxiety will tip you over the edge and if in fact plugging your car into the mains is really the future you have come up with an answer. It is time to get shopping for your perfect hybrid vehicle which will satisfy all your needs and make you feel extremely smug with the quiet whir of eco independence. In this article I explore what the best options may be and make choosing your next car as seamless as a hybrid changing from fuel to electric power.

The original petrol hybrid, the Mitsubishi Outlander stands out in a lot of peoples minds as the first mainstream hybrid vehicle and it has certainly stood the test of time. The Outlander PHEV has shot The Mitsubishi brand into hybrid hierarchy and helped to gain a large market share in the PHEV market, this was helped by the fact it was the first plug in hybrid SUV and prices were kept the same as the diesel version.

The Mitsubishi features a 2.0-litre four cylinder petrol engine and two electric motors sitting on the front and rear axles, with a full battery charge the Outlander can complete 30 miles without using any petrol power, very useful if you only do short commutes around town and city. Motorway driving will lead to a dip in economy to around 40mpg as it will be running on petrol power only.

The conventional diesel Outlander features 7-seats, due to the added space needed for the batteries the PHEV only comes with the 5-seat option and a small amount of boot space is also taken up. Driving the Outlander is easy with its automatic gearbox which changes between gears and petrol and electric power easily and smoothly. There are buttons situated in the cabin which allow you save save up battery power and use it in town, there is also an option to increase engine breaking which also regenerates itself into battery power. 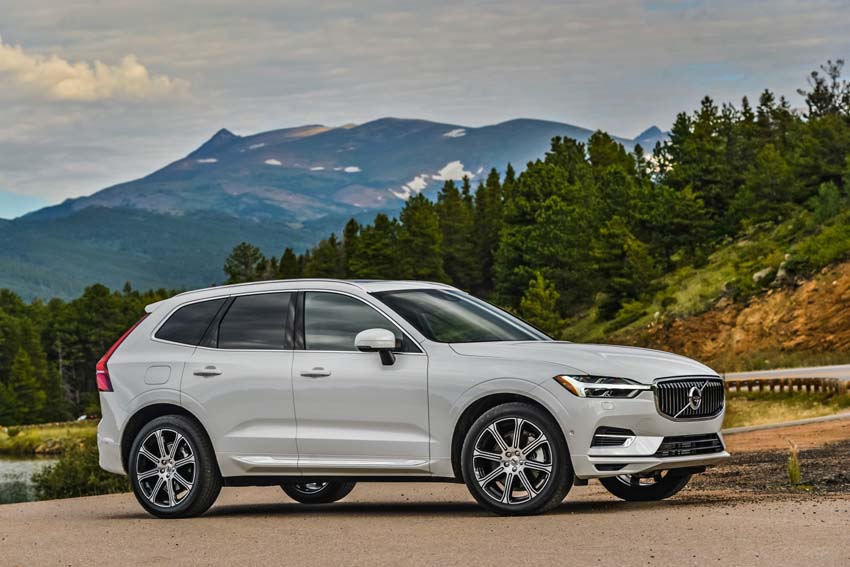 Volvo have really taken the hybrid market by the horns and are introducing a hybrid drivetrain to most of their new vehicles. The Volvo XC60 T8 has a 2.0-litre petrol kicking out 315bhp thanks to the fact its both turbocharged and supercharged, whilst the rear wheels are driven by an electric motor which adds another 84bhp. The XC60 is an extremely quick car getting from 0-62mph in just 5.3 seconds, but all this technology does come at a price and this does put it amongst some serious competition from Porsche.

Volvo claim you can get 28 miles range from a full charged battery and this is ideal for short commutes, the temptation to floor the throttle does mean that the combustion engine is called upon regularly and economy

takes a nosedive. There are five driving modes including AWD, Pure, Hybrid, Power and Off Road, choose the pure mode and it will only run on electric power. The immediate draw towards the XC60 is its exterior styling and interior luxury, it looks like a normal car which hybrids of past have failed to do and offers a complete package of performance, style and comfort. The Volvo XC60 with all of its power doesn’t have the same sporty feeling from its chassis and suspension, plumping for a more comfortable rather than engaging ride. As its a hybrid it has a Benefit in Kind figure of just 9% ideal for company car drivers but the high insurance, tax and purchase price makes this an expensive bit of kit. 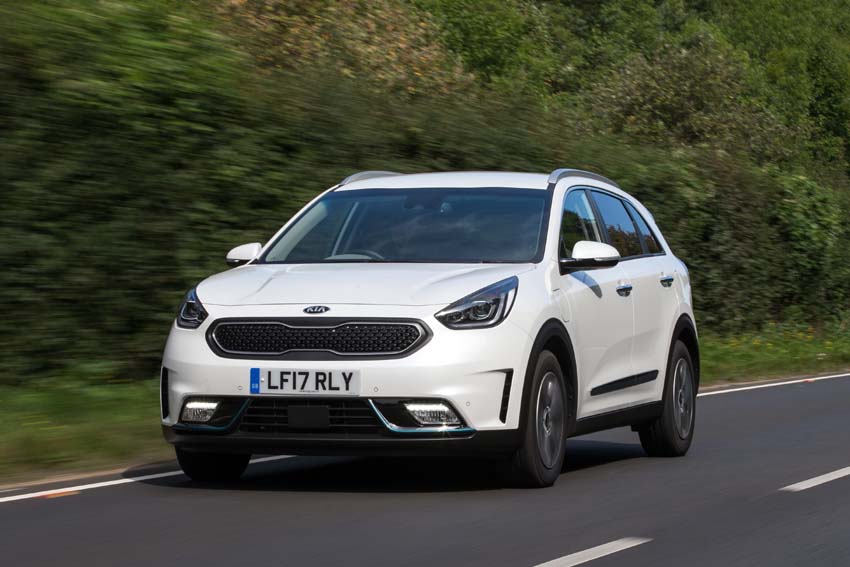 The Kia Niro offers hatchback proportions with a higher ride position, it looks like a normal small SUV but with the added hybrid technology under the shell. From the design stage the Kia Niro was always created to be a hybrid car from the get go so all batteries and electric motors have been integrated seamlessly without encroaching on interior space. The Kia Niro features a dual clutch automatic gearbox which makes progression smooth, although don’t expect acceleration to be lightning quick. To really benefit from the electric side of the hybrid the Niro does require plugging in, I charged the car up over night and got 36 miles of range, in the week I had the Niro I used hardly any petrol and was impressed with its economy.

The Kia Niro would be a perfect car for a small family as theres enough interior and boot space, the drive is comfortable and relaxed without being too sporty. Predictive energy control is a smart feature that uses the sat nav to tell the car when there is a motorway coming up or a hill climb so that it can adjust the way the car drives and how it uses its electric power.

The interior feels well put together and there is plenty of standard equipment on all three model ranges, with Kia you also benefit from a 7 year warranty. As the Niro is priced under the £40,000 mark it benefits from the first year being tax free 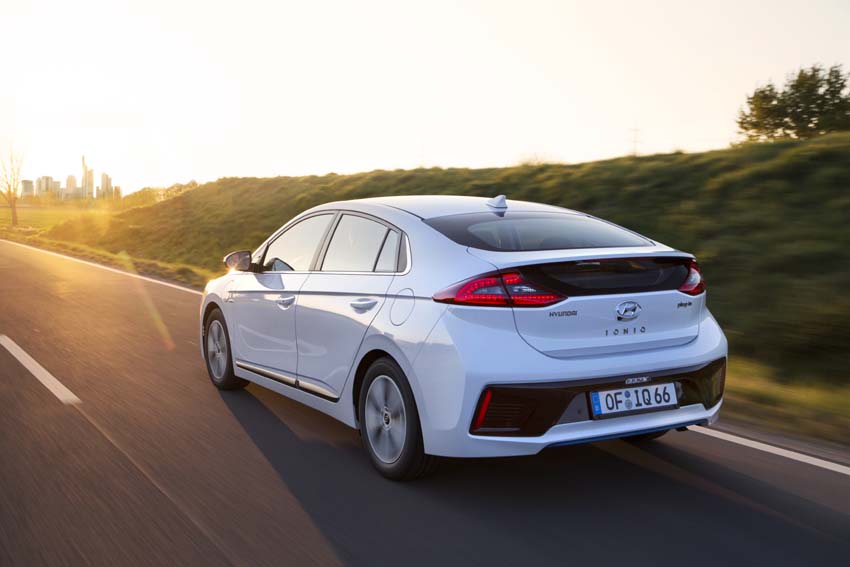 The Hyundai IONIQ is offered in three different power outputs. There is the hybrid, plug in hybrid and pure electric. From its exterior styling the Hyundai IONIQ is gunning for the Toyota Prius and aims itself at families and taxi drivers, the coupe styling aims to reduce drag and increase economy. Its not only the bodywork that helps economy but the IONIQ also features low-rolling resistance tyres and regenerative braking, although the braking isn’t the smoothest on the market.

Its rival the Toyota Prius does offer slightly better economy figures but only by a small margin, the low CO2 output means that the plug in hybrid is London congestion charge exempt and a full battery will give 39 miles of electric range.

Driving the IONIQ is pleasant with a comfortable set up which allows smooth driving, engine noise is minimal and gear change is mostly seamless, although acceleration isn’t particularly fast it certainly doesn’t feel underpowered. Steering is light which makes city driving a breeze, in fact the IONIQ is a superb city car which will appeal to taxi drivers in congested areas.

The interior is spacious and well equipped with plenty of equipment as standard such as an eight inch touch screen infotainment system which features Apple car play and Android Auto, the cabin is well put together with easy to use controls and a comfortable seating position. Some of the plastics feel on the cheap side and the grey leather interior feels dated. Boot space is 350 litres and there is plenty of room for adults in the rear.

The Hyundai IONIQ scored the top five stars when tested for safety by Euro NCAP and as with any Hyundai it has a five year unlimited mileage warranty.

The Toyota Yaris Hybrid doesn’t have the plug in option for recharging its battery, instead the battery is charged using regeneration from the 1.5-litre VVT-i four-cylinder petrol engine. This means the Yaris doesn’t have the added benefit of charging the car over night to have a full battery for the next day. The Toyota Yaris features an electric CVT automatic gearbox which works perfectly fine around the city but put your foot down and ask for more and you will really feel how underpowered the hybrid Yaris is. But this car isn’t really suited to long journeys and motorway mile munching, it is perfectly suited to town driving thanks to its small size and light steering, although if you live in the London Congestion zone you need the Yaris that has 15” wheels to be exempt from paying the charge.

The Toyota Yaris hybrid only comes as a five-door option, the interior has plenty of space and comes well equipped but doesn’t feel as well designed as other supermini rivals with its dated ambience and cheap plastics. One aspect that will appeal to drivers is the safety aspect of the Yaris, it scored a full five stars in its Euro NCAP test and all Yaris’s come with Toyota Safety Sense which includes emergency braking and lane depart assist. Toyota have always been seen as a fairly reliable brand but it does come with a five year/100,000 mile warranty should any problems arise. The Toyota Yaris doesn’t have much in competition yet especially as Honda discontinued the Honda Jazz hybrid but the electric Nissan Leaf is a similar rival to the Yaris.

Hybrid; is it the future