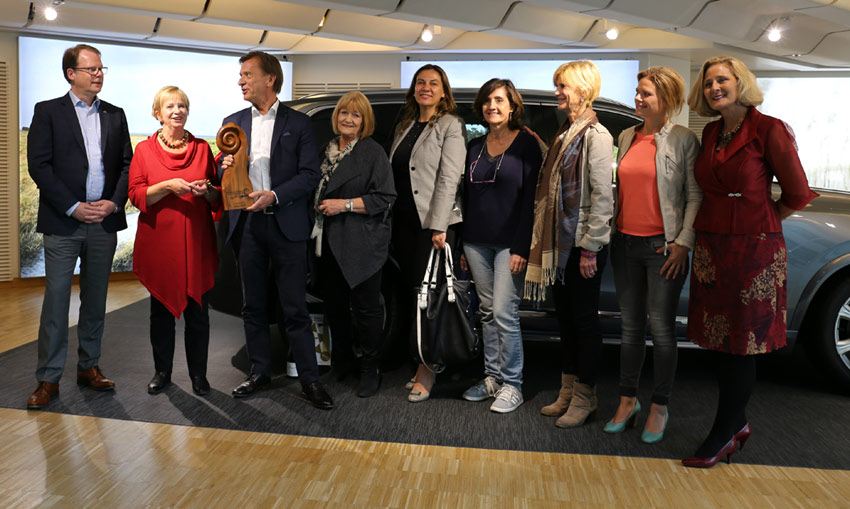 “Our design concepts are just one aspect of where we are headed,” he said. “Another indication is that we are here today to acknowledge a very important segment of our customer base.”

Samuelsson was referring to receiving the prestigious Women’s World Car of the Year award for the Volvo XC90. The presentation took place at Volvo Group headquarters in Gothenburg, Sweden, on 20th May, 2016.

Seven of the twenty-two women jurors were in attendance. Countries they represented are the United Kingdom, The Netherlands, New Zealand, Spain, Turkey and the USA.

Sandy Myhre, New Zealand, presented the trophy for the supreme award – a hand-carved wooden trophy depicting a curled fern frond known in her country as the koru.  The sculptor was Hugh McKechnie from Kerikeri in the Bay of Islands, New Zealand.

LouAnn Hammond, USA, presented the certificate for the XC90 winning the SUV-Crossover category and surprised Mr. Samuelsson with a signed bottle of her hometown California wine, grown and produced personally by race car driver and Vintner Scott Pruett.

The women motoring writers also had the opportunity to discuss Volvo’s future cars with executives, including the company’s Senior Vice President, Research & Development, Peter Mertens, and were given an overview of Volvo’s autonomous self-driving program that will begin next year.

It’s the first time Volvo has hosted a press event just for women. Given the line-up of cars already earmarked for the brand’s future, Mr. Samuelsson suggested it would not be the last.