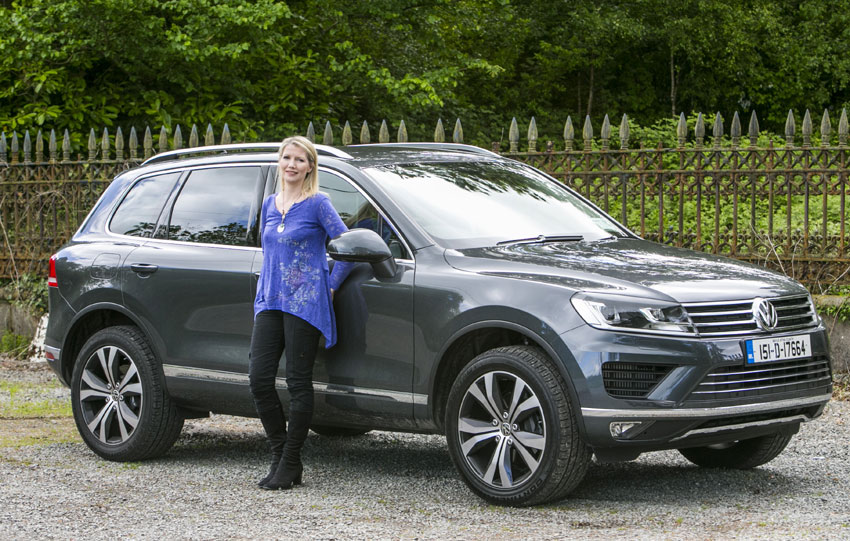 What is it?  The new Volkswagen Touareg first appeared in 2002 and was updated in 2010. For 2015 it offers more equipment and smarter styling  for a lower price tag.

Who is it aimed at?  With only five seats the Touareg  is best suited to a small family who want an SUV that’s good to drive both on and off road.

Styling? Compared to many rivals the Volkswagen Touareg is positively discreet, so appropriately the latest version is a subtle refresh. Apart from some minor design tweaks front and rear and a reworked four-bar grille, it looks pretty much the same as the previous version outside but inside it’s even more up-market, with lots of soft-touch materials and electronic wizardry.

Under the Bonnet? Powering the Touareg is a 3.0 litre diesel engine that ranges in output from 204bhp to 262bhp. Our test car was the lower powered version, it is punchy but smooth and it comes with an eight-speed automatic transmission that shifts gears seamlessly.

What about inside? Inside it is familiar VW territory and all the controls are logically laid out and the quality throughout is good but there is no denying a certain sombre solemnity to it all. The high seating position gives great visibility though this elevated view of the world is just as likely to be obscured by another SUV or crossover in the adjacent lane. The boot is well shaped and a decent size at 580 litres – extending to 1,642 litres with the rear seats folded but while space is good throughout and there is plenty of legroom front and rear, the Touareg is a five-seater only without a seven seat option.

On the Road? Behind the wheel, the Touareg feels much more like a beefy Golf than a full-size SUV. At slow speeds, it is absorbent and plush and barely swayed through corners. The changes to the steel-sprung suspension are evident and the car is more agile than before. The steering response is quick, it grips the road very nicely and on motorways it swept silently along. The 4MOTION all-wheel-drive system sets the car up for on or off road conditions with the simple turn of a knob. A trip around an off-road course proved that it is more than capable of surmounting any likely challenges.

And Safety?  The new version of the Touareg hasn’t been tested by Euro NCAP, however based on the safety features included and the track record of other VWs its probably safe to assume that even under the new and more stringent tests it would perform well.

Will it break the bank? Prices for the new Touareg start at £43,000 (RRP OTR), rising to £47,500. In addition, fuel saving measures introduced along with lower rolling resistance tyres has reduced the fuel consumption to 42.8 mpg and CO2 emissions to 173g/km.

Verdict? There is much to like about VW’s flagship SUV but this is a cut-throat market and the Touareg faces stiff competition from the likes of the Mercedes Benz M Class, the Range Rover Sport and BMW’s X5. In addition, Volvo have just launched their all-new XC90 and from within the VW group the second generation Audi Q7 has arrived at showrooms. At £43,000, this five-seater SUV is not a viable option for many families but if you are looking for an off-roader that is car-like on the road, capable off it and economical to run, the VW Touareg should be on your list to test drive

Why you won’t? Five seater only;  Not the most efficient