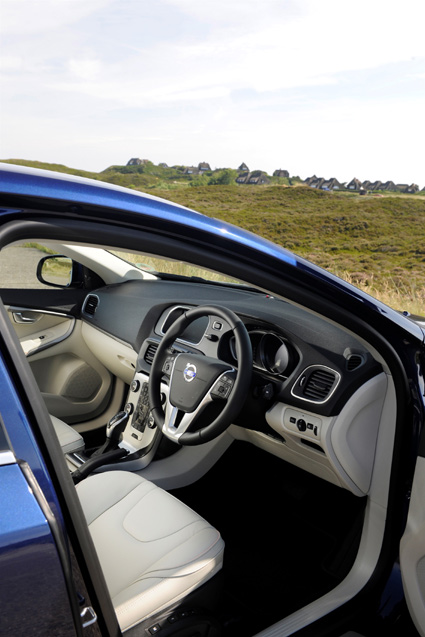 What is it? It seems that Volvo have finally produced a car that can compete with the best in the hatchback market. The Volvo V40 certainly looks the part but it will need more than looks to take on the best. Can Volvo finally crack its rather boring reputation and appeal to the younger market.

Who is it aimed at? The size lends itself well to people who don’t need too much space, although a young family with one child would have enough room. The poor visibility out the back could make it hard for older people to drive and park. The looks and range of engines help it attract many different ages of buyers. The diesel engines are also a great choice as a company car.

What about Styling? The V40 predecessor was the Volvo C30, and although the design wasn’t too bad (apart from the rear) it never really set hearts pulsing. The V40 now as a styling package fits the bill, the car has deep set flanks that originate from a sloping front end. The windows come to a point at the C pillar, and although completely impractical, do look good. The R-design spec does give a sharper and sportier look to the car with add ons such as twin exhaust, 17” alloys and a unique grille.

Under the bonnet?There are plenty of engine options available, three diesel and two petrol. The D2 120 bhp diesel was fitted to the test car and this has the least amount of power in the range. The D3 has 150 bhp and the D4 tops the diesel power plants with 190 bhp from a 2.0 litre. The petrol variants such as the T2 produces 122 bhp and the T3 produces 152 bhp. The D2 engine is the most economical but that comes at a price on performance, acceleration is sluggish which doesn’t fill you with much confidence when overtaking. The manual gearbox isn’t the smoothest with notchy changes, but all engines can be paired with a manual or auto box.

What about inside? The Volvo V40 is set out very different and if you aren’t used to a Volvo dash then it may take longer to get used to. The controls are bunched together and can be hard to work. The cabin space is comfortable with plenty of adjustments, there are controls on the steering wheel for cruise control, radio and bluetooth. The digital speedo is easy to read and three themes are available depending on your driving preference. The boot space isn’t the biggest in the class with 335 litres, but there is a false floor which is handy for hiding things in.

On the road? With its more sporty looking stance the V40 holds the road very well, steering is responsive, but the suspension feels too hard. Volvo’s Dynamic Chassis doesn’t soak up the awful bumps on the British roads and the ride becomes fidgety. The 17” alloys as standard don’t seem to hinder the ride but I would recommend against optioning in larger wheels. On long journeys the V40 is extremely comfortable and able companion.

And Safety?  The safety list for the V40 is monumental, and to be honest coming from Volvo I wouldn’t expect anything else. There is the renowned SIPS (Side Impact Protection System, Whiplash protection system, stability control and blind spot recognition system just to name a few. Receiving the full 5 stars on the Euro NCap and scoring 98% for adult occupancy protection means the V40 is the safest in its class.

What are my Options? The top trim levels come with plenty of kit, some of the lower specs can be optioned with a rear parking camera (£375) cruise control (£225) and a fixed panoramic sunroof for £1000. If you are feeling really brave and know a good Chiropractor than the lowered sports chassis is available for £500.

Will it break the bank? I found the Volvo V40 the most economical car I have tested up to now. The D2 has combined figures of an impressive 78.5 mpg and emits just 94 g/km of CO2, this makes it extremely attractive to company car buyers as it also has no road tax to pay. The D4 diesel which is the most powerful diesel also does very well with a combined figure of 74.3 mpg and 99 g/km of CO2. Even if you are not a fan of diesel then the petrol T2 has a claimed combined mpg of 51.4.

So the Verdict? Its nice to be pleasantly surprised sometimes and with the Volvo V40 I was, the ‘old man’ reputation has been swept away and in its place is a great car. Volvo haven’t strayed from what they do best and that’s making very safe cars. The V40 has a huge amount of trim levels and engines to suit everyone, rear visibility isn’t great and the ride is too hard but the frugality and styling of the V40 lets you forget its little imperfections. The Volvo V40 has entered a tough market but is definitely worth its place fighting with the big boys.

Why you won’t? Visibility; harsh ride