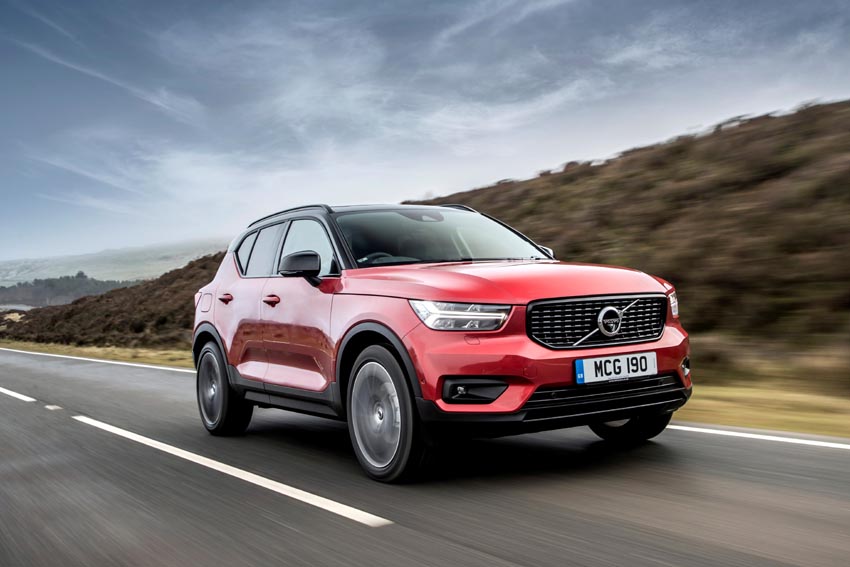 There is much to like about Volvo’s smallest SUV the XC40 writes Hannah Gordon.

What is it? The new Volvo XC40 is the first small SUV Volvo have ever made and it has been scooping awards since it launched including car of the year at the Geneva Motor Show in March and was last week voted Car of the Year by the Women’s World Car of the Year jury

Who is it aimed at? A pocket size SUV is perfect for small families and town drivers alike, there are plenty of engines to chose from and automatic and manual choices. The XC40 is a comfortable car with huge amounts of safety tech that gives people a great sense of protection.

Styling? Exterior styling is kept in line with its larger siblings the XC60 and XC90 with the familiar headlights with the ‘Thor hammer’ daytime running lights, the front end is blunt and brutish with lines carrying on down to the sides culminating in a high line to the tailgate. This thick C pillar design can make visibility out the rear corners difficult. Plenty of colour options are available with roof and wing mirror personalisation a key feature of the funky XC40 design.

Under the bonnet? Available with the choice of a 1.5-litre and 2.0-litre petrol engine or 2.0-litre Diesel engine with various power outputs and front wheel drive or all-wheel-drive. The T3 1.5-litre three-cylinder petrol engine is ideal for city driving but only comes with the option of a manual six-speed gearbox. The eight-speed automatic gearbox is available with all Diesel engines and the 2.0-litre petrol engines. If you intend to cover plenty of miles and don’t want to hammer the engine overtaking then the D3 and D4 diesels are perfect and give great economy in return.

What about inside? The interior is a step above plenty of the XC40’s competition. A large 9-inch infotainment screen fills the centre console and involves most of the car’s functions within it including satellite navigation, DAB radio, climate control and safety features. Although the dash is now very low on physical buttons the use of the iPad style touchscreen is rather fiddly and does require concentration being diverted away from the road.
The seating position is excellent with plenty of adjustment on the seat and steering wheel, interior quality is very good with materials feeling robust. Cabin space is plentiful and the boot space is good.

On the road? Volvo produce excellent cruising vehicles and the XC40 is no different, on the road, it is comfortable without being exciting. Depending on what engine is chosen mostly cabin noise is kept to a minimum, the 1.5-litre petrol as tested did grumble when accelerating hard, the automatic options would lead to a more civilised journey. Body roll is minimal and even with the large wheel and tyre combos, the ride doesn’t feel too stiff.

What about safety? It is what Volvo do best and the XC40 is really leading the way in safety features as standard, included is city safety which detects objects, front collision warning, fully automatic emergency braking, oncoming lane mitigation with steering assistance, run-off road protection which automatically tightens seatbelts should the car leave the road.
The XC40 has also gained the full 5 stars in the Euro NCAP safety rating.

What are my options? Volvo put extras into packs such as the Xenium pack which includes a panoramic sunroof, parking camera and park assist for £1600, the Convenience pack which has power folding rear seats and headrests, flexible load area, under seat storage, extra 12V socket and load protection net for £350. Smartphone integration that includes Apple Car Play and Android Auto is an option that I would always choose and costs £300 on the XC40.

Will it break the bank? Pick the entry-level 1.5-litre petrol and CO2 emissions are 144g/km with 45.6mpg. The most economical option for the savvy savers amongst you is the D3 FWD manual which states a CO2 output of just 127g/km and combined mpg of 58.9.

So the verdict? From the huge success of Volvo’s previous SUV’s the XC40 has the pedigree to be a huge success. Styling sets it apart from its rivals and the large range of safety equipment as standard makes the XC40 a brilliant choice for people. Quality is apparent throughout the whole car and comfort is a major plus, the only downside is the fiddly infotainment system which would become more familiar to use after some time. The XC40 can be personalised which appears to the younger market thanks to its funky colour combinations.

Why you won’t?  Price; Infotainment system