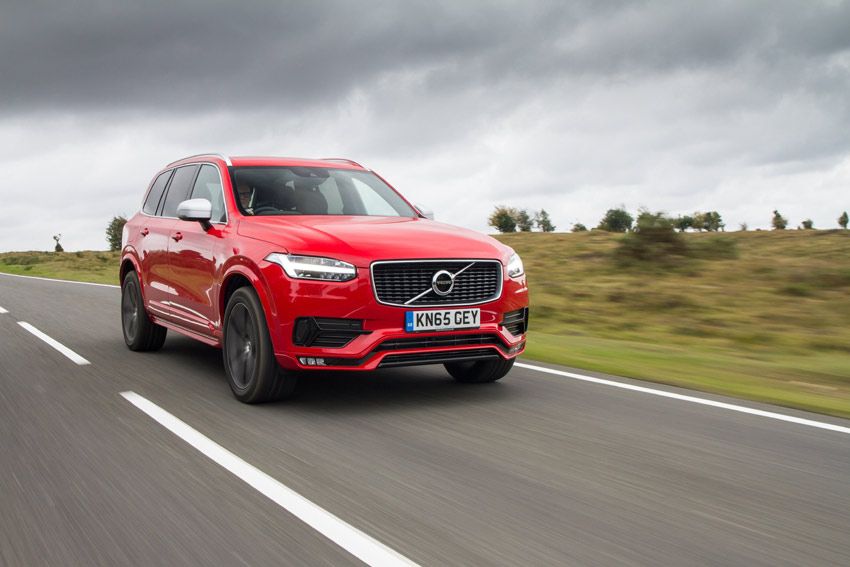 What is it? The long awaited arrival of the new Volvo XC90, gone is the dowdy image and in its place is a new luxury SUV.

Who is it aimed at? The Volvo XC90 is a massive 7 seater all-wheel-drive vehicle and lends itself very well to a family environment, the spacious dimensions mean that 5 adults can sit comfortably within the XC90. Whilst it is capable off-road the majority of purchased XC90’s will never touch tyre on a muddy terrain.

What about the Styling? What a breath of fresh air the new Volvo XC90 is, the styling is typical of the Swedish companies recent vehicles and features the ‘Thor hammer’ front headlights. The XC90 is well proportioned and in the R-design guise it includes a sporty grille, matt silver wing mirrors, tinted windows and 20” alloy wheels. It is an imposing vehicle which goes head to head with the likes of the BMW X5 and the Audi Q7.

Under the bonnet? There are three engine options available with the R-Design, there is a T6 petrol with 320 bhp, the D5 Power pulse diesel with 235 bhp and the T8 twin engine which is a petrol plug-in hybrid. The D5 diesel will be most peoples choice as the petrol is fairly thirsty and the plug-in hybrid expensive. The D5 has Power pulse technology which reduces turbo lag, the only gearbox available is the 8-speed automatic which is no bad deal as it is smooth and direct. The D5 engine is quiet and goes about its business with ease, 235 bhp also means that its no slouch. 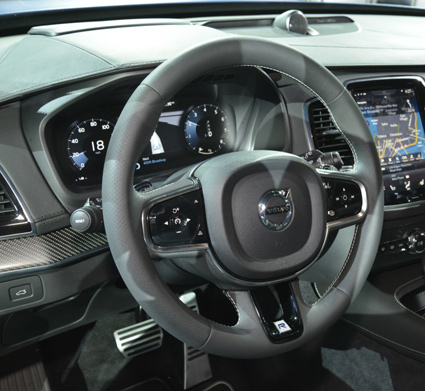 Inside, gearshift paddles, plus the Contour sports seats and perforated leather steering wheel and gearshift knob are accompanied by special R-Design details

What about inside?One of the first of the new Volvo’s to not have the ‘floating’ style dashboard, instead in its place is a large 12.3” touch screen, almost like an iPad which controls all the cars features such as heating, driver controls and of course the multi media aspect of it all. This frees up the dash to make it simple for the driver. The R-Design spec includes a lovely set of sport seats made from leather and nubuck which are extremely comfortable even on long journeys. The space within the XC90 is cavernous and the boot can hold 451 litres with the seats up. The middle row of seats are easily laid flat should you need the extra space.

On the road? For something so large the Volvo XC90 handles itself very well on the road, although it has to be said its not the most engaging to drive it certainly doesn’t leave you disappointed. The steering is direct and the engine performs well. Suspension is good over rough terrain and you can also pay extra for added electronic air suspension. be aware that the R-Design does come with 20” wheels which does mean that the ride suffers slightly but after a while you wouldn’t really notice. The R-Design does include drive mode settings Eco, Comfort and Dynamic, this changes the systems within the car such as suspension, brakes, engine response and climate control.

What about Safety? I feels like the Volvo needs no explaining on its level of safety equipment, the XC90 scored a full 5 stars in its Euro NCap safety award and features a lot of cutting edge technology. As standard the XC90 is fitted with City Safety, Pilot assist and adaptive cruise control which makes the XC90 a semi-autonomous vehicle that can steer and brake for you.

What are my Options? Already bursting at the seams which technology even a standard XC90 will come with an extremely generous equipment pack. Optional you can purchase Apple car play for £300, Blind spot and rear collision warning for £500, the Xenium pack which includes a panoramic sunroof, park assist and a 360 degree camera will be an added £2000. The electronic air suspension for greater comfort will set you back another £2150.

Will it break the bank? For such a large car and an AWD system economy isn’t going to be the greatest but Volvo have made the XC90 as frugal as possible. The D5 diesel engine emits just 149 g/km of CO2 and claims a combined MPG of 49.6, this means annual road tax is £145. The petrol isn’t worth getting if economy is of concern but the petrol plug-in hybrid emits just 49 g/km of CO2 and has an MPG of 134.5. This means the T8 has free road tax but the initial outlay is £14,000 more expensive than the D5.

So the Verdict? The Volvo XC90 has a bulging awards cabinet, and it is easy to see why. It doesn’t have the snobbery of other SUV’s in its class and is hugely refined, comfortable and includes an impressive level of equipment. The R-Design benefits from some exterior styling tweaks as well as the lovely seats which is one of my favourite features of the car. The level of safety, usability and space make this an ideal car for a large family. The best engine to chose is the D5 diesel, its the cheapest, and although the petrol plug in hybrid has better economy its huge starting price is a major downfall.

Why you won’t? Price

Watch the video of Hannah testing the XC90

Watch the video of Hannah testing the XC90