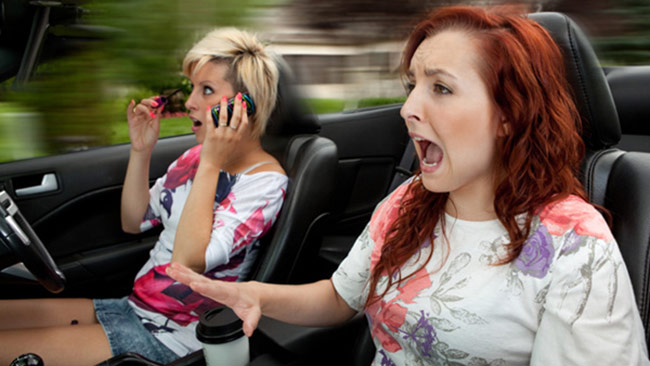 The mood in Saudi Arabia is finally changing and on the 26 October Women are being called upon to defy the ban and drive. But as support grows one Saudi cleric says driving risks damaging women’s ovaries. Sandy Myhre responds…

Last year the Mayor of the German town of Triberg introduced women-only parking spaces because, he said women were worse at parking than men. The wider spaces are better lit, marked with a female symbol and not next to any concrete pillars. Mayor Gallus (rhymes with phallus) Strobel then revealed the real reason behind this considerate gesture. “While they’re at it,” he sold Der Spiegelmagazine “they can see the town’s attractions.”

He suffered worldwide criticism when all he wanted to do was promote tourism but he was successful. Following his comments tourists flocked to the town to try out the parking spaces. His lateral thinking is catching on.

A shopping centre in the Chinese city of Shijiazhuang built a car park with spaces nearly a metre wider than normal and just for women drivers. The parks were painted in a delicate pink and light purple and according to the manager Mr Wang (rhymes with bang) Zheng, these pretty lines would appeal to women’s “strong sense of colour and different sense of distance.” Furthermore, female parking attendants were employed to guide the female drivers into their berths.

Given the reasoning applied to gender-specific wider parking spaces, surely having women guiding women drivers is the blind leading the blind? And women aren’t the only problem drivers in China when you consider there are more than 200 road accident deaths there every day.

It took scientists from a German university conducting research into the “spatial intelligence” of women to conclude that spatial performance (part of which involves getting a ginormous car into a ridiculously small space) is sensitive to hormonal fluctuations during the menstrual cycle. It means we’re dangerous at a certain time of the month but it surely didn’t need a collegial geek on a grant to point that out. Ask any bloke.

Come to think of it, pedestrians need somewhere to park too. Maybe town seats sited in the middle of nowhere could be painted pink and purple so women with spatial difficulties and a fondness for colour could plonk themselves down after shopping and without scraping pillars. Better still, ban all women from driving. They do in Saudi Arabia and there’s a reason for it. Blame the ovaries and upward thrusts of the pelvis.

Yes, driving can affect not just a woman’s child-bearing properties but her kids as well, at least according to a judicial advisor to an association of Gulf psychologists. Sheik Saleh bin Saad al-Lohaidan is reported to have suggested that if a woman drives a car not out of ‘pure necessity’ it would have negative physiological impacts.

“Functional and physiological medical studies show that (driving) automatically affects ovaries and pushes the pelvis upwards,” he said. “That’s why we find those who regularly drive have children with clinical problems of varying degrees,” he added while not citing specific medical studies to support his argument.

But the Middle East is not alone in singling out women drivers. A couple of years ago Bernie Ecclestone, the man who tacitly heads the sport of Formula One, scored an own goal when asked in a television interview if American driver, Danica Patrick, could make it to Formula One. “Women should wear white, like all the other kitchen appliances,” he opined. It was probably meant as a joke but it backfired quicker than a car with fuel mix problems and the old adage about fools opening mouths to confirm their status springs immediately to mind.

Motor racing is replete with such men of similar intellectual rigour. Former world champion, Mika Hakkinen, reportedly suggested he’d welcome women into Formula One “as long as they were pretty.” Danica Patrick can sleep at night knowing this. This is the same man who drove a McLaren Supercar – which has two seats in the front and one for the driver slightly behind those. “Good design,” mused Hakkinen. “One seat for the wife and the other for the mistress.” Still, he exhibited more animation with this utterance than he ever did at his post-race press conferences.

Then there’s the driver of an historic car fussed over whether a female journalist should accompany his group from New Zealand on an overseas racing foray. “What will my wife say?” he whined, appearing to mistake one ancient profession for another and confirming that his line of thought pre-dated his racing steed. And this in a country where women were the first in the world to receive the vote.

Sandy Myhre is a female motoring journalist of many years standing, and president of the Women’s World Car of the Year organisation.